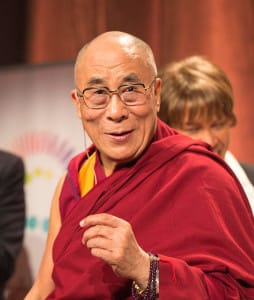 Earlier this week the Dalai Lama called on Buddhist centers to host academic pursuits and interreligious dialogue. According to The Tibet Post, the Tibetan spiritual leader made the appeal to a group of about 300 people who gathered at Deer Park Buddhist Center in Wisconsin on March 6, 2016 to hear him speak.

“It would be better if [Buddhist centers] were not only temples for worship, but centers of learning,” he said.

His Holiness noted that over the past 30 years he has engaged in discussions with modern scientists, allowing him to analyze and investigate the Buddha’s teachings. He hopes that the treatment of Buddhist centers as classrooms would bring this same kind of learning to the non-ordained.

“Since you have people here who are well-qualified to explain the teachings, you should hold classes about the science of mind that can appeal to everyone,” he said.

His Holiness also suggested that Buddhist centers initiate interreligious dialogue, as many virtues of Buddhism can be found amongst Christianity, Judaism, Hinduism and Islam.

“All the major religious traditions convey the same message of love, whether they teach about a creator or not,” said His Holiness. “If we are to create a happier humanity and lead more meaningful lives, we have to learn to show each other greater love and affection.”

Buddhism has intersected with different religions and education repeatedly over the past year. A children’s camp was held this past summer in at a Buddhist center in France, bringing the Muslim Scouts of France and the Buddhist-based Nature Scouts into a together for one week. Scientific studies have also announced new findings on Buddhism and neuroscience, such as the influence of Buddhist concepts on behavior, and the validity of Buddhism’s view of the self.

The Dalai Lama himself previously warned against the downfalls of religious division and urged for Buddhism to be brought into academia, as demonstrated by Melvin McLeod’s 2007 report, Educating the Heart, in which His Holiness suggested children learn compassion through school curricula.