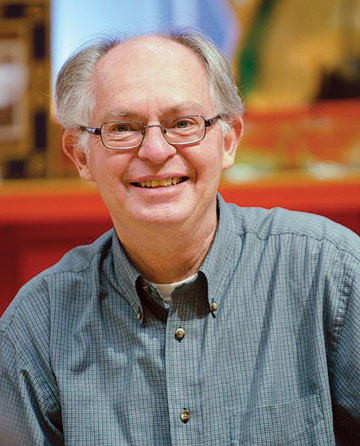 Buddhist teachings have been changing and evolving from the beginning, says scholar Roger R. Jackson. He suggests some ways they can be updated to reflect modern values and knowledge.

When I mentioned to my wife that I’d been asked to write a piece on “updating the dharma,” she commented, “It’s not the dharma that needs updating. It’s our minds.”

She was right, of course. The Buddha himself famously remarked that whether enlightened beings appear or not, the way things are and the way we ought to live remain constant. What’s more, the basic ideas and practices of Buddhism have provided deep personal and cultural meaning to countless people for 2,500 years. So, what’s to update?

Yet Buddhist teachings and doctrines have been updated right from the beginning. Responding to changing audiences and circumstances, the Buddha gave a wide variety of teachings over his forty-five-year career. His successors in Asia and beyond, both premodern and modern, followed suit. They adapted doctrines, myths, rituals, symbols, and institutions to meet their own historical situations, knowledge systems, and cultural values, while attempting to preserve the essential Buddhist message as they saw it.

Contemporary Buddhist attempts to align Buddhist teachings with, say, feminism, science, or environmentalism, are thus no different—and no less justified—than premodern Burmese efforts to integrate the Buddha into indigenous pantheons or Chinese efforts to read filial piety into Indian Buddhist sutras. They are all “updating” the dharma to assure it continues to speak to the hearts and minds of suffering beings in their own place and time.

Many aspects of the dharma have never been “updated” or changed—nor should they be. These include Buddhism’s emphasis on the primacy of mind, its realistic account of suffering, its insight into impermanence, its detailed analysis of mind and emotions, its subtle exposition of psychological and moral causation, its insight into no-self/emptiness, its stress on meditation, its vision of spiritual freedom, its inspiring artistic expressions, and its altruistic ethics. All these fundamentals have carried across generations and continents, and they need no revision.

At the same time, like our forerunners, we modern Buddhists are justified in adapting certain elements of the tradition to our own setting, knowledge, and values. Most of these adaptations have already been set in motion, so nothing I mention here is new. These fall into three major areas: (1) social and political values, (2) myth and ritual, and (3) cosmology and metaphysics. In each case I will suggest certain updates, but also add caveats.

Buddhism developed within Asian societies that, with rare exceptions, took for granted various social hierarchies: ruler over subject, male over female, elder over younger, elite over common, teacher over pupil, religious over lay.

The egalitarian ideals of our own society (far from fully realized, of course) resist most such hierarchies. In Buddhist contexts, this means experimenting with more democratic forms of institutional organization and spiritual leadership, so that the role of teacher may devolve upon anyone who is suitably qualified, regardless of gender, ethnicity, sexual orientation, age, social class, or ordination status.

It also means that discrimination on the basis of any of these factors within Buddhist communities must be resisted, and that abuses of power by those in authority must be exposed and punished—regardless of the status of the abuser or the casuistry employed to justify the abuse.

More broadly, this entails political engagement at the societal level, to help assure that institutions and policies are conducive to human flourishing in general and dharma practice in particular—not to mention the very survival of sentient life on our planet.

Caveats: Pure democracy may be no more feasible—or advisable—in a sangha than in modern nation-states. Hierarchies may not be as natural as assumed by traditionalists, but there is something to be said for vesting a degree of authority in those with greater knowledge and experience of the dharma, both for ease of administration and the spiritual advancement of sangha members.

Indeed, as long as we distinguish between teachers and pupils in our larger society, we will do so in spiritual communities as well—since a sangha is, in the broadest sense, an educational institution. And if traditional Buddhism sometimes was ritually and contemplatively oriented at the expense of political critique, so politically-engaged Buddhism may run the risk of drowning the inner life in a sea of outward engagement.

Past Buddhists often took their myths to be exact representations of the lives and deeds of enlightened beings and the origin and structure of the cosmos. As moderns informed by critical consciousness and the discoveries of science, we cannot easily summon such belief. What we can do is to retell the stories in our own idiom, seeing them as psychologically or existentially meaningful, even if not literally true.

Similarly, traditional Buddhists typically ascribe real-world efficacy to their rituals, which often are intertwined with myths. Modern Buddhists sometimes reject rituals as ritualism: the mindless and pointless repetition of words and actions. When they do practice rituals, they often, and reasonably, perform them in their own language and interpret them as meaningful symbolic acts of body, speech, and mind, even though they may doubt the ritual’s effect in the world outside the ceremony. Many make ritual subservient to meditation, which they take to be the essential practice of Buddhism.

Caveats: Traditional myths and rituals may have more truth and potency than we imagine. In any case, premodern Buddhists sometimes had more critical consciousness than we give them credit for. They often took their myths not literally but as inspirational stories, and understood their rituals less as magical interventions in the operations of the cosmos than as significant ways to enrich their interior life while strengthening community bonds. And those who contrast meditation to ritual should remember that meditation itself is a ritual, consisting of repeated, patterned mental, verbal, and physical acts. This is so even in “formless” practices like Zen or Dzogchen.

Traditional Buddhism describes a universe in which sentient beings wander from rebirth to suffering rebirth propelled by deluded deeds and actions, but eventually will achieve enlightenment by overcoming delusion and perfecting ethical conduct, meditative absorption, and realization of the nature of reality.

This dramatic vision is certainly at odds with the skepticism of modern philosophy and the materialism of the natural and social sciences, according to which our knowledge is always limited, there is no life after death, and spiritual perfection is a chimera.

Accordingly, many modern Buddhists have interpreted traditional doctrines symbolically, psychologically, or existentially. For instance, they may see rebirth as a symbol of the various experiences we undergo in a single life and regard so-called enlightened beings as human exemplars of ethical and intellectual virtue, but not as perfect beings. This allows us, as moderns, to reshape the dharma in terms that are meaningful within our own frame of reference.

Caveats: Taking traditional Buddhist cosmology and metaphysics solely in symbolic, psychological, or existential terms deprives it of much of its magnificence and urgency, and threatens to reduce it to an exotic form of secular humanism. As a wise Buddhist nun once asked me, “If there’s no rebirth and no traditional buddhahood, why are we going to all the trouble of being bodhisattvas?”

Also, we must recall that our current knowledge of reality is simply a replacement for earlier understandings of reality, and is itself certain to be superseded in time, and in ways we can’t now imagine. Indeed, while some details of Buddhist physical science don’t stand up to scrutiny, the overall cosmic vision of Buddhism has thus far neither been proven nor disproven, nor is it likely to be anytime soon. We do best, I think, to modestly recall Hamlet’s remark to Horatio: “There are more things in heaven and Earth…  / Than are dreamt of in your philosophy.”

Read the rest of the series, “Buddhism’s Next 40 Years: A Time of Reformation.”