When David Butow set out to photograph Buddhist culture, he learned that Buddhism isn’t just captured in the subject of a photo, but in the act of taking it. 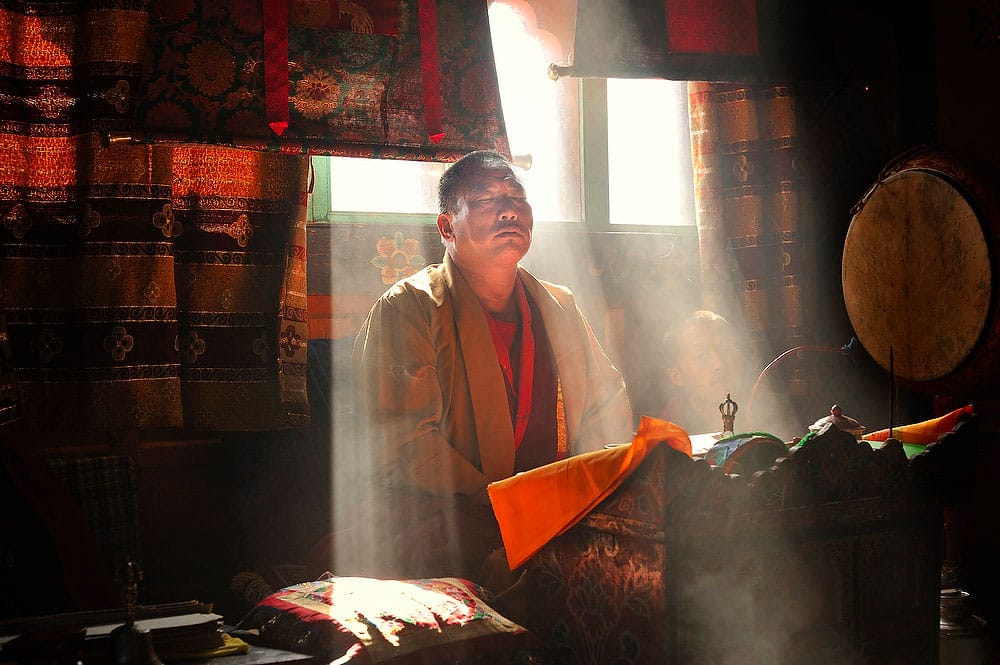 Monk praying during a ceremony in Paro, Bhutan. By David Butow.

In 2012, David Butow ventured to find the parallels between his work as a photojournalist and one of his most enchanting inspirations: Buddhism. One year and ten countries later, Butow produced a stunning series called “Seeing Buddha.” Says Butow about the project,

Most spiritual literature is filled with the words “see” or “vision” to describe the transcendent experience. I became intrigued by parallels of my work with those seeking spiritual awareness in practice and visual design. By making spiritual transcendence the very subject of a project, could the photographs “see” beyond the superficial?

Many of the photos in the series embody Buddhism not just in their subject matter, but in their technique. As a photographer, Butow cultivated awareness, compassion and discipline, resulting in a series that deeply expresses Buddhist experience. Butow’s photos have been featured in the New York Times and National Geographic.

In this Q&A, Butow explains how he found Buddhism as a subject, and how he used it as an inspiration.

In this series, what were you trying to capture?

I wanted to go to the places where Buddhism started or is the dominant religion and try to capture the variety of ways it’s practiced, and also show how Buddhist concepts are reflected in the visual aesthetics of those cultures. Also, from a more conceptual standpoint I was trying to make a link between the process of photography and my own interpretation of Buddhist ideas and the experience of the subjects in the photographs.

Why did you choose to explore Buddhism with your photography?

I thought it would be interesting to acknowledge and explore the idea of the transcendent experience while shooting and make Buddhism itself – the practice and aesthetics – the subjects of the pictures. Also, for me part of the attraction of being a photographer is that it gives me an excuse to explore places that I’m curious about. I was very curious about what Buddhism looks like today in the places like Bodhgaya and Sri Lanka where it was practiced over 2000 years ago.

You write about capturing a photo “in the decisive moment,” with a “heightened level of awareness.” Can you show me some photos that you think you’ve captured in that moment? What was it about that moment that put you in that mindset?

This picture was taken on New Year’s day at Golden Rock in Burma. The picture shows a scene of people praying inside a small building with the pagoda of the temple reflected in the window in front of them. So the viewer is seeing the people, and what they are seeing. 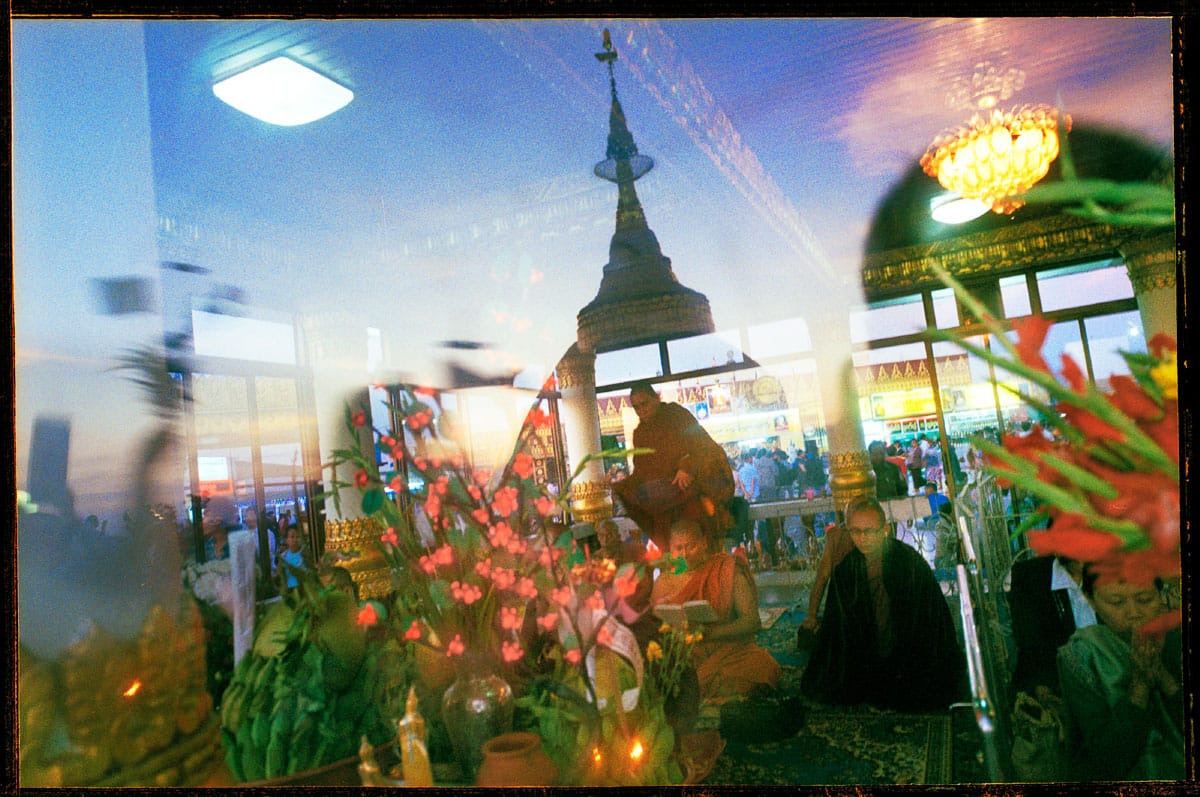 The fact that it’s the start of the year also appeals to me because at those times we are all reflecting on the events of the past year and trying to imagine what the next year will bring. You’re very aware of the present moment, and that that moment contains both the past and the future. The haziness and reflection seems to me to acknowledge this transient experience of being present physically, but also seeking another experience that brings us outside ourselves.

Can you explain how you were influenced by Henri Cartier-Bresson and “Zen in the Art of Archery?”

Cartier-Bresson has been my photographic hero since I was a teenager. His combination of sense of geometry, timing and sensibility of the human condition were, for his time, unparalleled. “Zen and the Art of Archery” appealed to him because it describes the moment of shooting an arrow, and by proxy shooting a picture, to be almost an unconscious act when done well.

It’s not random though, in Kyudo, there is tremendous discipline and preparation involved that requires the practitioner to be in an almost meditative state. The timing of the release of the arrow is not based on focusing on one thing, it’s really the combination of a lot of things going on with the archer, but those things have to be channeling through the archer in such a way that he or she is not conscious of them. People spend years, decades trying to get to the point where this happens.

Framing and taking a great picture has to be similar. Cartier-Bresson talked about it as “putting one’s eye, mind and heart into alignment.” The idea that everything is transient is central to Buddhism and still photography makes that point very well.

Was there a particular strategy, camera or technique that you found really captured what you were seeking?

Because I went to so many places, and there was such a variety in the ways people practice I thought the photographic techniques should be equally varied. I tried to pick ones that represented what I thought of that place. For example the way people in Burma practice their faith, with mythical creatures and such, it is a bit more, can I say “out of this world,” so the technique is blurry and impressionistic. Contrast that with Zen for example, reflected in the design of Zen gardens, which are very precise and organized and have a lot of negative space. For those pictures I used a technique that emphasized sharpness and precision and not necessarily a lot of colors. 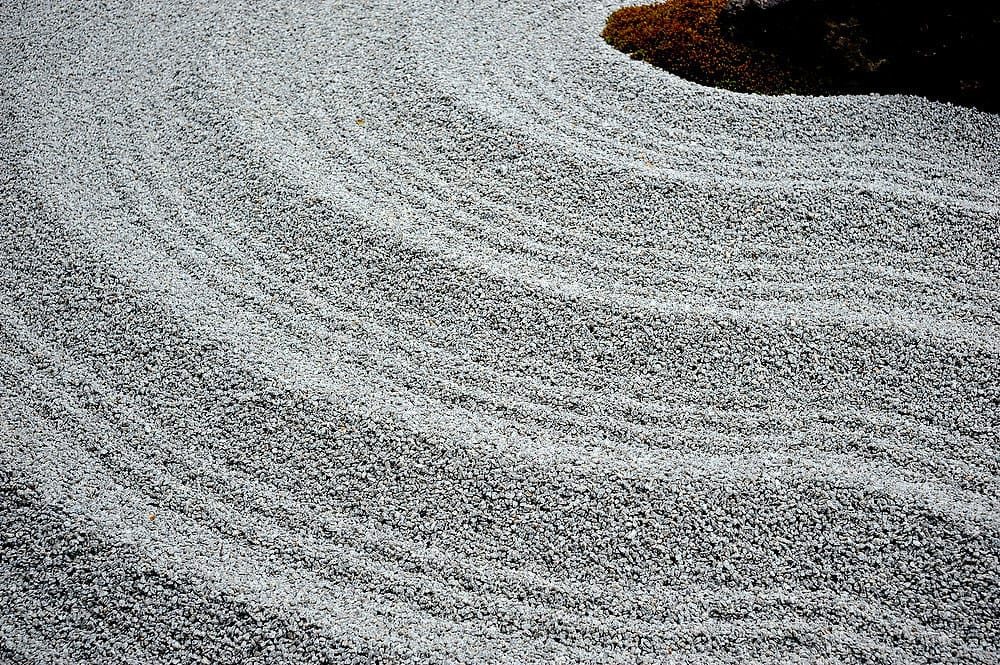 Also, I chose to work using a variety of cameras, films and techniques because it forced me to see in different ways, opening up a mind further than the ways I’ve been working in the last few years, which is basically digital in color or black and white.

It seems like you have been inspired by Buddhist thought and cultures throughout your career. Has Buddhism appeared in your photography, or inspired your perspective, in other series or assignments? If so, how (and could you point me to relevant photos)?

I was not thinking consciously about the merging of Buddhism and my photography until 3-4 years ago but before that I was attracted to some Eastern philosophies and I think that made working in Asia more attractive. There is sense of spirituality in a lot of Eastern thought that does not necessarily require a belief in deities so I wanted to explore that and see if I could absorb some of those ideas by being there.

You’ve covered the 2011 Japanese Tsunami, the 2008 Sichuan earthquake, Afghanistan, Ferguson, and many other events of hardship and tragedy. Did Buddhism inspire your technique or appear in the photos you took?

Recognizing human suffering, having compassion and feeling connected to other people with openness and non-judgment are not exclusive to Buddhist teachings, but they are certainly central. In order for me to do good work in those situations, I have to employ a lot of empathy and then mix that with a sense of design and timing, which links back to Cartier-Bresson and the archery book. Tying this process to Buddhist ideas is not the only way to think about it, but it’s one way. 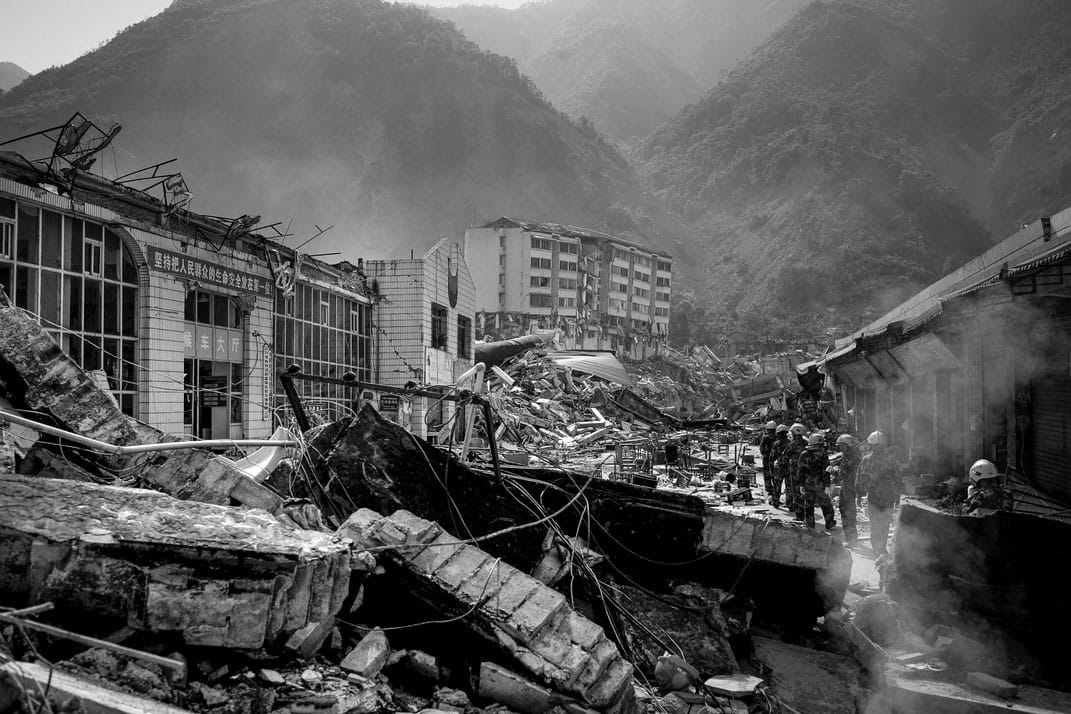 Could you offer a tip to aspiring photographers who might want to capture images of Buddhism, or use archery-like awareness in their technique?

When people do archery well, they have to be very comfortable with the technique and equipment. It’s the same for photography. If you’re thinking too much about the camera or how to use it you’re going to lose concentration of what’s going on in your mind, and what’s happening with the subject of the picture. It’s best to simplify this as much as possible which might mean not carrying too many cameras and lenses and being comfortable using what you have, which requires practice. Once you’re at that point, you want to be as aware of and in tune with your subject as possible. Like Cartier-Bresson said, use your mind, your heart, and engage with the subject whether it’s a mountain, a garden or a person. Be aware of changing light and of movement. Compose and time your shot when things are reflecting what you feel and think about the subject.

To see more of David Butow’s photography and order prints, visit his websites DavidButow.com and SeeingBuddha.net.