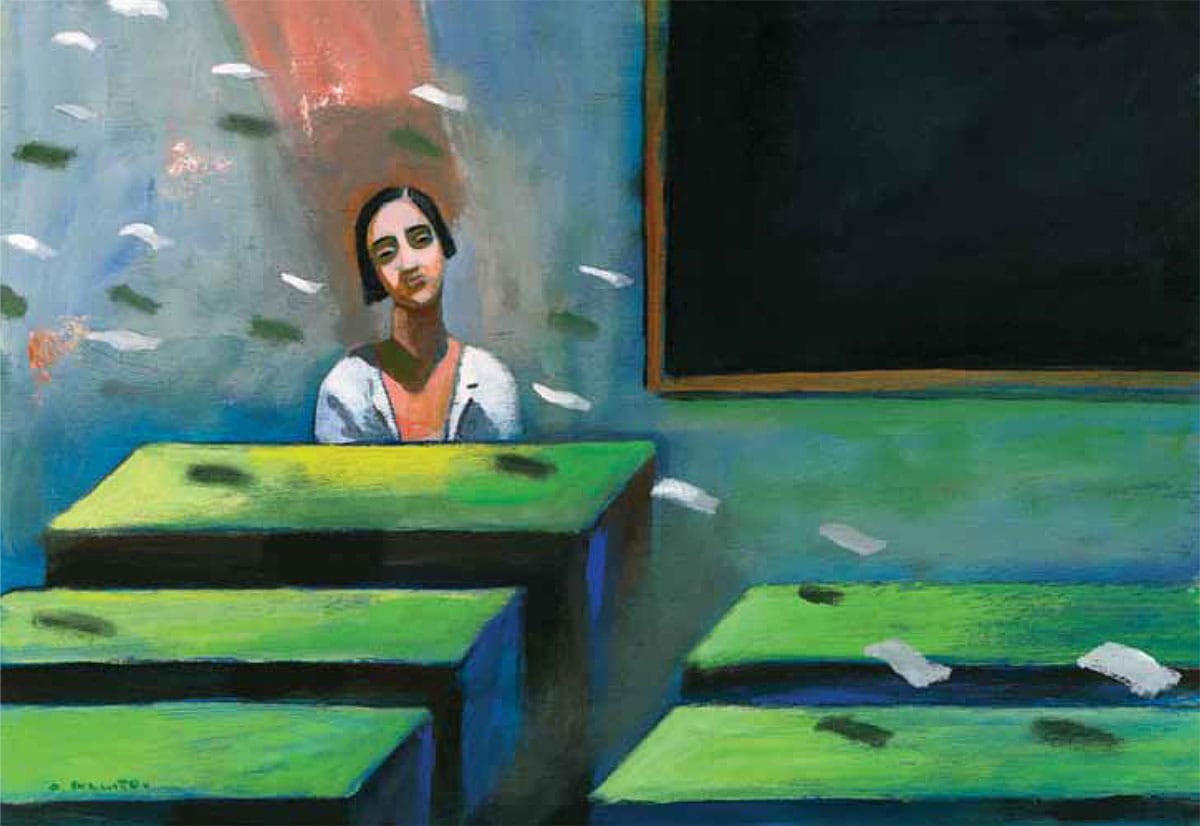 Whether they get an F or an A+, most kids can’t separate their grades from their self-worth. Kyo Maclear on eliminating grades so children can focus on what really matters in life.

Sometimes, when I’m procrastinating, I’ll create these ideal scenarios. I might imagine my dream garden or the model workspace or the ultimate writer’s retreat. These fantasy creations share the quality of Le Corbusier’s ideal cities, in that they are usually perfect yet unbuildable. Not that this elusiveness detracts from their appeal. Quite the opposite. (“Desire is full of endless distances,” writes poet Robert Hass.) Recently I’ve found myself daydreaming about my children and the ideal public school.

Given how much of their waking life our children spend at school, shouldn’t it be an impossibly magical and wonderful place? You might have your own ideas about what would make a school great (more green space, sustainable architecture, free nutritious lunch programs), and I would readily agree, but to my mind a crucial aspect would be this: a redefinition of merit.

Where I live, the public schools assign letter grades at the end of each term. By grade one most kids are being ranked and filed into categories of lesser or greater achievement, sorted, as education writer Alfie Kohn has described, “like so many potatoes.” These detailed report cards, the ministry of education contends, are necessary for “growing success.” After all, don’t grades motivate students to work harder and hence learn more?

I appreciate that for some people this fixation on goals and evaluation may seem benign or even desirable, but not in my family’s experience. I have never witnessed anything more distorting of my children’s learning and self-esteem.

Let me give you an example. In grade one, my eldest son was assessed with a mild speech impairment. He was assigned a language pathologist to help him with articulation. Giving him an “N,” the lowest possible mark on oral communication (as his teacher did that term), seemed a bit redundant. Why not just assign a grade for unluckiness?

My son was understandably dismayed when he looked at his first report card, surveying its columns of C and D grades. “I thought I did well,” he said. To which I replied, with beams of unconditional love, “You did do well!” He gave me a skeptical look. I might as well have exclaimed: “You’re nothing special!” The entire time, I kept wondering: how does a six-year-old get a “D” in drama?

Hoping to gain some insight, I went to speak to his school principal. It turned out she didn’t like report cards either, and worried about what they did to a child’s self-esteem. But she spelled out a conundrum: in order to qualify for special speech therapy, my son needed to score low. There needed to be a record of poor performance. “These days it’s all about data,” she said. “Data, data, data. It’s all-pervasive.”

And so it began to pervade our home. In the weeks and months after that first report card, I watched my son enter his own data trance, suddenly fixating on grades and praise. He insisted that my husband give him a thumbs-up whenever he accomplished a task, however minor. He graded us, too. One day his father received an “A” for hugging but only a “C+” for taking care of his stuffed elephant (because Ella landed on the floor). A week later I received a “100 percent” for dinner. Apparently I make a very excellent taco! His younger brother received a “B” for “hitting the dirt” (he looked like a lopsided starfish) and an “A” for “standing at attention.” (Have I mentioned the military drills in gym class yet? At this point, a regular gym class activity was “Battleships, Tanks, and Bombers.”)

We were even graded on quietness. My son would stand by his chalkboard and announce that it was time for a “quiet contest.” When his younger brother called out from the bath he received a punitive tick. Suddenly everything was susceptible to evaluation. Strawberries outranked blueberries on the “Best Berry” hierarchy. Dr. Seuss beat Shel Silverstein 5-1.

As the grading game continued, I tried to explain to my demoralized youngest son that it was probably a good idea not to take it too personally. After all, wasn’t a “Q+” on your pronunciation of “father” better than an “R”? Then one morning it dawned on me that by taking a bad situation and inflating it, he was actually allowing us to see it better. The perversion of the norm was allowing us to view the norm in all its surreal glory.

Kyo Maclear is a visual arts writer and author of two novels, Stray Love and The Letter Opener. She lives in Toronto.