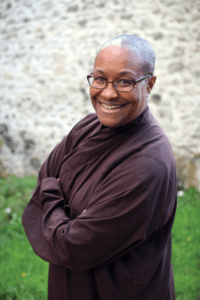 Most Buddhists today are lay practitioners with jobs and families, but a few still pursue enlightenment the old-fashioned way. In the July 2016 issue of Lion’s Roar, Koun Franz asked four people why they gave it all up to practice the dharma full-time. Sister Peace, a nun in Thich Nhat Hanh’s Order of Interbeing, shares the details of her monastic life.

The history of Buddhism, by and large, is a story of full-time practitioners. It stars the monastics, priests, yogis, and hermits who left behind what most of us call “ordinary” life to dedicate themselves solely to Buddhist practice and study. Laypeople, meanwhile, are nearly invisible in the traditional Buddhist narrative. A few entered the lore—Vimalakirti, Layman Pang, and the Tibetan farmer Marpa are perhaps the best known—but they are rare, celebrated explicitly as exceptions to the rule.

Today in the West, the story is reversed. The vast majority of Western practitioners—and most well-known Buddhist teachers—are lay men and women, trying to keep a commitment to practice while simultaneously devoting themselves to family, work, and participation in the culture. Monastics and other full-time Buddhist practitioners are the exception in the West, trying to make their way in a society that doesn’t necessarily support—or even understand—their path.
Monasteries in China and Tibet used to house up to ten thousand monks and nuns at a time. Those days are behind us. Yet every age, including ours, has its renunciates. They are the ones who give up what the rest of us won’t or can’t in order to place spiritual practice at the center of their lives. They remind us of the hard choice between “having it all” and having what you most deeply want. They show us that when you know what you really want, following your true path is easier than it looks.

A nun in Thich Nhat Hanh’s Order of Interbeing, Sister Peace has followed this schedule at Plum Village, in France, since 2006. According to her vows, she will most likely be there, or in one of the order’s other communities, for the rest of her life.

Sister Peace did not arrive at Buddhist practice by a straight path. Born in Washington, D.C., and educated in Catholic schools, she graduated from Georgetown University and built up a successful nail salon business. Deeply involved in the local political scene, she joined Anthony Willams’ campaign for mayor of Washington, and a year later she was working in his administration.

But four years of government work, even with all the human connections and rewards of community service, revealed to her that something was missing. “I really wanted to serve the city and the mayor,” she remembers, “but I had to work around the clock, you know?” She started to feel, as she puts it, “spiritually bereft.” 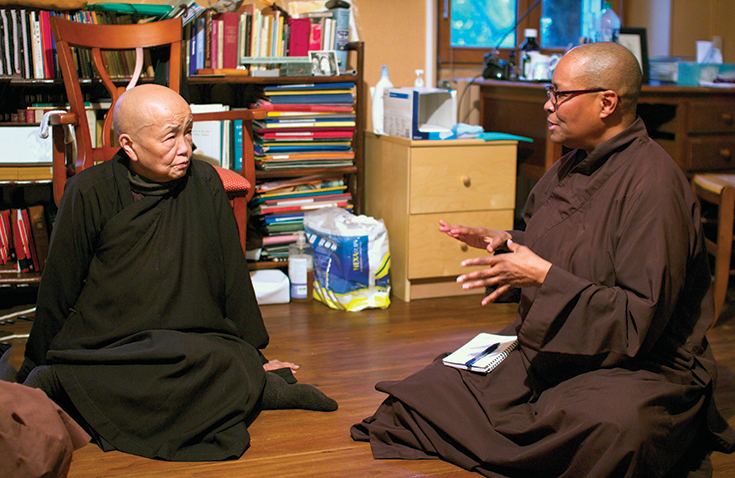 An online search led her to the Washington Mindfulness Community, and she met Thich Nhat Hanh soon after, when she assisted with a meditation retreat he led for the U.S. Congress. In 2005, she accompanied Thich Nhat Hanh on his first visit back to Vietnam since his exile in 1973. Her intense exposure to the monastic community during the trip raised questions about her own path.

“I saw how well many lay friends practiced and lived simple lives so they could do as I was doing, dedicating a lot of time in practice centers and retreats,” she says. But ordination and a life of service within the community had its own attraction: “Here was a rare and beautiful opportunity to become a monastic in the revolutionary tradition of Plum Village and engaged Buddhism. I knew this was a precious moment.” In 2006, she went to Plum Village to deepen her understanding of what a nun’s life entailed. Two years later, doubts behind her, she took monastic vows.

For monastics, the freedom to practice is balanced with limitations—monks and nuns are required to relinquish a great deal of personal agency and freedom. Beyond the rule of celibacy and an implicit commitment to serve the community, there are formal rules of behavior, called “fine manners,” that dictate when and how ordained practitioners move in the world. Nuns never go out alone, for example, even to go shopping—they’re always with at least one other nun.

For someone used to independence, the lack of solitude was a difficult change. “I had to practice getting used to not being in a room by myself,” says Sister Peace. Ordained members are also expected to exemplify the practice of mindfulness, taking care with their every action. When asked about her greatest challenge on entering Plum Village, she immediately replies, “I had to slow down my walking.”

Despite the limitations placed upon her, she says she hasn’t made sacrifices: “I would say that the things I’ve done without have become points of practice. Yes, there are things we give up, but it’s because we feel we’re getting back something so much greater.”

Celibacy, too, is a way of being “more available to everyone, not just a nuclear family. Not that one path is better than the other,” she adds quickly, “it’s just different. People’s choice to remain a layperson doesn’t mean that their practice cannot go deep. Each of us gets what we need out of the lifestyle we’ve chosen.”

Read the stories of three more Buddhist monastics in the July 2016 issue of Lion’s Roar.