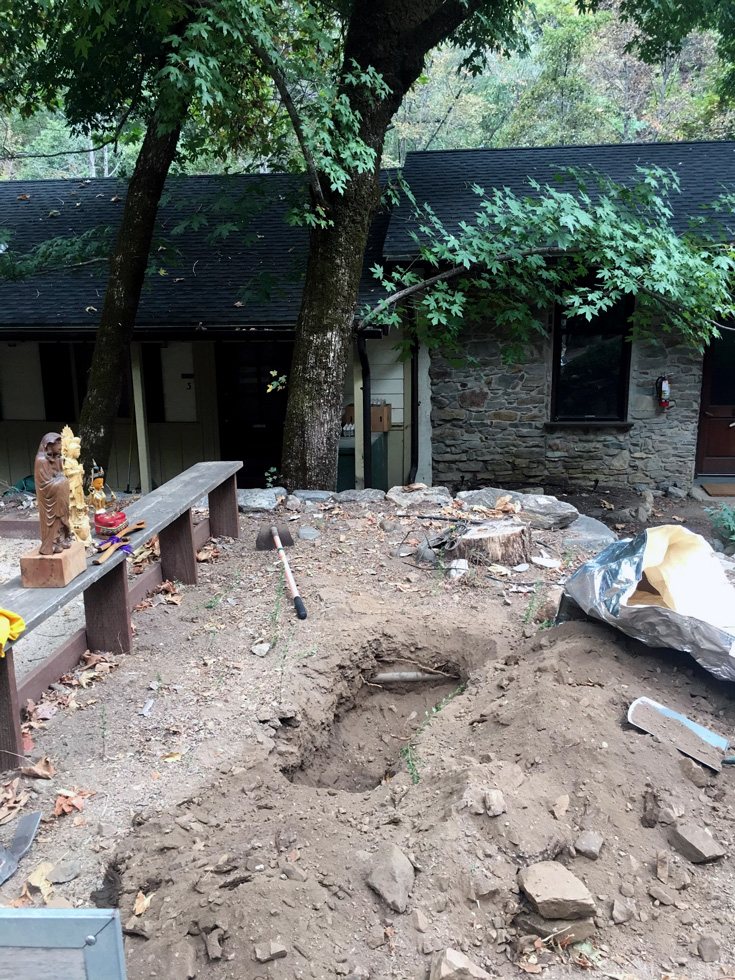 Statues of buddhas and bodhisattvas are being buried in the bocce court at Tassajara to protect them from fire. Photo by Kogen via San Francisco Zen Center on Facebook.

The Dolan fire — one of three active wildfires in California — is threatening to hit Tassajara Zen Mountain Center in Carmel Valley, California, the center reports.

On August 21, one day after an evacuation warning was issued for the county in which Tassajara is located, the fire was just 7.5 miles from Tassajara and “exhibiting extreme fire behavior.” At that time, there were 15 residents remaining at the center preparing for the possibility of encountering the fire, working hard to run the sprinkler system (nicknamed “Dharma Rain”) in order to keep the premises as damp as possible, as well as working to clear any potential fuel for the fire.

Tassajara is one of three practice communities that make up the San Francisco Zen Center (SFZC). As of August 24, Tassajara reports that they are continuing to brace for the potential of facing the raging Dolan wildfire that is sweeping through the region. While they are still far enough away from the current fires, Tassajara has not yet had a mandatory evacuation order, but may be facing one in the coming days. Currently, only 10% of the Dolan wildfire has been contained.

There are four remaining people at Tassajara: two professional firefighters and two residents with intimate knowledge of the center and the surrounding land. The four individuals are readying the premises in the event that the fire does hit Tassajara. “While acknowledging that things can change rapidly in these situations, today they feel optimistic and energized,” the most recent update reads. The center has been threatened by wildfires in the past, with five Zen monks famously standing their ground to protect the center from the 2008 Basin Complex fires.

The Incident Information System estimates that the Dolan wildfire will be under control by September 2nd, 2020. The statuses of the Tassajara and the Jamesburg Zen Center are being updated regularly on the San Francisco Zen Center website.

Annaka Gale is the Editorial Assistant for Lion's Roar magazine and a freelance culture writer.