Michael Stone on picking up skateboarding again at age 42—this time as a spiritual practice. 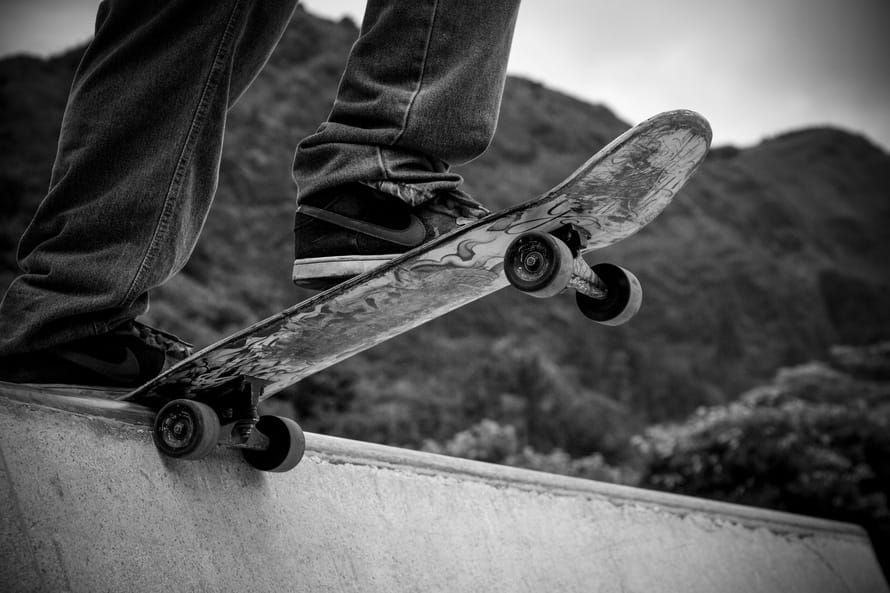 I stopped skateboarding when I was thirteen. Well, that’s not quite true; my parents forbade me to skate.

On Fridays after school, a very pretty older girl would come to visit her grandmother in the house next door. I positioned myself in front of that house, rehearsing my favorite skating tricks, waiting for her to make an appearance.

But just as she came out, I misjudged the delicate balance of my back foot on the deck and the board flew straight up into my mouth. Blood poured from my face and I ran dripping into my house, covered in it. My father drove me to the hospital, and I required a fair amount of stitches (painful!) and dental work (expensive!). No more skateboarding.

That was then. Now, twenty-nine years later, I’m skateboarding again.

After first teaching my three-year-old how to balance on a board, I’ve begun visiting the VicWest skatepark, an intimidating series of increasingly steep concrete bowls and ramps populated by twentysomething pot-smoking athletes. I live on an island in British Columbia, so visiting the park means ferries, a full day in Victoria, and a serious commitment. But I’m in.

In my mind’s eye I see myself dropping down into the ramp, falling in midair for a split second, and then feeling the rubber wheels land and successfully carry me into the ramp’s curve.

Every night this week I’ve had dreams of skating, and I wake up rehearsing foot and leg movements. In the yoga and Buddhist traditions, the psycho-physical framework for memory is called samskara. Sam means “with” or “together,” and “kara” means “make,” “habit,” or “effect.” Some scholars suggest this is where we get the English word “scar.”

In any case, it represents a coming together of patterns. Samskaras are like body memories, laid down in the muscles, connective tissue, and bones we use to move us around. So as I sleep, my body “rehearses” the weightlessness of dropping into a bowl or the electric achievement of landing a jump. It’s entirely somatic.

In my imagination and body, I’ve got banks of skateboard memories—film loops I replay again and again. On my third day at the skatepark, I stood at the top of a six-foot vertical drop that smooths out into a long ramp. I was terrified at the prospect of “dropping in,” but in my mind’s eye I see myself dropping down into the ramp, falling in midair for a split second, and then feeling the rubber wheels land and successfully carry me into the ramp’s curve. I see myself doing this at twelve years old. (At least I think I can.)

Skating in the present, I’m confronting these memories of the past. But I’m not traveling as fast as I do in my daydreams, and there’s a resistance to dropping into the bowl that’s all new. I’m forty-two years old. My nervous system has a tether on my imagination. And my legs don’t have the energy they once had, at least not for quick movements perched on the rim of what feels like a twenty-five-foot-deep bowl. (It’s actually about seven feet deep.)

Still, I find the shapes of VicWest and try to ride them as far as I can. The back wheels dovetail with the swollen cement curve; the steel trucks grind the edges of a ramp; the bearings make their head-turning sound. There are a thousand moving parts and details one can pay attention to at any moment—and it’s all happening quicker than I can think.

Maybe that’s the allure of skating now. I’m scared and the risks are higher. But the thrill today is found in the immediacy of the present moment, not in landing a trick or having a cute girl across the way feign interest.

So I take my time. I may have doubts and worries, but I haven’t ripped skin yet and there are no bruises so far.

In skating, the process is less about stillness and watching the world happen and more to do with the immediacy of dance, responding to micro-movements, testing ideas against concrete and the limits of the body, and then learning from what clicked.

Skating on a Friday afternoon, there’s hardly anyone in the park yet. I’m sweating, happy, and immersed in a non-static and kinetic present. Meditation practice, as I understand it, is about opening space for the breath to become fine, thoughts and compulsions to settle, and the body to maintain wakefulness during any mental state. In skating, the process is less about stillness and watching the world happen and more to do with the immediacy of dance, responding to micro-movements, testing ideas against concrete and the limits of the body, and then learning from what clicked.

Unlike in meditation or yoga practice, there’s no teacher. Everyone learns from studying the knees, ankles, hands, and feet of the others, and this nonhierarchical learning environment becomes a pop-up sangha in which we ferret out what we can and then get back on our boards and try again.

I wonder: did I start skating to battle the domestic duties of having a third child, to relive something in the past? I don’t think so. Skating feels more to me like rereading a sutra, listening to an important record again, or rolling out a yoga mat to practice sun salutations once more. Exploring the ways our bodies move, having conversations with ourselves about limits, and the rewiring that happens through kinetic and somatic experimentation all constellate into a more alive sense of self. Skating at forty-two is rekindling that love.

As I leave the skatepark after an hour, the smaller ramps are populating with young kids and their backpacks and phones. I walk out of my way to overhear their conversations about how they enter the large bowl, hoping to pick up a pointer. They’re too engrossed in debating the pros and cons of entering from the left or right to notice me.

I walk back to my car and everything looks bright: the grass, the metallic blue of the car hood, the tiny stones in the cement. I’ll drive back to the ferry terminal, head home, and as I lay in bed, I imagine I’ll replay the day in my calves and arms, then let the whole thing slip away.

Shôken Michael Stone was an author, activist, father, and teacher who sought to illuminate the teachings and practices of Vipassana meditation, yoga, and Mahayana Buddhism for the postmillennial age. A Fellow in Residence at the University of British Columbia, he was the author of several books including The Inner Tradition of Yoga and Awake in the World. He passed away on July 16, 2017 at the age of 42.