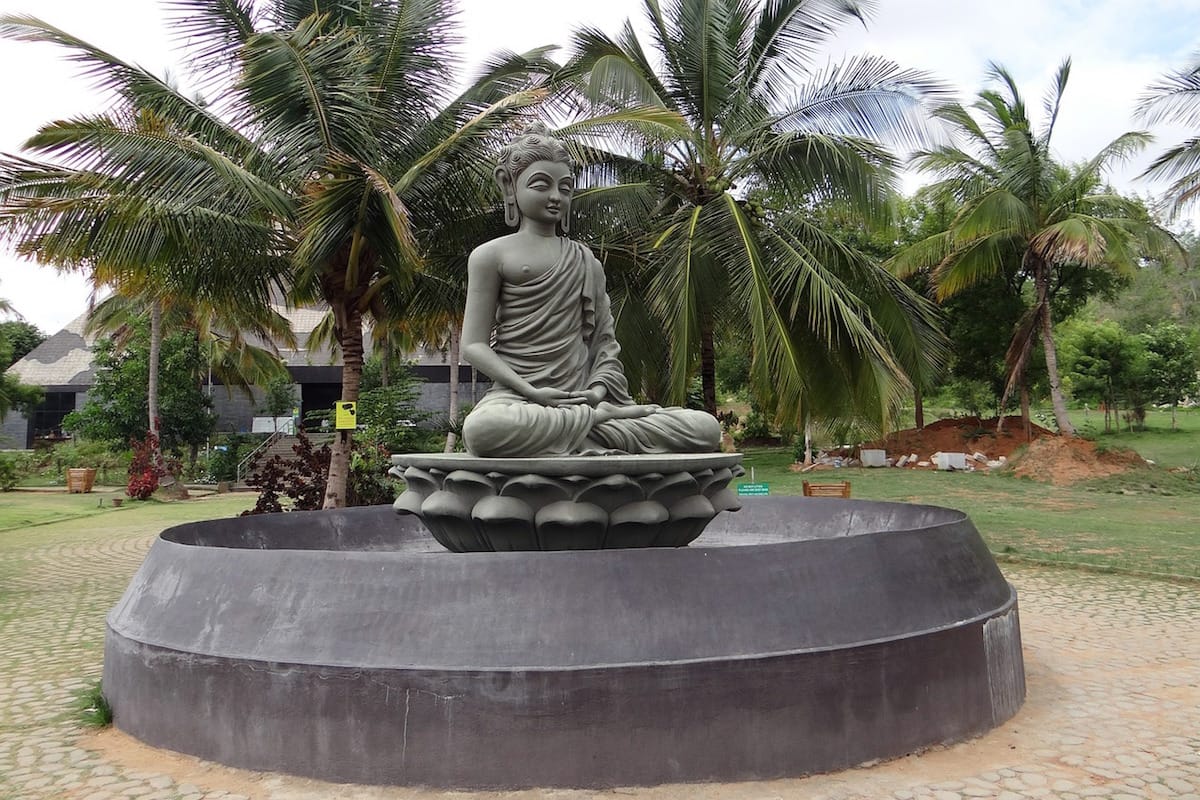 “When we decide not to blame,” says Sakyong Mipham Rinpoche, “the world opens up. We begin to appreciate the peculiarities of life. We become more imaginative and able to discover creative ways of moving forward.”

Recently I was stuck in a security line at the airport. Everybody was upset because our luggage was being x-rayed so slowly. People were becoming more and more agitated, blaming the security personnel for making us late. But the men and women on staff were just trying to do their jobs, and, ultimately, we didn’t solve any problems by blaming them for the current hassles of travel. I realized that we could just as easily be blaming the terrorists, who are themselves blaming Western imperialism—and the cycle rolls on.

It seems like the world is becoming too small a place for all of us to be wielding blame. Where can it all go? When we’re disappointed or frustrated, when we’re in pain or when our day’s not going well, our tendency is to search for an object of blame. Our mantra becomes, “If only something were different, I wouldn’t be having this problem.”

Blame is tricky. By trying to find someone else who’s at fault, we’re failing to deal with our own mind. Instead of looking inward, or taking a big view and seeing the transparency of the whole situation, we vent. “If only the driver in front of me had been going faster, I wouldn’t be late for work.” “If only someone else had cleaned the kitchen, I would be watching my favorite TV show instead of mopping this floor.” Even if we find someone we can logically blame for our pain, conducting our life in this way does not provide genuine relief. Blaming just lays the ground for further suffering and discontent.

From a meditator’s point of view, as long as we’re looking for someone to blame, our mind is unable to settle. By putting ourselves into a mind space where we’re constantly projecting out into the world—trying to find someone or something who could be responsible for our unhappy state—we abandon the possibility of harmony. Blame is a form of aggression. Looking outward for an object to which we can attach our negativity and irritation hinders our ability to have peace. The meditation path encourages us to be bigger, more openminded, more mature. It’s suggesting that we take responsibility for our behavior. This means that one day we will simply have to stop blaming the world.

On the path of meditation, we acknowledge the activity of our mind in a very pragmatic way. This is an opportunity to observe the activity of blame. Rather than radiate negativity, we can see that the real source of our discontent is our unwillingness to work with our mind. As long as we’re looking for a place to attach our discontent and aggression, we’re ignoring the possibility of uprooting it through wisdom. We could be using our mind to understand that aggression itself is empty, conditioned and silly. If we develop the self-awareness to realize this, we’ ll no longer be so susceptible to the habit of blame.  This doesn’t mean becoming masochistic and blaming ourselves, but realizing that pain and suffering—no matter what kind of day we’re having—is a very basic reality. We can realize that we’re having a difficult time; we’re in pain. That opens our heart and our mind to the reality that no matter who we find to blame, that individual also is in pain.

The Buddha outlined four basic truths. The first truth is the truth of suffering. We might be under the illusion that some people experience suffering and others don’t. But by “truth” we mean relevant for everyone—not true for some and not others, or true on some days and not the rest. We live in a world where suffering is the constant. If we find pain in our life, we shouldn’t be shocked. We shouldn’t take it as a personal insult. Everybody has bad days, everybody has difficulties, and blaming somebody else is not going to change that truth. Blaming is a way of running from that truth. We haven’t failed as human beings if we suffer. Suffering in fact lays the ground for understanding ourselves and understanding others.

Blame is an obstacle on the path of openmindedness and understanding. By blaming others when the world doesn’t move the way we want, we’re creating narrow parameters into which everything must fit. We become dead-set on what will solve our problem; nothing else will do. Blame ties us to the past and reduces who we are. Our possibilities become confined to one small situation. What is that path of blame going to accomplish?

In this time when it’s so easy to blame other countries, other cultures, other ways of thinking, blame will only exacerbate any situation. Even when we experience an acutely painful event and feel completely justified in pointing the finger at a particular person or group, we’re choosing to make ourselves smaller. We’re confirming a habitual pattern and hindering our ability to grow as human beings.

The maturity we develop through meditation gives us the base by which we can try to understand others instead of blaming them. I remember my father and other members of the older generation of Tibetan lamas saying that they didn’t blame the Communist Chinese for the destruction of Tibet. They felt that blaming the Chinese wouldn’t solve anything. It would only trap the Tibetans in the past. As the Dalai Lama has said, the Chinese invasion became a teacher, a powerful challenge for increasing compassion, an opportunity to understand that when people do something that hurts others, they themselves are bound by fear and delusion. Rather than rehashing events in our mind and repeatedly pointing the arrow of blame at our chosen target, we too can consciously decide to turn our minds toward something bigger. Instead of investing in fixation, we can work on letting go.

This process takes discipline, and it leads to joy. When we see our tendency to blame and decide not to do it, the world opens up. We have so much more space in our mind to maneuver. Before we were heading down a one-lane road—now we are in a large meadow. Without the restriction of blame, we’re able to feel our natural intelligence, our innate compassion. We tap into a deep well of understanding that can even fuel our sense of humor. We begin to appreciate the peculiarities of life. We become more imaginative, able to determine creative ways of moving forward.

Not following the path of blame takes confidence and courage. We’re going against the grain. Because we’re acting from a deeper sense of self-awareness, we’re not so predictable. Others might think we’re stupid or crazy; the person who is expecting us to blame him might even be taken aback. But we’re not stupid—in fact, we’re a little wiser. This mixture of wisdom and courage enables us to be more at peace with ourselves. We have stepped onto the path of compassion and virtue. Our eyes and ears, our mind and heart, have more room for understanding. In taking the path of no blame, we’re moving in the direction of a future that includes joy and freedom