Three-Michelin star restaurant owner, French chef, and Buddhist Eric Ripert was recently featured on colleague Anthony Bourdain’s show, Parts Unknown. The two traveled to Sichuan, China, where they learned the ins and outs of classic Sichuan cuisine, took a little more spice than Ripert could handle, and even visited the Leshan Giant Buddha, a 71-meter tall stone statue of Maitreya, from the Tang Dynasty. 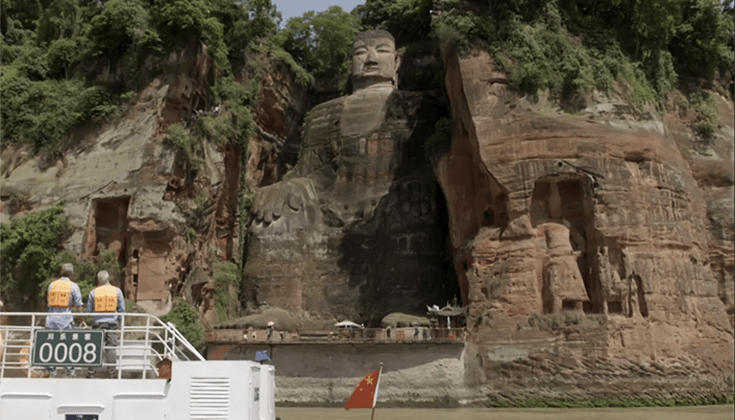 Bourdain recapped his time with Ripert for CNN, playfully jibing Ripert about the latter’s concerns regarding traveling in China as a Buddhist.

“My friend Eric Ripert (maybe you know him from such previous buddy films as Peru and Marseille—as well as the upcoming Bad Boys VII: The Revenge) has never been to mainland China.

And due, perhaps, to his adherence to the teachings of Tibetan Buddhism—and a friendship with Richard Gere—he had concerns about what kind of a welcome he’d receive. For the first few nights, he slept with a tin foil helmet around his head, convinced, every time his cell phone dropped a call that “they” were on to him.

I assured him repeatedly that he was the very last person any Chinese secret services would give a shit about, but he was unconvinced. Nonetheless, his paranoia was acute.”

More comically, Bourdain writes, Ripert’s taste palate, “coddled by years of foie gras, runny cheeses, flaky pastries and the subtle notes of many fine wines,” was quite unprepared for the level of spice in cuisine.

Back in 2010, Lion’s Roar talked with Ripert about the role Buddhism has played in his career. (You can read the full Q&A here) When asked, “How can we bring Buddhism to the kitchen?” Ripert answered:

In many ways—by promoting tolerance, by paying homage to every ingredient we use, vegetable or animal. I follow the teaching of the Middle Way when I am managing my team and it’s a challenge—especially under pressure. In the past, we managed the kitchen from a very dogmatic and borderline violent way, teaching through humiliation instead of positive reinforcement (actually an old tradition in my industry, especially in France). Today I promote kindness and respect. Cooking can be a very meditative process and I encourage the cooks to focus on the moment more than I did in the past.

Ripert was also featured recently as a guest on Dan Harris’s 10% Happier, where he discussed how his Buddhist practice has changed the way he operates in the kitchen.

Watch Bourdain and Ripert “get schooled” in Sichaun cuisine on Parts Unknown below: