“He moved me to my core,” said the playwright about the Peace Prize Laureate in this 2014 conversation with bell hooks. 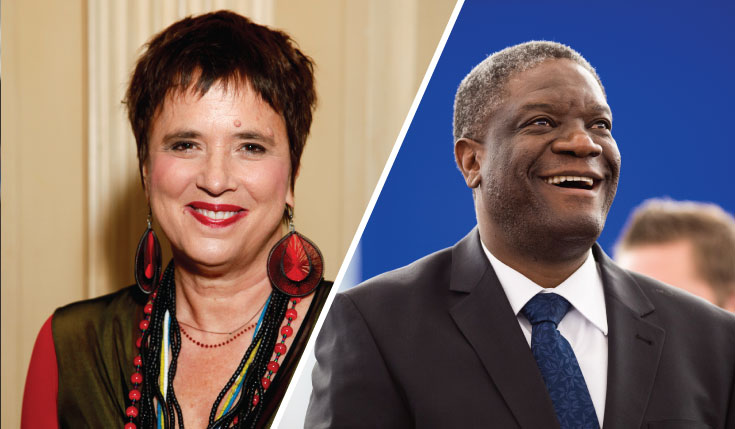 In 2014, Eve Ensler and bell hooks spent an evening discussing patriarchy, activism, and dance at The New School in New York. In that conversation, Ensler discussed her experience meeting Congolese doctor Dennis Mukwege, who — along with activist Nadia Murad — won the Nobel Peace Prize today. The two won the prize for their work to end the use of mass rape as a weapon of war.

Eve Ensler, creator of The Vagina Monologues, has worked with Mukwege to protect women in the Democratic Republic of Congo. Here’s what she said about that work in her conversation with bell hooks:

Eve Ensler: Seven years ago I interviewed an extraordinary man named Dr. Denis Mukwege, who was nominated for the Nobel Peace Prize this year. He is a surgeon and gynecologist who is devoting his life as a Congolese man and a doctor to healing women who were being eviscerated and raped and destroyed in war. Dr. Mukwege asked me, “Would you come and help, because we’re completely alone and we’re drowning? We’re drowning in the rapes; we’re drowning in the violence; we’re drowning.”

I went because he moved me to my core. I went because the injustice that has been wrought on black women’s bodies has always moved me to outrage. I spent weeks with women at Panzi Hospital who had been eviscerated by a war over a mineral that is used in our cell phones. I saw the hundreds and thousands of women’s bodies that were literally being destroyed because of greed.

I was shattered. Something changed in my life forever. The connections we’re talking about were so clear—this colonial, capitalist plundering of a country, and of women’s bodies simultaneously.

I met with many Congolese women and asked them, “How can we serve you? What do you want us to do?” I’ve been taught by activists throughout the world that our job as people of privilege is to go and listen and serve. I have a motto over my desk that says “Shut up and serve.” It’s not our right to dictate what people should do. It’s none of our business. Our job is to find resources so people can do what they do best.

The seven years we’ve worked in Congo have been radically transformative for me. I watched the women determine what they wanted, which became a community for survivors of violence called City of Joy. It is owned by them, run by them, directed by them.

The women who come there are all survivors of gender violence, so the first goal is to transform their enormous suffering. But then we train them to be leaders. This morning I was talking to the extraordinary director of City of Joy, Christine Schuler Deschryver. We just had our fourth class graduate, so that’s now a total of 300 women who have graduated. It’s a miracle that happened because these women had the resources to do what they do best. I think that’s what I’ve learned about service—to be present when you’re needed and disappear when you’re not.