Zen teacher and Unitarian Universalist minister James Ishmael Ford offers a commentary about how we got to Charlottesville and where we go from here. 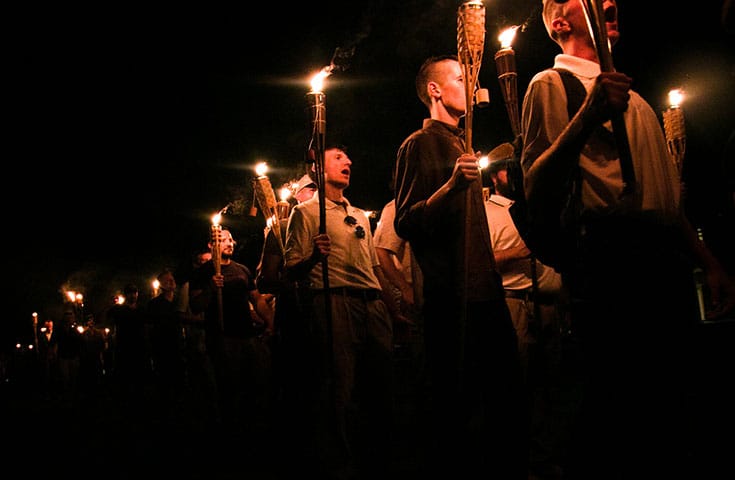 White supremacists march through the University of Virginia campus the night before the “Unite the Right” rally in Charlottesville, VA. Photo by Karla Ann Coté.

One of my favorite bloggers, Jim Wright of Stonekettle Station, notes four points about all this.

Let me take these in that order.

First: the whole demonstration as it took shape was a flat-out attempt at terrorism by a bunch of white supremacists. This was not a group of people exercising their right to free expression of support for Southern culture. These people were marching with torches — that they appeared to be Tiki torches from Pier One did add a bit of left-field humor to the scene. But those torches are meant to remind people of Ku Klux Klan and Nazi marches. These people brought guns, they brought clubs, they brought shields. There was no intention of this being any kind of peaceful demonstration. This was a provocation. There was ample reason for the governor to declare a state of emergency, which ultimately he did.

That car ramming into counter-demonstrators? That was simply the fulfillment of the scene they were setting up. Terrorize the people. Let ‘em know you’re serious. Let them know if you stand up to them, you will be plowed down. There are three dead (one killed by that act of terrorism, and two police officers killed when their helicopter crashed), and more than thirty hospitalized. Near as I can tell none of them were from among the fascist demonstrators.

What rises from ashes is usually just dust, and bones, and more ash. We have the capacity to do better.

Second: It is past time to stop pretending the Confederacy and its symbols stand for anything else. The symbols of the Confederacy are a stalking horse for this white supremacist movement. None of it has anything to do with authentic Southern culture, about family and work.

It is worth noting that the majority of monuments to the Confederacy were built either at the beginning of the twentieth century, coincidentally just after the Plessy v Ferguson decision and the rise of the legally sanctioned Jim Crow era, or in the heat of the modern Civil Rights movement, starting in the mid-1950s, and through the mid-60s. These were monuments to a culture of racism and white supremacy. And they stand today as acts of terror, intended to strike fear into the hearts of people of color and anyone else who stands against such evil.

Third: This is a fascist or, maybe more accurately, neo-fascist movement. The flags flying among those burning torches were Confederate battle flags and variations of Nazi and similar fascist symbols. The chants themselves were drawn from Nazi playbooks. There were straight-ahead anti-Semitic chants. And they were actually chanting “blood and soil.” To quote my friend Kat Liu, “Blood and Soil (Blut und Boden) refers to a racist ideology that focuses on ethnicity based on two factors, ‘descent blood’ and possession of territory by only those of descent blood.” You can infer what “descent blood” is. Point is, the so-called alt-right is a violent, racist, fascist movement made American.

Fourth: Mr Trump — the man addicted to his Twitter account — delayed responding to Charlottesville for most of the day. Finally, after making some generalized statements about hate, he gave his view: “We condemn in the strongest possible terms this egregious display of hatred, bigotry, and violence on many sides.” Let’s be clear. There were not many sides involved here. There were neo-fascists racists trying to terrorize the populace, and there were those standing in opposition. The dead person and the people in the hospital, near as I can tell, all are from those protesting the fascists.

I’m not saying those on the left are all angels. I have been chilled to the bone at several demonstrations I’ve attended over the years by people walking next to me who were simply looking to burn it all down. But, this was not what was going on in Charlottesville, that sliver of the left were not the problem. There was no gray area like Mr. Trump would have us believe.

There were fascists and there were those opposed to the fascists. Mr. Trump, who cut his political teeth hustling a racist birther conspiracy, was caught in the hard place between television cameras and, not to put too fine a point on it, his real base. Not the people who he’d conned into thinking he cared about them and their jobs in these hard times, but his real base, who hate that this country is becoming multicultural, that it’s becoming a place where women and men are equal, where it doesn’t matter who you love, where it does not matter what the color of your skin is.

I’d like to add a fifth point: There is good news. There really is.

I find myself thinking of the moral revival that is sweeping through the progressive spiritual community. This movement points to the evils all around us, but without turning from those that live in our individual hearts. And it calls us back to our better angels, giving us a moral compass that will allow us to act in ways that might actually be helpful, and that remind us that we are not alone.

Yes, these are dangerous, dangerous times. There’s a temptation to join those who would just burn it down, hoping that maybe something good might rise from the ashes. But what rises from ashes is usually just dust, and bones, and more ash. We have the capacity to do better.

We are born out of each other and this world. We live among all things as part, fully a part, with no extra part not of it. And when we fall, we fall together. Intimate.

Intimate. In fact, you could say that we’re family. Even the fascist, even the terrorist: family. Yes, they need to be opposed. They need to be stopped — and that means stopped. But, all along the way, they are also family. We’re all connected.

And so everything we do matters. But a couple of things are downright critical.

One is to not forget to practice. Me, I practice Zen. It is a discipline of embodied presence, a regular taking of time to sit down, shut up, and pay attention. It isn’t the only one to do that. But I suggest now more than ever that we all recall the disciplines of recollection and presence. If you have a practice for this, keep to it. If you don’t, find one.

There’s a powerful Japanese saying: insight without action is a dream. And action without insight is a nightmare. Clarity of mind and clarity of heart are essential if we’re to make our way through this world, where ends and means are one thing. What we need is something that calls on us to see big. For all of our sakes, find a way to see large.

Another important thing is to recall the suffering of the world. Do not forget. We’re all in this together: the immigrant, the person of color, the LGBTQ person, women, everyone who finds themselves as the target of the fascist rhetoric of hate. Recall the hurt and fear that led so many people to support Mr. Trump and walk with the fascists, but who are not in fact of them. Recall even those who are of them. Remember those who are afraid. Look big, find your compassion, your ability to suffer with others.

We have met the enemy, and he is us. We have met the friend, and he is us. That is the secret that will win the ultimate victory, if anything will. And this is our way. Looking inward, and reaching out a hand and acting. Heart with heart, and hand in hand, we will build a community of hope and possibility.