The Lady, which was released for awards consideration late last year, is now playing in limited release throughout the U.S. and Canada. At the time Danny Fisher saw the film at an advance screening, Burma was in the news as Hillary Clinton became the first U.S. Secretary of State to visit Burma in more than fifty years. Since then, the country, ruled by a military dictatorship for five decades, has shown even more signs of democratizing. Suu Kyi and her National League for Democracy won 43 out of 44 seats they contest in last month’s parliamentary elections, and she took her seat in parliament last week, after ending the NLD’s boycott of swearing an oath to the country’s military-drafted constitution.

Watch a trailer for The Lady above. Here now is Fisher’s advance-screening review.

History seems to be in the making in Burma as Luc Besson’s The Lady, about National League for Democracy leader and Nobel Peace Prize laureate Daw Aung San Suu Kyi, screens in New York and Los Angeles (where I saw it) this week for Academy Awards consideration. Hillary Clinton became the first U.S. Secretary of State to visit Burma in over fifty years last week, signaling that the recent “reforms” in the country, which has been ruled by a brutal, repressive military dictatorship since 1962, might be real. (Though violence against ethnic minorities flared very shortly after her departure, and many, many political prisoners remain in the country—including U Gambira, the leader of the 2007 Buddhist monastic uprising known as the “Saffron Revolution.”) The aspect of Secretary Clinton’s visit that received the most attention was, of course, her meeting with “Daw Suu,” who was released from her latest house arrest just over a year ago. (She has spent a total of 15 of the last 22 years under house arrest.) With the world focused again on “The Lady,” as she is known within Burma, the arrival of a major motion picture about her is timely to say the least. 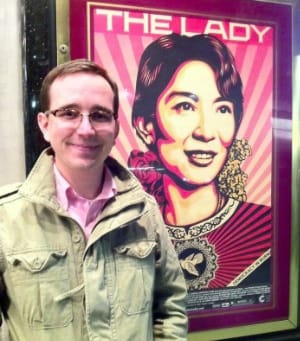 The Lady helps the viewer come to understand Daw Suu (played by Michelle Yeoh) and her nonviolent, Buddhist-influenced leadership by focusing squarely on her marriage to the late Oxford Tibetologist Michael Aris (David Thewlis). The daughter of the assassinated General Aung San, a revolutionary who was key to gaining Burma its independence from Britain, Daw Suu spends her days as wife and mother to Alex (Jonathan Woodhouse) and Kim (Jonathan Raggett), and her nights finishing her own Ph.D. and writing and reflecting on her father and her country. Looming over their quiet life is the possibility that someday Daw Suu, given her family history, may play a role in the shaping of her country. That possibility becomes a reality when her mother Daw Khin Kyi (Marian Yu) falls ill. Daw Suu rushes to her bedside just as the 8.8.88 uprising – the massive, student-led demonstrations against the military government that ultimately resulted in a violent crackdown, claiming the lives of over 3,000 protestors – occurs in Rangoon. Daw Suu is subsequently approached by students and intellectuals in the movement: they know that they need an imposing face (and prime minister candidate) for their National League for Democracy, and believe that it can only be her. She accepts and goes on to be elected in a landslide, only to have the junta nullify the results, threaten her life, place her under house arrest, cut her off from the family, and undermine her work. All the while, Daw Suu insists on nonviolent response, leading through powerful, inspirational example.

Meanwhile, the film also tracks Michael and the boys back in the U.K., frequently kept from wife/mother, and their efforts to adjust to their new reality and serve the cause as best they can. Michael recruits help to nominate his wife for the Nobel Peace Prize (which she receives in 1991), negotiates personally with the generals, and coordinates with such figures as Archbishop Desmond Tutu and U.S. Treasury Secretary James Baker to apply pressure where it is needed.

The film takes an absolutely devastating turn (just as the real story did) when Michael is diagnosed with pancreatic cancer, which the generals attempt to leverage against Daw Suu. Despite entreaties from and considerable efforts by Pope John Paul II, the UN, the Dalai Lama, and others, the two are forbidden from being together as Michael dies; the generals won’t allow Michael into the country, and if Daw Suu leaves she will not be permitted to return. Here, the vision, idealism, and considerable sacrifices of this family on behalf of a nation of oppressed people, is brought into starkest focus.

Yeoh, the Malaysian-born star of Ang Lee’s Oscar-winning Crouching Tiger, Hidden Dragon and the James Bond film Tomorrow Never Dies among many others, is nothing short of miraculous. Not only does she completely transform into the Daw Suu we all recognize – it would not be an overstatement at all to say that it’s as though she’s channeling her – but she also manages to convincingly bring out those aspects of her inner and interpersonal life that have not been so public. It’s a robust, heartrending, simply astonishing performance that not only does justice to the film’s subject, but will probably also stir many viewers to go out and learn more about the real-life “Lady.” (There couldn’t be a higher compliment for Yeoh, who, personally inspired by Daw Suu, was the driving force behind getting this film made.)

Though Yeoh’s performance alone would be enough to make it a must, The Lady contains a second remarkable piece of film acting in David Thewlis’ take on Daw Suu’s late husband. Best known to American audiences as Harry Potter’s “Professor Lupin,” Thewlis comes through with what is perhaps the most affecting performance in his distinguished career as the devoted Michael Aris (and also his twin brother Anthony). In the final analysis, The Lady is less about an individual than it is a marriage – the title may be a bit of misnomer, in fact – so he’s every bit as important to this story as she is. Thewlis exquisitely conveys the intelligence, patience, longing, adoration, and dedication of his character. He breaks your heart.

As director, Besson (La Femme Nikita, The Fifth Element) is predictably right at home with the more suspenseful aspects of the story and in depicting the horrors of vicious Generals Ne Win and Than Shwe’s junta. Additionally, as he demonstrated with Léon: The Professional (his best film), his storytelling panache is often very well suited to emotionally-charged material: as unusual as the pairing of material and director may seem here, his unique visual sense often serves The Lady quite well indeed. One breathtaking, richly metaphoric moment, for example, has Daw Suu lighting a candle on the floor beside her mother’s bed in Rangoon General Hospital, at once bringing a much-needed quality of warmth and personality to the seemingly hopeless surroundings, and sending hoards of cockroaches fleeing underground. In addition, the re-enactment of the real-life moment when Daw Suu faced down a potential firing squad is at once pitch-perfect and a quintessentially Besson moment. (It was this incident that also inspired the iconic U2 anthem to Daw Suu, “Walk On”.)

Though Rebecca Frayn‘s script wisely keeps the drama focused on Daw Suu’s sacrifices in terms of her family, it’s flat, without much in the way of compelling dialogue (mostly it’s used to telegraph information). In addition, the film contains just enough flashes of genuine greatness to leave the audience wanting more. One beautifully performed scene, for example, which depicts the frustrated Kim and the distraught Daw Suu speaking by phone as Michael dies in hospice, brilliantly captures the tension between agape love and family love that is at the very heart of this story. Daw Suu awkwardly and unnecessarily tries to explain to her son (and herself) the reasons that she’s not there with them, as Kim listens in adolescent silence, clearly struggling with the impending loss of his father, the absence of his mother, and the hopeful vision of a democratic Burma that the whole family shares. It’s a powerful moment of conflicting, messy emotions, one of a handful in the film, which suggest the possibility of a much greater work of art. These scenes represent The Lady at its best; in between, though, this is not necessarily 2011’s most scintillating piece of cinema.

But it all works nonetheless. (At the screening I attended, the soft sounds of sobs and sniffles in the theater permeated all of the scenes intended to elicit such a reaction.) What’s more, The Lady isn’t trying to be Citizen Kane. Indeed, it’s after the final scene fades out that the real mission here is perhaps most apparent. The first end title card notes that over 2,100 political prisoners remain behind bars in Burma, including 17 video journalists – several of whom contributed footage from within Rangoon specifically for use in the film. In addition, the credits have a “thank you” to certain persons within Burma for assistance with the film, noting that, for their safety, they cannot be identified by name. The Lady is first and foremost a passion project by film artists wanting to educate audiences about the still-dire human rights situation in Burma, and the truly extraordinary sacrifices of those trying to change things. It’s “edu-tainment,” activist art, and, clearly, everyone involved in the production is OK with and primarily committed to that.

The movement for democracy and human rights needed a film like this, for those unaware of the situation to go into and emerge educated, inspired, and motivated. They will. In a recent interview, Besson talked about screening the film with Burmese refugees, who wept while watching. Referring to this effect on those who have a lot riding on the success of the film, Besson said, “I’m a happy man.” He should be: The Lady is exactly what it needs to be.