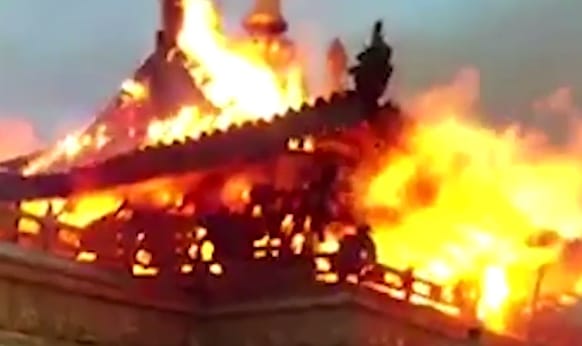 A still from video circulated online of the temple fire.

On February 17, reports coming out of Lhasa, Tibet indicated that a fire had broken out at the famed Jokhang Temple, just as tourists were to begin arriving for the Losar, or Tibetan Buddhist New Year, celebrations there.

The Central Tibet Agency, however, has since reported that the fire was not at Jokhang Temple proper — as has been widely reported and believed —  “but from an adjacent chapel within the Jokhang temple premises known in Tibetan as Tsuglakhang”:

CTA President Dr Lobsang Sangay who is currently on a six-day official visit to Japan sighed relief that the fire did not affect Jokhang chapel but cautioned Tibetans in Tibet to remain alert at large public gatherings especially during occasions such as Losar.

The extent of the damage to Tsuglakhang remains unclear. Images and videos shared on social media show a section of the building’s roof in flames and emitting smoke. Apparently, no one was harmed, and the Tibet Daily reports that the fire was “quickly extinguished.”

Xinhua, the news agency of the Chinese government, reported that the Barkhor market — a bustling shopping area surrounding Jokhang — was temporarily closed after the fire, but has since reopened.

According to reports, Jokhang Temple premises reopened on Sunday with no visible damage except water marks in the main hall of the monastery. The temple will be closed from February 19 to 22 as scheduled for the Tibetan New Year.

Jokhang, whose oldest structures date back to 652, is considered the most sacred temple in Tibet. It is, as an extension of the Potala Palace — built by the Fifth Dalai Lama, and former residence of the Dalai Lama before he fled the country — a UNESCO World Heritage site at the heart of Lhasa.