Here’s the latest from The Under 35 Project, by Marloes Lasker. “I started receiving what was going on purely in the moment.” 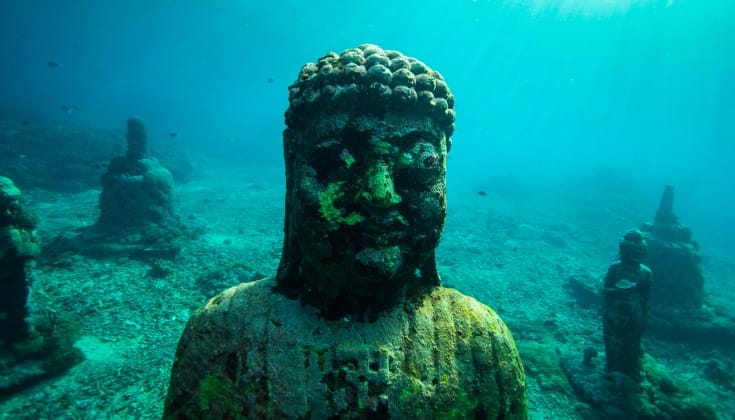 One day the Buddha walked away. Just like that, without any warning. Without even leaving a little kind message or saying goodbye. And on top of that he grabbed all my ideas, about him, about spirituality and about following the way. About doing good and avoiding evil. He took it all, threw it in a plastic bag, swung it over his shoulder and left, the door locked behind him. He was gone, leaving me all by myself, completely alone.

I screamed wildly. Now that he was gone, I felt an overwhelming amount of… nothingness. This was huge. I suffered a devastating loss. He was irretrievable. Wherever I looked or searched, the only thing I encountered were my ideas about him. But where could he be, the Buddha, beyond my ideas? I felt like I was in the desert, surrounded by nothing but sand and dust. He was nowhere to be found. Nothing left to desire, nothing left to gain and absolutely nothing left to be known. What could I do? Everything that came up felt like too much, as if I were once more creating ideas about him. The only option left was… dying. And so I did. I died, and died once again.

I sat on my cushion. Something deep inside me had become silent, absolutely silent. Meanwhile my monkey mind continued babbling and fooling around, jumping from one topic to the next. This didn’t change. I didn’t all of a sudden turn into an imaginary serene or holy person. Nothing like that. I didn’t change. I still was the same young fool on a cushion. But something was connecting to a silent point, precisely within all those thoughts, emotions, loss and pain.

It was then that I started to receive. Receiving exactly what came to me, what was offered. I started receiving what was going on purely in the moment. If I felt sad, I received sadness. I became sadness. If I felt joy, I sat joyful, I breathed joy. I finally started receiving my disease, my disabilities, my dependency, my pain, my suffering, without any restraint. I received it all so boundless, that I became completely one with them. Then I fully was them.

When I saw my teacher a few days later, I started really receiving my teacher. And then I realized: to fully receive my teacher is to fully receive myself. In the midst of not-knowing, in this boundless receiving of the dharma as-it-is, in breathing it all and being it all in equanimity, the seed of compassion started to bloom. This compassion is based on nothing in particular, and it arises just by breathing it all, in and out.

Before the Buddha had left me, I knew all this. I had grasped it intellectually. I had heard and read about it many times. But now it seemed it had shifted into something very physical. As if my body had become three dimensional again, as if a small piece of a huge puzzle had fallen into place. It was as if something that had been closely flowing around outside me had returned to its original place inside my body.

But I also realized that this is not the end. This experience, and any experience or insight, can go deeper and deeper and deeper. There is never a final conclusion in receiving and being, not even in what I’m writing here. How delicious!

The absolute, the emptiness, is not situated in any vague place separate from the relative, the form. No, not at all. The only way the absolute – that still, silent point that is always in motion – can be found is right here in every emotion, thought, sound, person, smell, pain, in this chock-full, bursting life. The only place where no-self can be found is in myself.

The day I lost the Buddha is the day I found myself.

Marloes started her zen practice in 2001 as a student of Nico Tydeman Sensei, and became ordained as a monk in 2010. She is legally deafblind from Usher Syndrome. Marloes lives with her husband and her retired guide dog in Utrecht, the Netherlands.