A bizarre twist of events in Kathmandu led Jessica O’Neill into a meditation class – the place she was most scared to be. 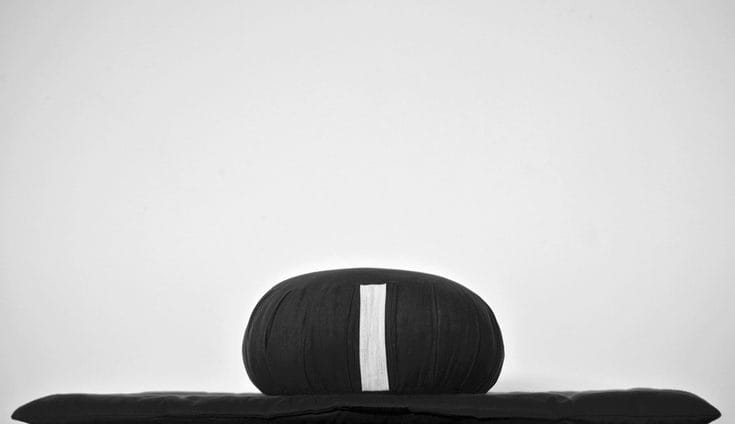 I arrived at the yoga studio at 9:10 that morning. The class wasn’t due to start until 9:30, so I was a little bit surprised to see a small clutch of people waiting outside the studio door. “Pfft. Eager!” I thought, a brief moment of irritation flickering in my mind.

This was my first yoga class in months, and I was eager to stretch and sweat. I had, admittedly, been a pretty epic slacker in regards to my spiritual practice lately. In November and December I spent six weeks at Kopan Monastery and during this time I was immersed in Dharma, convinced that I would never, ever EVER let myself fall off of the meditation wagon again. After all, I would be living in Kathmandu, a city so steeped in Buddhism that I couldn’t possibly abandon my practice… This, it would seem, was overly optimistic.

The yoga class was described online as a “dynamic” Vinyasa flow, which was good – I kind of needed something to kick my ass. For the past month I have only been meditating once a week, at the FPMT Centre in Thamel and I will be honest: a lot of those sessions have been spent thinking solely about my favourite restaurant across the street.

Since moving to Kathmandu the previous month, I had been battling some minor depression and anxiety. I had been trying to get settled in this chaotic city, and despite making a lot of great new friends and doing rewarding work, I have been wracked with homesickness. This pining for Vancouver has been coupled with racing remorseful thoughts about the break-up of a five-year relationship – that ended 18 months ago. My mind has just been looking for scabs to pick, and the cushion has felt unreasonably scary. I decided that the yoga mat might be a more suitable place to ease back into mindfulness, a place to drag some of the demons out of my head and battle them physically instead.

The past week had been particularly angsty, and I broke my self-imposed Kathmandu sobriety in order to down a bottle of red at a Bollywood-themed party. I woke up still able to taste the menthol cigarettes I had greedily sucked down, and I was dangerously close to being hungover.

But not so close that I was willing to break my plans for some Saturday morning yoga. I stood amidst the crowd of people and waited for a few minutes, until an American man came blustering into the studio. “Sorry guys!” he announced. “So sorry I am late!” I was really confused. What did he mean, late? It was still fifteen minutes before the class was scheduled to start!

We all headed into the room, and I set my handbag down and popped over to the loo to take a quick pre-yoga pee (always important). When I returned I noticed something strange. The others were sitting on blankets and bolsters. No yoga mats, and the teacher, Frank, was already instructing despite the fact that it was only 9:20. What in the holy hell was going on?!

The first word I registered Frank saying was “death.” It slowly started to dawn on me. This was not a yoga class. This was a meditation class.

I glanced over at the schedule on the wall and it was confirmed: This was the 8:50am Saturday morning meditation. The “9:30″ class that I had viewed online was indeed taking place…. all the way in Patan at one of Pranayama’s other studios. I had misread the website, and ended up in a meditation. Exactly the place I was most scared to be.

My error was not the only factor that led to this fateful coincidence. On any other Saturday, had I made the same mistake I would have arrived at the studio and been faced with a locked door, the class half-completed. I would have checked the posted schedule, realized my mistake and left. However, this week, the one week that it mattered – Frank was late. He arrived 25 minutes late, seconds after I myself had arrived.

When I put all of this together in my head and realized that we were about to do one of the meditations I find most meaningful — death meditation — tears sprung into my eyes. “What a wonderful karmic surprise,” I thought, “and how fucking terrifying.”

See, karma or fate or God or pure chance — however you want to look at it — something got me on that cushion today. Some kind of wheel turned and set into motion the weird series of coincidences that led my sore post-trekking ass onto the floor of the yoga studio to sit and watch my breath and confront my own mortality.

The purpose of vivid death visualizations are to remind you that at any moment you could die, and so you should never put off the important things in life. You should apologize to people you’ve wronged. You should forgive everyone who has wronged you. You should do things you love. You should pray to whatever you believe in. And most importantly, death meditation reminds you that you should fucking meditate.

I tried to hide from the cushion, from the meditation — but it found me. Thank god. Thank Frank. And thank me.

Jessica O’Neill is a writer, traveler, neon sign historian and self-proclaimed ”strange goth lady” who lives in Kathmandu, Nepal. She works for an NGO that helps to reunite trafficked children with their families, and she will begin a Masters of Cultural Heritage Studies in London in the Fall of 2013. Jessica recently spent 6 weeks at Kopan Monastery where she formally took refuge and tried not to listen to punk on her iPod.