When Holly Stocking discovers an unopened present from her late husband, she contemplates what it really means to be gone — and the things he’s still giving her. 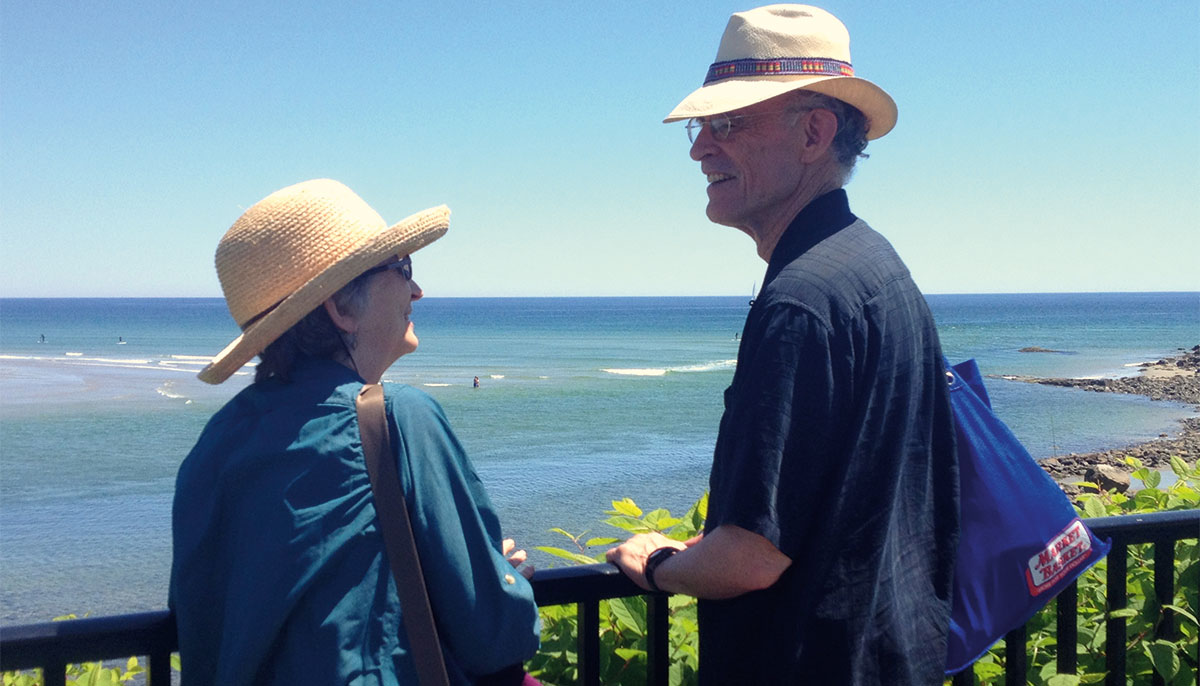 Holly and her husband share a moment by the ocean on their way to Boston for his medical treatment. Five years later she lost Bill to Alzheimer’s. Photo by Jane Harrigan.

The gift topples from the top shelf in my late husband’s bedroom closet. It is a grey wool hat, wrapped in used red tissue paper and fastened with a lopsided piece of scotch tape. On a pink Post-it note, penned in Bill’s nearly illegible scrawl, are the playful and puzzling words: You da one, and you da two! My heart drops in my chest.

I call a friend. “I found a gift from Bill,” I tell her. At first, she thinks it’s another of the “signs” I’ve been looking for in recent weeks—signs that he could somehow be trying to reach me from Beyond. After all, I’d been asking for that after more than a year of steeling myself in the knowledge that he was gone.

A convert to Buddhist teachings on reincarnation, I’m not much of a believer in communicating with the dead. I have come to think that when people die, they move on. Which is why, after Bill died, I had begun referring to him as “The Being Formerly Known as Bill.” And also why, more than a year after his passing, I turned over a favorite picture of him meditating. In the photo, one of his arms is raised to the sky, his unique way of expressing joy during his dharma practice. Gone, my action had said with what I thought was finality. Gone, gone, gone—for good.

My interest in Signs from Beyond arrived unexpectedly when rancorous divisions were tearing our nation apart and I could no longer easily sustain my acceptance of Bill’s “goneness.” I longed to connect—no, I needed to connect—to my departed’s deep, embodied wisdom. So one day, my steely resolve dissolving, I tearfully asked The Being Formerly Known as Bill for access to that wisdom. I don’t know if you are there and can reach out at all. But if there is a way, I sure could use a sign.

To my surprise, a sign appeared almost immediately. My friend called and wanted to tell me about a time when she had been deeply upset, sitting across a table from Bill in our Buddhist monastery’s dining room. At the time, he was entering the later stages of Alzheimer’s, his knowledge of people he’d once been close to, including even me at times, erased. Sensing upset, he had looked kindly at this other being sitting across from him and asked how she was doing. Telling me of the memory, my friend choked back tears. She sensed there was a lesson in there for all of us.

If nothing else, I thought later, the memory of Bill’s kindness was a reminder that when we erase the distinctions we make between ourselves and others, we no longer know stranger, friend, or even enemy. With such distinctions gone, it’s easier to meet heart to heart, offering whatever it is we have to give, even if just a gentle inquiry. My friend’s thoughtfulness in telling me this memory touched me. Perhaps it was indeed a sign of Bill’s once-embodied wisdom, offered by her own.

A second sign arrived a day or two later in the obituary section of our local newspaper. Bill had had two girlfriends in the Alzheimer’s unit he lived in during the last six months of his life. This was the obituary for Girlfriend #2, whom I had judged as “not Bill’s type.” Not only was she from a deeply red part of our state, but unlike Bill, she could be pushy and mean. I told myself her unkindness might have been her disease speaking. But for all I knew, she could have supported the insurrection on Capitol Hill. Still, Bill had reached out to her, offering comfort when day after day she wailed to go home, and soon they were walking hand in hand through the corridors. In the end, sensing that their friendship brought comfort to Bill too, I’d reluctantly accepted her as his companion.

When I texted my friend about this latest possible “sign,” she texted me back: Gone, gone, gone beyond. I took it as a joke, but maybe it was not. The nondual mind pointed to by these lines in the Heart Sutra is not attached, as our own minds are, to appearances or labels. It reaches out to all suffering beings, without discriminating between girlfriend and wife, or red and blue, or even kind or mean. In a deep sense, we are one, as The Being Formerly Known as Bill appeared to be reminding me yet again.

But what about this belated Christmas gift, this warm winter cap from our local fair trade store? It is from Bill himself, hidden away and long forgotten. 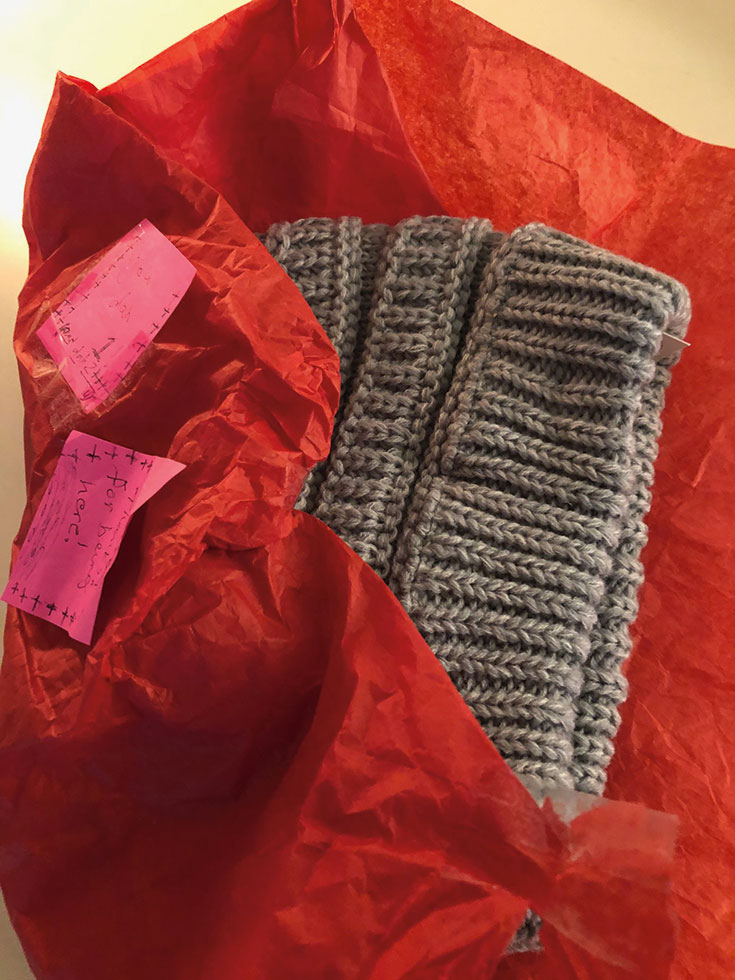 The simple wool stocking cap that Bill intended to give to Holly for Christmas, but never had the chance.

“How does it feel?” my friend asks when I call to tell her of this latest, more tangible gift.

But I am not sobbing. I’m not sure why. Perhaps because it strikes me as a gift from both the Being Formerly Known as Bill and the Bill who was my beloved. It’s no longer easy to distinguish between them.

Rereading the words on Bill’s makeshift gift card with that in mind, I have to laugh: You da one, and you da two! Ah yes!

Then I spy other words in his familiar scrawl, words that I want to say myself right now: Thank you for being here.

Holly Stocking is a retired journalist and educator living in Bloomington, Indiana. She has been a student of Tibetan Buddhism since 1998. She is deeply grateful to all her teachers for their kind advice.