When we think of the Man of Steel, all sorts of powers come to mind: flight, heat vision, near-complete invulnerability. But we often overlook his greatest power: selflessness. Koun Franz on why he and his son aspire to be superheroes. 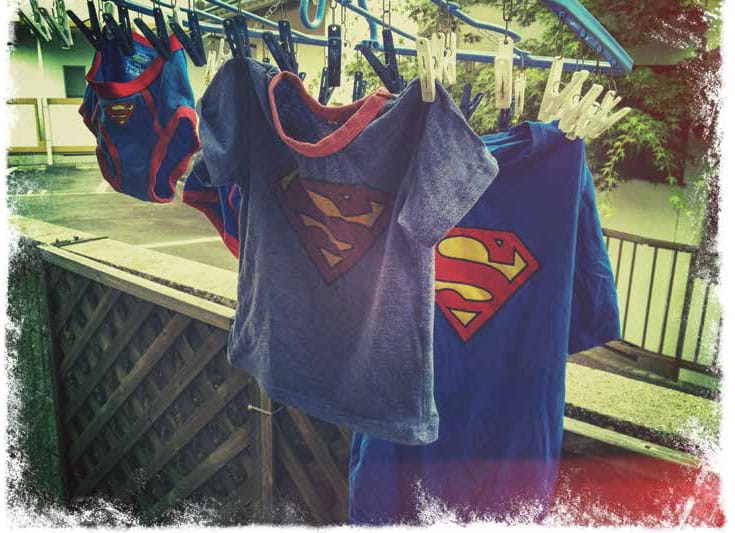 As a kid, I never really got into comic books. We just didn’t have them around. But now, as an adult, I have an unabashed enthusiasm for superheroes and superhero movies. As silly and over the top as they can be, they speak to me on a deep, aspirational level. They’re like my emotional Kryptonite.

I am moved by the tough, selfless, against-all-odds determination of Batman and touched by the youthful courage of Spider-Man, but I have a special weakness for Superman. It’s not about all the things he can do—it’s how perfectly he embodies his function.

I know that some people didn’t like 2006’s Superman Returns, but there is a moment in the film that defines the character in a way nothing else can. Superman flies up into the atmosphere, stops at that line between blue sky and dark space, and closes his eyes. And he just listens.

In that moment, he is Avalokiteshvara, the embodiment of compassion, who hears all the cries of the world and responds with a thousand outstretched, skillful hands. Superman makes a choice to find this vantage point, hovering between the world he protects and the perfect, unrestrained freedom of space, and he listens. Then, in a flash, he turns and speeds toward Earth, toward one of the millions of cries he just heard, to respond. We cheer for him, and we know as we watch that this is not his first time to come to this place or to listen in this way. This is what he does. It’s all he does.

The beauty of superhero stories, for me, is that they invite us to identify with the superhero, to imagine ourselves with those burdens but also with those capabilities. When I watch Superman, I allow myself to be Superman; when I watch Batman, I let myself become him. When the stories take us to their inevitable and unchanging conclusion—that “with great power comes great responsibility”—I hear that as a reminder to myself, even a scolding. We underestimate what we can do. We make excuses. I do. I know I do. But for two hours in a theater, I know how it feels not to. I try on the weight of that responsibility. I sense that awesome power.

Naturally, I got excited about the release of the newest Superman movie, Man of Steel. (It’s now on DVD, et cetera.) And in some ways, I got that same feeling I’ve gotten my whole life, that same resonance. But this time, there is something new in the mix for me, something almost unbearably powerful and sad.

Most of the trailers for Man of Steel strongly emphasize the relationship between Superman and his fathers: Jor-El on Krypton and Jonathan Kent on Earth. In a few cases, the ads are even set to the fathers’ voices. What I find is that as I watch, I am also identifying, for the first time, with the fathers. For sixty seconds, I am watching Superman as if he were my own four-year-old son. I am sending him into that fight, into that danger, hoping he is ready, wanting to say or do exactly what he needs, to offer the words that will spur him to embrace who he most needs to be, who the world needs him to be. Instead of flying into the fight myself, I’m watching my son as he disappears into battle.

It can’t help, of course, that Boy, as I sometimes call him, has taken to dressing as Superman. He has a Superman T-shirt and Superman underpants. The combination is known in our family as “going full Superman.” When he goes full Superman, he feels a little stronger, a little more grown up. I love this, and I take every opportunity to remind him that Superman’s job is not fighting bad guys; it’s protecting everyone else. “Protect” is a word we use a lot at home. He likes to protect his little sister. He likes to protect his friends. Being Superman, he gets to play that it’s his job. And then, if he’s tired of it, he can take it all off and just be a crazy boy.

Two-year-old Girl, on the other hand, doesn’t want to be a superhero. But she is at the magical age where she is starting to gain autonomy in the world. She can do new things every day, all by herself. She makes mistakes, and she gets frustrated, but more often than not, she completely overestimates herself. She thinks she can do anything. It looks as if she’s testing limits, but really, she’s bumping into them. Until she does, she has no idea they’re there.

These are things I want for my children. And when they’re older and their temperaments no longer tend toward playacting, I want them to keep this sense, not only of responsibility and purpose but also of the power to make it all real. I don’t care whether they ever frame it in Buddhist language. If they feel it deeply enough, perhaps all that talk will just be extra. But that’s my language, and so I think in those terms, in phrases like “all beings.” I want them to feel that call, that pull to offer themselves to all beings, everywhere.

At the end of one of the trailers for Man of Steel, we see Jor-El and Superman floating in space, high above Earth. Jor-El says to his son, “You can save them. You can save all of them.” And he means it. His son knows, in that moment, that it’s true.

It’s what I want them to believe.