As owner of a sacred object, we’re obliged to preserve its power for future generations, says art conservator Ann Shaftel. And to do that, we have to understand and respect its original purpose. 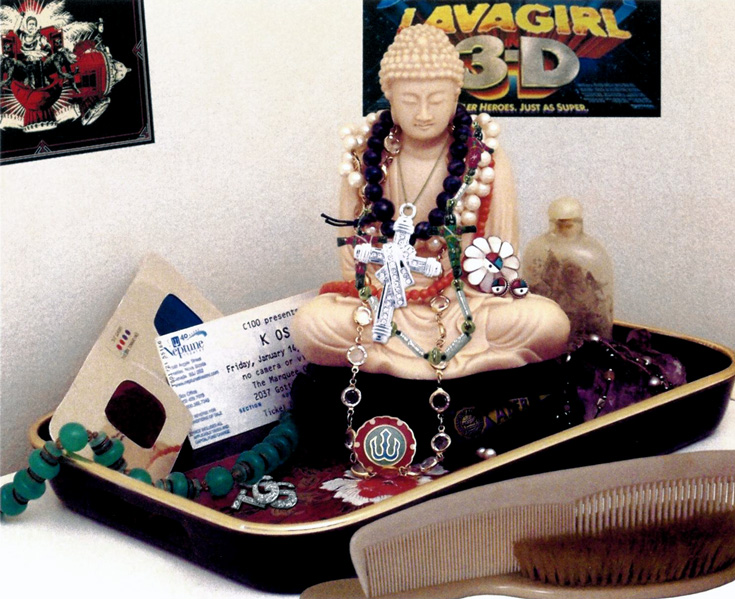 A large Byzantine cross flying wildly around on the neck of a singer in a rock video. A trendy kabbala bracelet flaunted by a movie star on the red carpet. A bodhisattva statue displayed in the bathroom or the bedroom of an art collector. An entire room decorated in aboriginal burial art of various traditions from different parts of the world. A museum where one can see art from five different traditions in the span of five minutes.

All of these are examples of sacred art displayed out of their intended context. In recent years, the museum world has been rocked by controversy about the appropriate conservation, display, and use of sacred art, and museum professionals are starting to use the term “culturally significant” to refer to values in a work that go beyond the aesthetic or utilitarian — values that many curators and conservators believe must be respected. Moreover, many people who are not museum professionals — who simply find an object compelling or attractive — wonder about how to regard and how to care for a work of sacred art.

Through thirty-five years of restoring Tibetan sacred paintings (thangkas) for museums, monasteries, and private collectors, I have developed an understanding of the unique issues surrounding art objects with sacred significance. This kind of art demands a certain kind of respect, and the how-to’s involved in caring for sacred art range from the practical and mundane to the subtle and elusive. Whether you are the guardian of a museum storeroom full of aboriginal burial objects, or you own one thangka painting or amulet, well-informed, skillful, respectful care and handling are crucial.

If we are fortunate enough to own a sacred or culturally significant object, we must show it respect in a way that is meaningful both to the object and ourselves.

To be a good art conservator, one must form an intimate relationship with the object being treated. Without knowing the art’s significance, in addition to its properties as a material object, it is harder to accurately restore and protect it. Therefore, I have regularly interviewed elders and master teachers so that I could marry their wisdom and advice with sound scientific principles when caring for sacred art. A native elder, a member of the Mi’kmaq nation of the Canadian Maritimes, explained to me, “A sacred object, while it may have designs incorporated in it, is not a piece of art.” Likewise, Venerable Thrangu Rinpoche, a learned Tibetan Buddhist teacher, told me, “Sacred art is not just for beauty. It is for teaching and developing inner wisdom and compassion. Since it is not meant just for decoration, such art should be kept in a clean and appropriate place.”

Traditional cultures and religions have strict standards about what constitutes respect. If you bring sacred art from a strong culture into your own world, it makes sense to show it the kind of respect appropriate to its tradition, which requires knowing something about that tradition. Although the notion of “the sacred” is central to the Judeo-Christian tradition, the subtleties of spiritual and practical care of sacred art are often not easy to translate into the language of our spiritually diverse, eclectic, and increasingly secular culture.

In the United States, the Native American Graves Protection and Repatriation Act (NAGPRA) defines sacred objects as “specific ceremonial objects that are needed by traditional Native American religious leaders for the practice of traditional Native American religions by their present-day adherents.” Under NAGPRA, some sacred objects are returned to their tribes, while others that remain in museums benefit from the advice of aboriginal elders about how to store and display the objects. This is not always a straightforward process.

In Hawaii, one museum returned sacred burial objects to an aboriginal group, which immediately buried and sealed them in a cave. Other native groups contested this group’s claim to exclusive right to rebury the objects, and currently, the museum is under pressure to force the unsealing of the cave, the unburial of the objects, and their return to the museum until the court battle is settled.

Toronto’s Royal Ontario Museum, in close cooperation with members of the Six Nations Reserve, welcomes the members of the tribe to come to the museum and “feed” the Iquoisain, facemasks of their culture. According to Dan Rahimi, executive director of gallery development for the ROM, the feeding ritual involves burning sweet grass, saying prayers, and offering corn mush. After that, participants in the ceremony eat the corn mush. This is quite a departure for a museum, since food substances are never allowed in museum storage areas for fear of subsequent insect and rodent infestation, and of course fire and smoke of any kind is strictly forbidden. In order to honor the wishes of the reserve members and respect the objects in the way they are meant to be respected, the masks are “stored with the general collection and then brought into a specially built ceremonial room with venting that leads directly out of the building to allow for sweet grass to be burned,” says Rahimi.

These examples raise questions about subtle respect and innate power in sacred art. If, for example, the Iquoisain were not fed in the museum, would their power decrease? Do the Hawaiian burial objects have power only when sealed in a cave and not displayed or stored in a museum? Is there power simply in seeing such an object, which would argue for the value of museum display?

In my own work with thangkas and their owners, the question of the thangkas innate power often arises. Many people wonder whether the thangkas they see in museums would be considered “dead” somehow by those within the tradition. When a thangka painting is completed, it is ceremonially empowered with the nature of the deity represented. According to Tibetan teacher Mingyur Rinpoche, the thangkas carry that blessing “until the four elements — fire, wind, water, or earth — destroy the image.” The method for removing blessings from thangkas or rupas (ritual statuary) that are no longer to be used is to burn or bury them, he explains.

I have asked many great teachers about whether previously restricted images, now readily visible in museums, carry their original subtle empowerment. The general agreement is that for non-Buddhists, there is what is called a “seed of liberation,” which is planted in the viewer just by virtue of looking at a blessed thangka. By contrast, however, Peter Irniq, a respected Inuit elder and commissioner of the Territory of Nunavut in Canada, says, “When carvings are in a non-Inuit home, they have no power, just as the carver has no power over the spirits who inhabit the carving.”

I have gleaned one consistent message from speaking to many elders from a variety of traditions: if we are fortunate enough to own (or be the steward of) a sacred or culturally significant object, we must show it respect in a way that is meaningful both to the object and ourselves. We must be particularly sensitive to such respect when we have no cultural relationship with the object. In that case, it seems we ought to get to know it and how it “likes to be treated.” Throughout history, as societies have been conquered, their cultural objects —imbued with profound sacred significance—have been treated according to the aesthetic and religious mores of the conquering culture. Such desecration can take the form of something as dramatic as the dynamiting of the Bamiyan Buddhas in Afghanistan to something as banal as decorating a doctor’s waiting room by hanging African masks next to the rack of old magazines.

In fact, when we take possession of sacred or culturally significant objects, we assume a responsibility to be a steward of these treasures. They have been around, in many cases, for centuries before we were born, and with proper care, they will survive for centuries beyond our death. With proper attention to how they are to be treated, their original sacred power may still be transmitted to people far into the future, which was why they were created in the first place.

Ann Shaftel is a preservation consultant and conservator specializing in Buddhist art. Her clients include museums, governments, universities, and Buddhist monasteries around the world.