On Saturday, Democrats in Hawaii will head to the polls to decide who they want to represent them in the gubernatorial election this November, and the frontrunners are two Buddhist politicians: Congresswoman Colleen Hanabusa and incumbent Governor David Ige. Cristina Moon reports on the race. 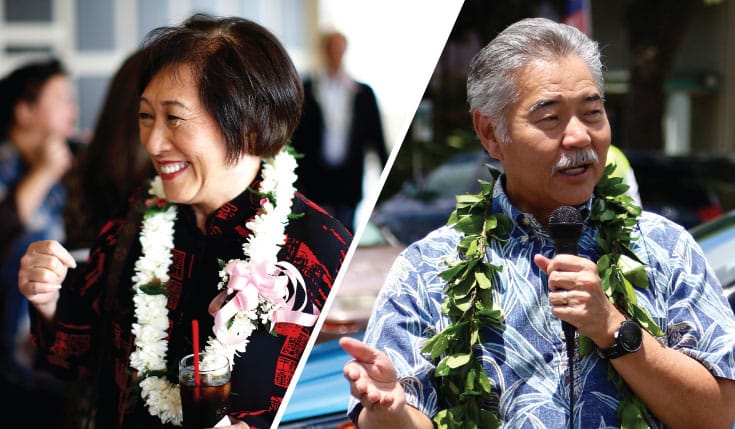 It’s Obon season in Hawaii. Dozens of Buddhist temples across the islands are holding Obon festivals every weekend to honor the spirits of their community’s ancestors.

It’s also an election year, and the festivals are an important stop for all sorts of politicians—including the top two contenders for the Democratic nomination for Governor of Hawaii, US Congresswoman Colleen Hanabusa and incumbent Governor David Ige. Both are Buddhist.

Based on sheer demographics, Hawaii is probably the only state where two Buddhists could end up as frontrunners in a gubernatorial race. While Hawaii constitutes only 0.4% of the US population, about 5% of all American Buddhists live in the state. Of the 1.3 million Japanese Americans living in the US, almost a quarter live in Hawaii, comprising 16% of the state’s population. Buddhists in the state represent a range of ethnic groups, some with ties to Hawaii’s early plantation days and others who have just recently converted.

For Japanese American Buddhists in Hawaii like Hanabusa and Ige, Obon festivals have always been a fixture of spiritual and community life. As a child, Hanabusa told Lion’s Roar in an interview, she used to travel around the island supporting local Obon festivals every year. In a recent video, Hanabusa is seen wearing kimono and doing traditional Japanese and Okinawan dances that are the hallmark of Obon festivals.

“People have been messaging me saying, ‘Hey! I didn’t know that you knew how to do Obon Odori!’ They had no idea it’s something I grew up with,” says Hanabusa.

Ige also comes from a Buddhist family. While the governor wasn’t available for an interview, he provided a statement to Lion’s Roar describing his Buddhist background:

“Hawaii’s first generation from Japan and Okinawa, my grandparents, had a saying: Kodomo no tame ni,” — meaning, for the sake of the children. “All that they suffered and endured, they did willingly for the sake of their children and the future. Many of these families, including mine, were Buddhist, and Buddhist teachings play a role in our approach to life and influence how I conduct myself as Governor. We know that change is always possible, and that our actions have consequences. My approach to improving Hawaii has been to serve with compassion and work collaboratively to achieve positive solutions.”

Hanabusa and Ige both emphasize the rich history of Buddhism in both Japan and Hawaii.

Hanabusa speaks warmly and at length about her Buddhist upbringing: becoming old enough to make rice offerings at the shrine in her home; going to Obon; and learning ikebana — Japanese flower arranging. But she also notes how Japanese Buddhist leaders were singled out and persecuted during World War II. Both of her grandfathers were founding members of the Hongwanji Buddhist mission on Oahu’s Waianae coast, and both were sent to internment camps during the war.

Hanabusa and Ige both emphasize the rich history of Buddhism in both Japan and Hawaii. In her interview, Hanabusa described the surprising martial history of Japanese Buddhism, in which the sons of shogunate and samurai families often trained in martial arts before becoming Buddhist monks. She notes that her flower arranging teacher was a direct descendant of feudal lord Oda Nobunaga, who was known for unifying Japan and brutally suppressing his opponents.

“His lineage came from the most brilliant general,” she says of her teacher. “But the tie was between Buddhism and the arts. Ikebana was to clear your mind. If you can’t clear your mind, you can’t do it.”

In Hanabusa’s campaign office, there’s a flip chart with three phrases written on it: decisive leadership, collaborative personality, and follow through. One of her campaign volunteers says she’s been supporting Hanabusa’s campaign since she first ran for the state senate. She says that what she likes most about Hanabusa is that she’s a fighter. “I know she’ll fight for Hawaii. And we need her to.”

“It’s true when people say I’m a fighter,” says Hanabusa. Many attribute that to her upbringing in Waianae, a part of Oahu where almost 20% of the population lives below the poverty line. “People think that because I’m from Waianae all I do is scrap.” But she says her ferocity actually came from the lessons she learned as a Japanese American growing up in Hawaii.

“When it comes to fighting and standing up, the best example is the 442nd and the 100th,” she says, referring to the military units of Japanese Americans from Hawaii who fought during World War II.  “They fought. And they fought for a country that thought they were enemy aliens. They fought for the right to go there and give their lives.”

She recalls a story that the late Hawaii Senator Daniel Inouye, who fought in the 442nd, used to tell about his father’s advice to him before leaving for the war.

“His father told him, ‘When you go off to war, you act like a carp.’ A carp fights for its life. But do you know that when a carp is put on the cutting board, it stops? Because it knows it’s going to be killed and become food. He told him, ‘You be like a carp. Fight all the way. But when you know the end is there, you die with dignity. But you fight like hell up to that point.’”

This is something, Hanabusa says, that Westerners have trouble understanding.  “It’s so typically Japanese to me, and that’s the most difficult part to explain about Buddhism and being Japanese to other people. Maybe it seems schizophrenic, but it’s really two sides of the same coin. That’s what we’ve been raised to be like.”

Hanabusa has applied her fierceness to a range of issues in her district and for Hawaii, leading the education initiative SeaRider Productions in Waianae High School and creating captive insurance — a mechanism that helps businesses create their own health insurance pools (which are important because employers in Hawaii are required to offer insurance to even part-time employees). She has also focused her campaign on addressing issues that are important to young, working-class voters in Hawaii — especially developing housing and job opportunities around public transit hubs.

Ige has also supported initiatives like Hawaii’s Promise to make college more accessible to young people in Hawaii and installing cooling systems in classrooms across the island. He approved funding for a statewide elder care program called Kupuna Caregivers (kupuna means elder in Hawaiian). Affordable housing and growing homelessness have been major issues during his term, as well.

In an overwhelmingly blue state where the primary often matters more than the general election, whoever wins in Saturday’s Democratic primary is likely to be Governor in 2019. That is as long as he or she can fend off a surprising challenge from the Republican Party — a popular young, female, Samoan, and Hawaiian candidate, named Andria Tupola, who has rallied unexpected support from young and working-class voters and is likely to win the Republican primary. Her main campaign message has been — believe it or not — a rallying cry for change. Yet another thing that might only be possible in Hawaii.