Governor David Ige — one of America’s most prominent Buddhist politicians — on immigration, climate change, and compassion in governance. 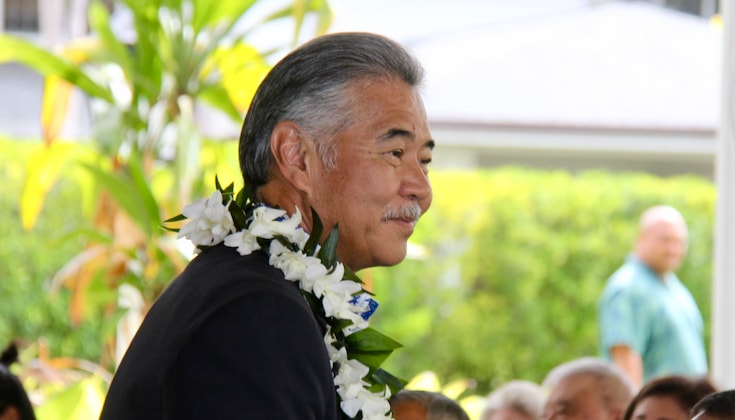 On November 6, Hawaii gubernatorial incumbent David Ige won a second term. He’s set to take on some unique challenges, as Hawaii is strategically positioned between the US and Asia and faces acute threats from climate change. In the past year alone, the state had a false ballistic missile alarm and the wettest hurricane on record. Hawaii also has one of the highest concentrations of immigrants in America, many of whom are frightened by Trump’s anti-immigrant policies. Cristina Moon talked with Ige about how he plans to navigate these challenging political times.

Cristina Moon: What does it mean to you to be Buddhist?

David Ige: For those who grow up Buddhist in Hawaii, we’ve always been Buddhist, so I’m not certain. It’s not like I changed religion.

When I speak with other Japanese Americans across the country who immigrated to California, Seattle, Chicago, or Washington, DC, it’s interesting because in virtually every instance, the primary motivation is to forget where you came from, try to assimilate as quickly as possible—trying American religions, trying to get into American schools and be as American as quickly as you can.

We’re not the enemy. Our community benefits from immigrants and the new cultures and traditions they bring with them.

I think Hawaii is very different from the mainland. The First Nations of Hawaii truly were about respect for the culture and embracing immigrants. In Hawaii, we are encouraged to stay connected with where we came from. So, I’ve always been a Buddhist and it’s not something that’s ever apart from who you are. It’s a different kind of experience.

Were there cultural practices or forms that were part of your growing up that came from Buddhist traditions?

We had a sense of family and community around Buddhist traditions, like celebrating Obon. The temples were important. There was a judo dojo at our church. Many boys and girls went and took judo after school. There was language school to learn Japanese and Buddhist school to learn about religion. In many instances, Buddhist temples became the heart of the community, so Buddhist values were pervasive in everything we did.

In your tenure, you’ve dealt with crises like lava flow on the Big Island, hurricanes, and climate change. These crises can create a level of deep, existential fear. How do you address that fear?

I realize that part of my responsibility as governor is to be able to calm the fears of the community — to assure them that we are prepared and will be able to take action to keep them safe. In those situations, the community really wants to be assured that their safety is top of mind with government officials. I try to assure the public that they need to remain calm and that officials are working together to keep everybody safe.

I have been criticized by some as being emotionless, almost to the point of not caring. I do care about people, intensely. There are many things that go through your mind as you’re facing these devastating acts of nature, but it’s important for government leaders to be viewed as calm and in control to the level that we can be.

What does compassion in governance mean to you?

A part of Buddhist teaching that is reflected in the broader sentiment of the community is about caring and being compassionate for those who are less fortunate, and that everyone is entitled to a life of dignity.

In my work with the homeless, I’ve heard from various sectors, “Why should we care so much about those that are homeless?” But the overwhelming sentiment is that we need to help them, that people shouldn’t be forced to live on the street. We should do everything we can to make sure they have a dignified life. That comes from my core values that are much aligned with Buddhist beliefs and philosophies.

What’s a Buddhist teaching that’s been most influential for you?

Perseverance, focus, and not being distracted. And being compassionate and respectful to everyone. Being committed to doing the right thing in the right way — but being respectful of all points of view. I think that’s what drives my decision-making and how I choose to govern.

You’ve been proactive in combating many of Trump’s policies, such as the Muslim travel ban and the withdrawal from the Paris Climate Accords. Why do you see that as important for Hawaii?

I knew that there would be many differences with the Trump administration. For me, it was about historical parallels and the basic principle that our state and country is stronger because we have immigrants.

As a community of immigrants, it always amazes me to hear how the immigrant experience — of Filipinos, Koreans, Chinese, and Japanese — and the reasons for immigration are almost exactly the same. The experiences have so many parallels. Many Japanese Americans were directly impacted by Presidential executive orders that were contrary to the constitution. So, clearly, standing up for immigrants was very important.

We’re not the enemy. Our community benefits from immigrants and the new cultures and traditions they bring with them. They make our community better.

That’s a lesson I’m proud to share when I travel around the country. There is no other community that has had the experience we have had here in Hawaii. And, I think we’re better than most communities around the world at embracing immigrants. We want to help them be successful and become part of our community.

What do you feel is the greatest challenge facing Hawaii right now?

I’ve been very active on climate change and sea level rise because it’s become very clear that the planet is on a path that will wreak havoc, especially to island communities. We see accelerated erosion to our beachfronts across the state. It’s very bad on the north shore of Oahu now, and we see that expanding.

Taking action on climate change is important. Transforming our economy and energy systems to renewables is very important. Hawaii is committed to doing its part.

Taking action on climate change requires long-term perspective. That reminds me of the Japanese phrase, “for the children.” People in Hawaii seem willing to take a longer view, too.

Absolutely. There is a willingness to take the longer view and leave behind a better community than the one we received. As a community, there is a core value to recognize that what I do impacts my friends and neighbors. But, more importantly, what we do as a community really impacts the future and our children. Our children’s children deserve a better future.

Is there a message you want to make sure our readers hear from Hawaii and from you?

There’s strength in diversity. Our communities can always benefit from diversity. It’s unfortunate that, at the national level, there’s been such an effort to divide people based on differences. The lesson that we have learned in Hawaii is always that when we work together, we can do great things.