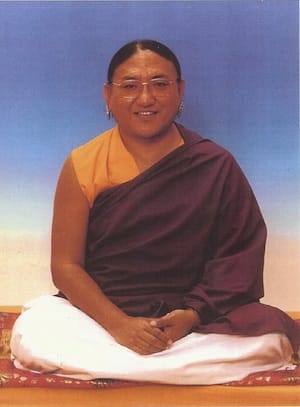 Rory Brendan Lindsay on the history of The Sakya Trizin lineage in Tibetan Buddhism, in anticipation of the 41st Sakya Trizin’s upcoming teaching tour.

The Sakya Trizin is embarking on a teaching tour in the West this month. Scheduled events include Padmasambhava and Chakrasamvara empowerments in Boston, a monthlong Path and Result teaching cycle in Walden, NY in June, and a Manjushri empowerment in Los Angeles in mid-July. In August he will be giving teachings and empowerments in Canadian cities including Victoria, Vancouver, Calgary, and Toronto. Teachings are also planned in Mexico, Costa Rica, and Brazil.

The current Sakya Trizin, or “Sakya Throne-Holder,” is the forty-first in a family lineage stretching back to eleventh-century Tibet. Like the Dalai Lama of the Geluk school and the Karmapa of the Kagyu school, the Sakya Trizin is the supreme authority of the Sakya school, from which some of Tibet’s most innovative and influential scholars have emerged.

The 41st Sakya Trizin was born in Tibet in 1945. His early years were in many ways tragic: his mother passed away when he was three, his older sister when he was five, and his father shortly thereafter. He had already begun traditional Buddhist training under his father, but after his father’s death, his aunt became his primary caregiver and arranged his education under other masters. He received extensive training in Buddhist ritual, philosophy, and meditation until his studies were disrupted when he fled to India amid the tumult ensuing from the 1959 Tibetan uprising against the Communist Chinese invasion that had begun nine years earlier.

In India, the Sakya Trizin faced the challenge of continuing his studies while creating a new Sakya community in exile. With limited means, in 1964 he established the Sakya Center in Dehradun, which served as the new headquarters for the order. Eight years later, with the help of the Dalai Lama, he and the late Khenpo Appey Rinpoche established Sakya College, also in Dehradun, which became a major center for advanced studies in Tibetan Buddhism. Since then he has created other important institutions for Tibetans in exile, including a Sakya nunnery, an advanced college for nuns, and a hospital.

Be sure to check out the feature-length teaching by the Sakya Trizin titled “Beyond All Attachment,” from the Summer 2011 issue of Buddhadharma.  In it he explains that it’s not enough just to renounce attachment to this life. To be truly liberated, we must transcend the idea of a solid reality altogether.