“If we only explore interdependence to feel good,” writes Dr. Kamilah Majied, “we miss a lot.” She shares the importance of recognizing and honoring the deep connections each of us has to Black lives. 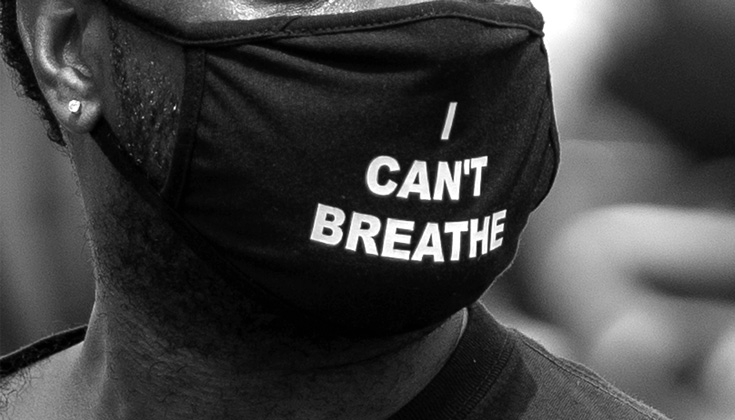 “All beings and phenomena exist or occur because of their relationship with other beings and phenomena, and nothing in either the human or the nonhuman world exists in isolation. All things are mutually related to and interdependent with all other things. They all form a great cosmos maintaining the rhythms of life.”

—From Planetary Citizenship, 2004, by Daisaku Ikeda and Hazel Henderson

One of the most clarifying principles articulated in many philosophical and religious teachings as well as in the natural and social sciences is the interconnectedness of all life. The backdrop of the intersecting, related pandemics of surging Covid-19 infection and surging anti-Black violence places the reality of human interdependence in stark relief.

It has always been true that our out-breath is someone else’s in-breath, that our in-breath is someone’s out-breath. Yet, that truth takes on a more compelling aspect when we realize that deadly viruses may be borne on the breath we inhale or exhale. These crises remind us that we must care for ourselves and for one another, knowing that both the biological and sociological toxins we carry are communicable and can destroy our well-being and that of those around us. Just as the climate crisis has taught us that there is no “away” where we may throw our refuse, there is also no “they” who bear the suffering of racism alone.

If we only explore interdependence to feel good, we miss a lot.

Because of white supremacy, which subjugates our awareness of the contributions of Black people to every aspect of our lives, most of us have a compromised view of interdependence. This means we need focused reflection with the intent to surface the obfuscated deep connections each of us has to Black lives. Black people are known to be caregivers for other Black people. Yet far less attention is paid to how Black bodies have cared for white bodies as well as the bodies of people of every ethnicity throughout time and place.

Considering the disproportionately large numbers of Black people who are doing the work we now recognize as essential, valuing and protecting Black lives is key to preserving the well-being of humanity amidst these pandemics and beyond. Consider the work that many Black bodies engage in — the cleaning, nursing of the young, ill, and aged, as well as the food preparation and delivery. This is service in the holiest meaning of the word. Therefore, treasuring Black people is both a gratitude practice and a practice of self-preservation.

The debt of gratitude owed to Black people is not solely for the current care being rendered by Black bodies in the service of so many. To be self-aware, we must acknowledge the historical labors of Black people. These labors form the foundation upon which all that we enjoy is built. Just as we owe Native Americans reparations and gratitude for their stewardship of the lands of the Americas, we owe Black people reparations and restorative justice for their forced labor rendered under egregiously inhumane circumstances to build the edifices, industries, and institutions white people benefit from disproportionately. The United States and the Western world owe much of their material wealth to the trafficked and enslaved Africans who helped build these nations. A debt is also owed to the lands of the African continent itself because its resources continue to be extracted and exploited to benefit other nations just as they have for centuries. The stolen land of these United States was cultivated by Black hands under predatory circumstances and much of the land continues to be cultivated and sustained by Black hands even as Black people are denied space and freedom on these lands.

When we remove the veil anti-Black racism casts over our vision, we deepen and broaden our insight about our relationality to humanity. This need not be done as a favor to Black people who have long endured without this recognition. Exploring one’s interdependence with Blackness is an opportunity to gain clarity about one’s own reality and thus heighten the self-awareness meditative practice is aimed towards.

Although recognizing our interdependence is often depicted as experiencing a rapturous sense of easeful bond with all beings, if we only explore interdependence to feel good, we miss a lot. Some aspects of our interdependence are painful to notice, and for that reason we often avoid them. Yet that avoidance compromises our insight.

For example, it does not feel good to notice that our ancestry, our very bodies down to our DNA, might be results of the routine rape that characterizes the trafficking, enslavement and subjugation of Black women. Yet this is a truth that we must face in order to have full awareness of who we are.

In his novel, Just Above My Head, James Baldwin reminds us that even as white police hunt and brutally kill Black people “not all of the sheriff’s children are white.” Baldwin notes that in these attacks on Black people by white vigilantes or police “kinsman was facing kinsman… father slaughtering son, brother castrating brother, sister denying sister, kissing cousins chaining kissing cousins, tracking them down with dogs, gutting them like cattle, as they had sold them like cattle.”

Baldwin’s literal prescience in this articulation of Black and white relatedness is validated by the recent study published in the American Journal of Human Genetics. The study offers DNA-based data that demonstrate the horrifying rate at which enslaved Black women were raped by white human traffickers and enslavers throughout the Americas. The data-based study offers incontrovertible evidence of the predacious sexual proclivities of generations of white people throughout the Americas.

The researchers and authors of reports on these studies propose that Black people can use the findings to reconcile with what our Black ancestors endured. What the articles on the data fail to do is to invite white people throughout the Americas to contemplate what their ancestors perpetrated.

Black people throughout the Americas must face the painful truth that our ancestors were raped in order to face all of who we are. A great many of us are grandchildren and great great-grandchildren of women who were raped. We likely have the rapist’s blood in our veins, as well as their DNA, and sometimes their skin color and features. White people must also reconcile with their legacy — with the fact that at least some of their ancestors were rapists. Towards deeper self-awareness, white people can begin to integrate that truth into their understanding of themselves in relation to Black people. All people get to consider how this history created our gene pool and what it means about us in relation to the literal brothers and sisters we have amongst us now.

It has always been true that our out-breath is someone else’s in-breath.

In addition to our blood/familial relationality, we have the opportunity to consider our interdependence with Black thought. Ignorance about the thought-leadership of African-Americans is exemplified in what we don’t know or remember about how the founding ideals of the U.S. evolved. When we think about the “framers,” we think of white slave holders as the ones who set the stage for whatever equality we now enjoy in the U.S. We often forget the leadership of Sojourner Truth, Harriet Tubman, Frederick Douglass, Nat Turner, WEB Dubois, Booker T. Washington, Dr. King, and Rep. John Lewis when we feel grateful for the relatively inclusive reality we enjoy now.

Were it not for them and the people of all ethnicities who supported them, we would still be experiencing the incoherence and utter moral degradation of living amidst open enslavement and apartheid. For example, in 1890 Frederick Douglass clarified that “We do not have a Negro problem. The problem is whether the American people have loyalty enough, honor enough, patriotism enough, to live up

to their own constitution.” Douglass’ type of clarifying leadership is what Nicole Hannah Jones is referencing in her 2020 Pulitzer Prize-winning commentary entitled America Wasn’t a Democracy, Until Black People Made It One.

There are indeed countless levels on which we can witness our interdependence with Black people and allow that awareness to inform our thinking and behavior. For example, white people often find themselves speaking in the Black vernacular, using Black idiom or expressions. This is not new. Expressions as old as the word “cool” as used to describe something good, come from Black dialect. The precision of Black dialect — the succinct manner in which it captures a given reality — makes it irresistible for people of every ethnicity. However, when Black people speak this way, we are often presumed to be uneducated, or even possibly dangerous thugs. When people of other ethnicities speak Black dialect, they are usually perceived — in fact often do it to be perceived — as edgy or current. One way of acknowledging our interdependence with Blackness is to stop this cultural appropriation by acknowledging the source that informs our speech. The cumbersome practice of prefacing the use of Black expressions with “As African Americans say” is exactly the practice non-Black people need in order to pause and notice that they did not invent the phrasing they utter. Furthermore, acknowledging Black people as the source allows one to notice that the people who created that wording are often deprived the privilege of even speaking their own dialect without peril, even as others do so freely.

Setting the intention to notice our interdependence with Blackness and acknowledging that interdependence with gratitude, right speech and right action are meaningful steps towards interrupting anti-Black racism and towards more insightful, authentic engagement with who we really are in relation to one another.