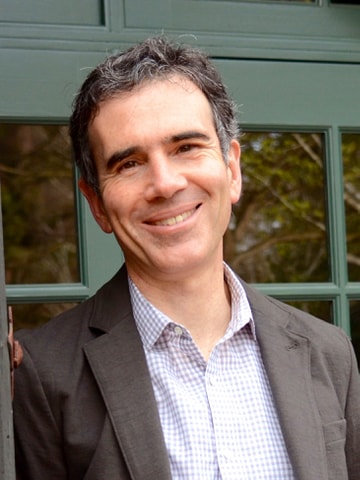 With the release of Incredibles 2, Pixar’s feature films have collectively brought in more than $13 billion at the worldwide box office. Before the animation studio was a household name, Lawrence Levy helped the company find its “middle way” between business and storytelling.

Lawrence Levy stays for the credits of every Pixar film. Whether it’s Finding Nemo, Inside Out, or The Incredibles 2, he doesn’t leave the theatre until the last name creeps across the screen and the lights flicker on. It’s his way of acknowledging everyone who made the film, which he knows isn’t an easy task.

From 1994 to 1999, Levy was Pixar’s chief financial officer. He helped the money-losing company become a multibillion-dollar animation studio, and he sat on the board of directors until the company was purchased by Walt Disney in 2006.

But Levy left the glitter of the entertainment industry and the grind of corporate life to explore Eastern philosophy and religion. After working for Pixar, a company dedicated to telling stories, he discovered Buddhism, a religion that looks beyond the stories we tell ourselves. In 2003, he cofounded Juniper Foundation with his Tibetan Buddhist teacher Segyu Choepel Rinpoche. Named after the hearty tree that grows in rugged conditions—up to 13,000 feet above sea level—Juniper takes Buddhist practices and reinvents them for contemporary meditators.

Creative vision does not spring forth fully formed. It evolves, meanders, and all but stumbles its way to fruition.

Levy’s memoir To Pixar and Beyond chronicles his life at Pixar, his Buddhist path, and how these two parts of his life are both applicable to the Middle Way.

“One idea that strongly appealed to me was the Middle Way, an ancient Buddhist philosophy that has inspired and guided meditation masters for centuries,” Levy writes. “It is based on the insight that the mind cannot comprehend the full complexity of reality. Instead, in order to function, we rely on approximations of reality. I find it’s a beautiful philosophy because it helps us push away from the stories that control our lives. What we take as truths are often merely paradigms that we can go beyond.”

The Middle Way, or madhyamika, is the middle ground between attachment and aversion, between being and non-being, and between rigid eternalism and groundless nihilism. The more we delve into the Middle Way, the more we rest in the play of opposites. “It’s is the notion of pushing off from extremes and finding the moderation between them,” Levy says.

After he left Pixar, Levy realized he helped the animation studio navigate its own middle way between groundbreaking technology, complex storytelling, and financial security.

But Levy never planned to delve into either computer animation or Buddhism. He studied at Harvard Law School, and then became a successful attorney and financial officer in Silicon Valley. One day, on an unsuspecting November afternoon, the phone in his office rang.

Jobs had lost much of his traction after unceremoniously leaving Apple ten years prior, but he was still a Silicon Valley celebrity. Levy was shocked.

“I have a company I’d like to tell you about,” he said.

Mind racing, Levy listened as Jobs told him about Pixar.

The company had revolutionized the field of high-end computer graphics and was focused on producing its first feature film, Toy Story, but it wasn’t considered an entertainment company. It was known for making software, not blockbusters. Jobs was looking for someone to turn Pixar around, but—with zero profits after burning through $50 million of Jobs’ personal funds—Pixar was incredibly unappealing to investors. Hesitantly, Levy agreed to visit and see Pixar for himself.

Upon arriving at the unremarkable office, Levy met cofounder Ed Catmull and creative lead John Lasseter. After a short tour, he was asked to watch an unfinished clip from Toy Story.

“I witnessed a level of creative and technical wizardry that I could never have imagined,” Levy said. He accepted Jobs’ offer and began the daily two-hour commute from his home to Pixar’s office. “I felt like I had made the biggest mistake of my career!” Levy says.

Over the next three years, Levy helped Pixar secure a place in the world of computer animated films while preserving its creative heart. There was a narrow path between the innovative and bureaucratic tensions of Pixar, but Levy found and followed it resolutely.

“Pixar’s creative culture was the unsung hero of great innovation,” Levy said. Creating complex stories often comes at the expense of being able to play it safe. The four thousand storyboards for a film are often redrawn five or six times. Sometimes the tone changes. Sometimes the characters evolve at the last minute. “Creative vision does not spring forth fully formed,” Levy said. “It evolves, meanders, and all but stumbles its way to fruition.”

Levy respected both sides of the company — innovation and business. In a sense, he found Pixar’s madhyamika, the middle way of moderation between indulgence and restraint.

In 1999, Levy left his position at Pixar after enacting a successful financial strategy. Although he remained on the board of directors, he channeled his efforts away from the stress of corporate life and toward wisdom, joy, and peace by exploring Eastern philosophy and religion. On his last day at Pixar he sent a goodbye email to staff that read:

“For those of you who take yoga, you know that at the end of each class it is common to place the hands together and utter the Indian greeting ‘Namaste.’ It means: ‘I honor the place in you of love, of truth, of peace. When you are in that place in you and I am in that place in me, we are one.’ Namaste.”

Levy walked away from Silicon Valley and soon stumbled into Buddhism.

He met Segyu Choepel Rinpoche, a Brazilian-born Tibetan Buddhist teacher based in Sebastopol, California, who helped him sink his teeth into Buddhist practice. Over the next year, Levy and his wife, Hillary, visited Segyu’s home for classes and retreats.

Segyu is recognized as a master and holder of the Tibetan Buddhist Segyu lineage. His primary teacher of more than 30 years was Kyabje Lati Rinpoche (1922-2010), former abbot of Gaden Shartse Monastery in Tibet. From 1994 to 2002, Segyu operated a traditional Tibetan Buddhist center, but dreamed of having a wider impact on the modern world.

Along with two of Segyu’s students, Levy and Hillary founded Juniper Foundation in 2003 to make Buddhism accessible to those living a contemporary life. They worked together to study the Tibetan Segyu tradition and present its long-standing teachings in a secular form.

That’s the dream, that’s the Middle Way — to bring together what I would call outer mastery and inner mastery.

“We try to initiate a way that we can live that integrates these amazingly transformative practices and teachings, but also keeps us embedded in our modern lives,” Levy said. “That’s the dream, that’s the Middle Way — to bring together what I would call outer mastery and inner mastery.”

Levy says that most people are good at performing well and being productive, but inner mastery is often the part that gets forgotten.

Currently, Juniper consists of a couple hundred people who gather once per week for meditation. Levy looks back with fondness on his days at Pixar, but he also appreciates that he is on a different journey than the corporate career path he pursued before.

Meanwhile, Pixar has grown. The office is no longer located in a bland building on the outskirts of Silicon Valley; the studio encompasses an entire campus dedicated to honing the craft of computer animation. Pixar’s staff of more than 700—which has ballooned from 120 when Levy was CFO—still strives to achieve the same, unchanged mission: tell great stories.

Instead of a two-hour commute, Levy starts his day at 6:30 am with a meditation practice. He sits on a cushion before a small altar. Sometimes he lights a candle or cuts fresh flowers from his garden. He chooses a meditation from a range of Vajrayana practices. He might sit for 10 minutes or 40 minutes. Either way, Levy acknowledges the endless dance between order and freedom in his own being, as well as the world around him.

He still works at finding the middle way between indulgence and restraint, between attachment and aversion, but this time he isn’t doing it for an animation studio. He’s doing it for himself — for his own inner mastery.

“I am convinced that we humans do better when we have something to ground us, a deep source from which we can draw wisdom, insight, and inspiration,” Levy writes at the end of his memoir. “The goal of that source is to empower us, to bring depth and fulfillment to our lives, to give us the means to soar.”