Gesshin Greenwood examines how Netflix’s Tidying Up star Marie Kondo combines the emptiness of Zen Buddhist practice with her signature spark of joy. 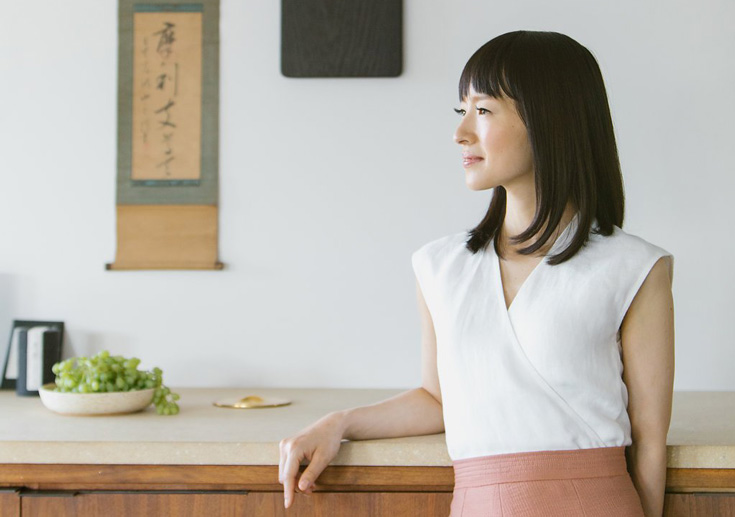 Marie Kondo is the author of “The Life-Changing Magic of Tidying Up,” and stars in Netflix’s “Tidying Up With Marie Kondo.”

I am a tentative Marie Kondo fan. While I don’t fold my shirt into neat rolls or divide my junk drawer into easily identifiable sections, I read The Life-Changing Magic of Tidying Up years ago and thought, “That’s cool.” I threw away a couple of old shirts and sweaters, maybe a few old binders lying around, and that was that.

While I am a Marie Kondo fan, I don’t find her particularly groundbreaking or shocking. This is undoubtably because I spent five years in Japan training as a Zen Buddhist nun. Three of those years I spent living and working in a convent called Aichi Nisodo, sharing a room with five Japanese women. We spent all day cooking, cleaning, sewing, and performing ceremonies.

Reading the discourse, backlash, and backlash to the backlash surrounding Marie Kondo’s methods, it has occurred to me just how little Western people understand about Japanese culture. Because of this ignorance, people fixate upon and exaggerate Kondo’s innocuous suggestions (for example, to keep only 30 books) while overlooking the parts of her philosophy that deviate from the norms of her culture, i.e., the aspects of her practice that are quite groundbreaking.

Marie Kondo has taken the emptiness of Zen and combined it with the fluttering of a childhood crush.

Let’s start with the things about Marie Kondo that are not groundbreaking. First, there is a clear overlap between Marie Kondo’s philosophy and Zen practice. In a Buddhist monastery, cleaning is elevated to a religious art, and most of the day in a Buddhist monastery is devoted to cleaning. In the convent where I trained there were at least five different cleaning rags, each with its own unique function. The zokin was only to be used on the floor, whereas the jokin, combining the character for “pure” and “cloth” was reserved for cleaning sacred spaces such as the altar. A fukin (pronounced FOO-kin) was used for drying hands. Mixing up any of these cloths at any time was blasphemy.

In addition to physical cleanliness, neatness was also paramount. I remember one day hanging some tea towels (chakin, another kind of towel) in a haphazard, crooked way and having a senior nun yell at me. “This is zazen!” she screamed, pointing at the crooked towels (zazen, of course refers to Zen meditation). “You came to Japan to study zazen but you don’t realize that these towels are zazen!”

She had a point. Japanese religion and spirituality has for many centuries focused on the sacredness of inanimate objects. For millenia, Zen practitioners have debated whether objects have buddhanature, the ability to attain enlightenment. As the scholar Fabio Rambelli points out, the Tendai and Shingon schools of Japanese Buddhism argued that non-sentient objects such as nature, the environment, and inanimate objects “exert a salvic influence over sentient beings.” This understanding that inanimate objects hold salvic power spread to Zen and other forms of Japanese Buddhism, and arguably, most of Japanese culture.

Marie Kondo takes up where these Buddhist philosophers left off. She approaches cleaning with the basic understanding that “objects” are more than objects. In the Netflix show, she often has families kneel on the floor and “ask” the house for “permission” or “cooperation” before they clean. She encourages people to say “thank you” to clothes as they fold. Over and over, she treats inanimate objects as living things, speaking to them and communicating with them, and encouraging us all to do the same. In this way, she fits neatly within the conventions of Japanese Buddhism and other forms of indigenous Japanese spirituality.

It’s more interesting to me where Marie Kondo breaks away from tradition. The first way she expands upon tradition is in her explicit suggestion to prioritize joy, or to chose objects that “spark joy.” The word she uses in Japanese, tokimeku, is an intransitive verb that means “to throb” or “to flutter.” Think of the feeling you get when you see your crush, or when you take a turn on a mountain highway and can finally see the ocean. That’s tokimeku.

Japanese Buddhism has not always valued tokimeku. It values emptiness, and space, and decorum, but not throbbing or fluttering. Marie Kondo has taken the emptiness of Zen and combined it with the fluttering of a childhood crush.

The other way I see Marie Kondo deviating from traditional Japanese culture is her relationship to wasting. Japanese culture actually prioritizes not wasting, as opposed to throwing away. Anyone who has lived in Japan has probably encountered the phrase mottainai, which means “don’t waste.” The Japanese phrase mottainai is used to express displeasure about wasting. It can be translated as “Don’t waste!” and it’s used to describe instances of throwing away either tangible or intangible things. For example, when I told a young woman in Japan that I didn’t want to get married, she exclaimed, “You’re young! Mottainai!” Back in the United States, when I lament my declining Japanese skills, people often agree, “Mottainai!” And of course, in Japan, if the nuns and I ever considered throwing away some week-old tub of leftover soup, someone would inevitably utter “Mottainai!” And the soup would end up as part of our dinner or creatively incorporated into another dish.

Marie Kondo doesn’t do mottainai, or if she does, she does it very selectively. She prioritizes emptying out our closets, rather than preserving them. This is obvious if you’ve watched her show or read her books, but it might not be obvious just how radical this is within Japanese society.

When I was getting ready to leave the Buddhist convent, I asked a senior nun how many socks she thought I should take with me. She thought about this for a few seconds.

The nun turned to her friend and repeated my question.

“Four,” the other nun said without pausing.

Zen practice is the living embodiment of the phrase, “Less is more.” This philosophy runs straight through Marie Kondo’s books and shows. It’s important, though, to understand where she fits into a larger tradition, and where she does not. This will help us avoid projecting our own exotification and xenophobia onto her. She is a Japanese woman and as such she is heavily influenced by the culture around her. But she is also her own person, with her own style.

This article originally appeared on Medium.com