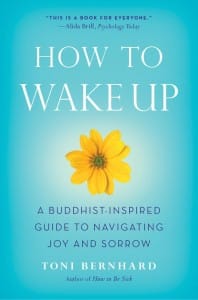 In this excerpt from her new book How To Wake Up: A Buddhist-Inspired Guide to Navigating Joy and Sorrow, Toni Bernhard sheds light on how easily we attach to ideas of ourselves, when these are really nothing more than just that: ideas.

When I was a teenager, I behaved in repeating patterns that society had identified as signs of depression. As a result, I took on that label and that identity: “Toni Bernhard, depressed person.” I thought that “depressed person” was a fixed aspect of my being. But those patterns changed as soon as I moved out of the house to go to college. That notion of an intrinsic, fixed self turned out to be an illusion.

If you’d like to experiment with the ways in which you’ve created fixed identities, make a list of all the words you’ve been using to define yourself. My list includes sick person, hard worker, devoted parent, worrier, perfectionist, author. When you’re done, reflect on each of the identities you’ve written down. Is it a source of joy for you? Suffering? A mixture of the two? Does it carry a judgment, meaning do you think of the identity as “good” or as “bad”? For example, if you listed “overweight” or “easily frustrated,” a negative judgment might have arisen along with your self—characterization. If you listed “highly motivated” or “generous,” you may have noticed a positive judgment arise: “It’s good to be highly motivated”; “I’m proud that I’m generous.”

Now examine the effects of clinging to these identities. When I do this, I notice that the identities that I judge negatively are sources of suffering for me. One example: the identity “sick person.” It’s a source of suffering because it brings along with it stressful thoughts and emotions: “I shouldn’t be sick”; “What if I just get worse and worse?”

However, if I look more deeply at the identity “sick person,” I see that it has no intrinsic existence. There is this body and there is this mind; there are physical sensations and mental sensations. There’s no reason to label either one as the fixed identity “sick.” In fact, there’s a lot this body can do that so-called “not sick” people can do: walk, talk, eat, pet the dog. And so I practice looking at the phrase “sick person” as an abstraction in my mind, with no intrinsic existence. When I do this, I feel a sense of relief and freedom. There’s just this moment—here, now—containing whatever physical and mental sensations I’m experiencing.

The second insight that stands out for me is that the identities on my list—even those I judge as “good”—-make me feel separate from others. And when I look closely, I see that this is also a source of suffering. If I think of myself as highly motivated, I’m separating myself from those whom I perceive not to be. I’ve put myself into an identity box, so to speak, and then feel separated from those who I perceive don’t fit in it. But aren’t highly motivated people sometimes also not motivated?

One reason we seek the “real me” by holding on to these identities is that they provide us with a sense of security. But we know from the law of impermanence that there’s not much security to be found in this life. And so I work on shedding the identities I’ve come to regard as “me” or “mine.” Instead, I try to embrace the insecurity that comes from not being a fixed self at all.

Adapted from How to Wake Up: A Buddhist-Inspired Guide to Navigating Joy and Sorrow, with permission of the book’s publisher, Wisdom Publications.