British writer Stephen Mooney says we need the Beats’ example of resistance to oppressive conformity more than ever. 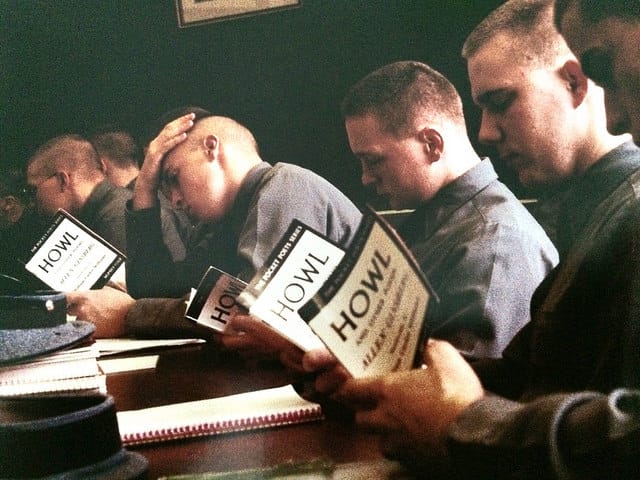 Who were the Beat Generation writers? A grouping certainly, but as Michael Davidson points out in his 1991 examination of mid-century poetics, The San Francisco Renaissance, there was no unified “Beat” picture in play. The San Francisco scene, he writes, was prone to “sectarian rivalries among persons, manifestos, and subgroups within the city.” The poetries and strategies employed by the various groupings of writers were diverse and disparate from the outset.

“Beat” was/is a many-headed thing, rather than a coherent, joined-up, on-message grouping. What united these writers was their resistance to the brutalizing conformity of middle-century America. This is, arguably, of more significance now than ever before. Resistance to normalization is still imperative.

The Beats had the march on consumerism (Burroughs’ Algebra of Need—the addiction of consumption), the development of the mass media as a vehicle for social control, the fear of invasion and nuclear holocaust, and the specter of McCarthyism and the anticommunist witch-hunt of that era.

Today’s escalated world of global capitalism, beauty and body fascism, 24-hour global mass media surveillance, nuclear proliferation, weapons of mass destruction, identity theft, international terrorism, and the rising specter of totalitarianism across what we once used to refer to as the “Free World” (in the UK and U.S. specifically) makes that same struggle against conformism and social control all the more urgent.

I saw the best minds of my generation destroyed by madness, starving,
hysterical naked […]

Ginsberg’s “Howl” is about resistance: resistance to power structures, orthodoxy, and control; a reflection of and on paranoia and its grip in (totalitarian) society; resistance in the teeth of resignation, powerlessness, and a palpable oppression.

Just when it seems these forces have moved beyond our individual and collective control, the disparate Beat writers demonstrate to us some methods, techniques, and sites of resistance to powerful social forces that function, whatever the intent, to subdue, terrorize, and control populations and individuals.

“Howl” juxtaposes the psychotic, the paranoid, and the hysterical with images of mid-century American reality—“hydrogen jukebox” is an often-quoted example—relating the fear of invasion and nuclear holocaust with the technology of the time and the media value of entertainment. These associations are not as easy to ignore as isolated, identified (and pacified?) understandings.
Ginsberg elsewhere identifies, as pointed out by Eric Mottram in his insightful 1972 essay “Allen Ginsberg in the Sixties,” that, in relation to politics and personal survival in poetry:

Finally it becomes too much to fight. But the stakes are too great
to lose—the possession of one’s feelings intact.

The Beat writers do not offer us neat solutions or counteractions to overwhelming odds, but rather, perhaps, a sense of the urgency in the struggle against conformism and the totalitarian impulses in society, as well as the encouragement to so struggle.

Gary Snyder wrote in 1969 in Buddhism and the Coming Revolution, “No one today can afford to be innocent, or indulge himself in ignorance of the nature of contemporary governments, politics and social orders.”

Political and eco-awareness as strategies for locating and valuing resistance. Likewise, spirituality partially assumes this role for many of the Beat writers.

Michael McClure’s relation of the organism to its environment, and his idea of “Revolt” (from his Meat Science Essays) locate the site of resistance in the “bodily” aspect of the individual that the filmmaker Stan Brakhage also employs in his resistance to the normalization of vision that mainstream cinema has become.

Burroughs’ deliberate adoption of paranoia, countering the social paranoia of 1950s America; di Prima’s breaking of certain regularities of male language; Kerouac’s mythologizing and mobility of expression; Waldman’s notion of alternative community—these and other demonstrations of sites of opposition remind us now to stop fiddling with our mobile phones, to tune out the homogenizing mediocrity of “entertainment,” and to refuse to relinquish our belief in opposition and resistance in the face of the seemingly unstoppable momentum of social oppression.

Stephen Mooney is a poet who lives in London. He is part of the Contemporary Poetics Research Centre at the University of London and a member of the performative poetry group “London Under Construction.”