Khin Mai Aung once worried her children would pick up dogmatic views from her husband’s Catholic faith. Now, she struggles to explain to them the terrible violence in her country of birth — incited by members of her own faith. 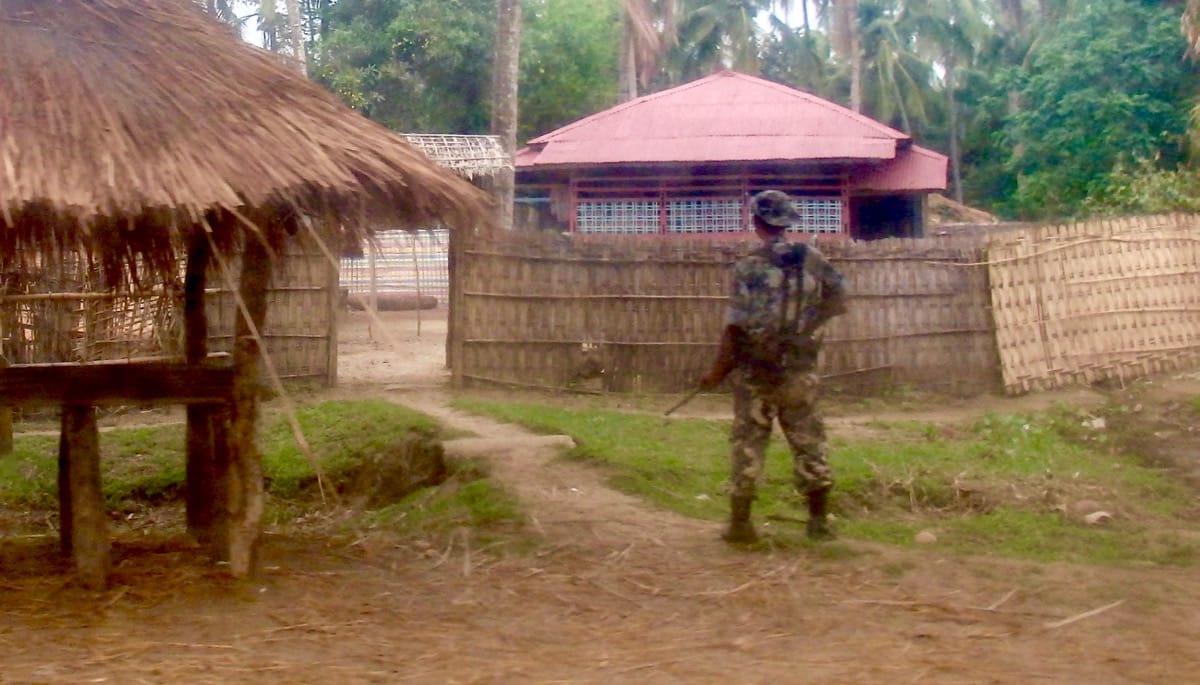 I’m Buddhist. My husband is Catholic. Our religious differences created some tension early in our marriage — mostly because I fretted about our future children’s religious upbringing. We’re not terribly religious, but both of us derive a sense of community, culture, and morality from religion, and we wanted to expose our children to both of our faiths.

I worried they would become Catholic by default, due to the prevalence of Christian traditions and holidays in American culture. Christianity is the religious background of over two-thirds of Americans. By contrast, less than 1% of our population is Buddhist, and many fewer still are Theravada Buddhists.

When we married, I assumed Catholicism was rigid and inflexible. I feared it was less tolerant of other religions, as compared to my faith. After all, a Catholic must accept God as one’s savior and creator and renounce all other religions. By contrast, I thought of Buddhism as inherently open and accepting. Due to the flexibility of Buddhism’s core tenets, I believed our religion to be innately tolerant.

Recent events in Myanmar, my country of birth, have dramatically proven me wrong. A radical strain of Buddhism has reared its ugly head in the country, preaching intolerance and hate and even justifying the killing of non-Buddhists. An epic humanitarian crisis is unfolding in Myanmar, with over 600,000 members of the Muslim Rohingya minority group fleeing persecution by the country’s repressive military. 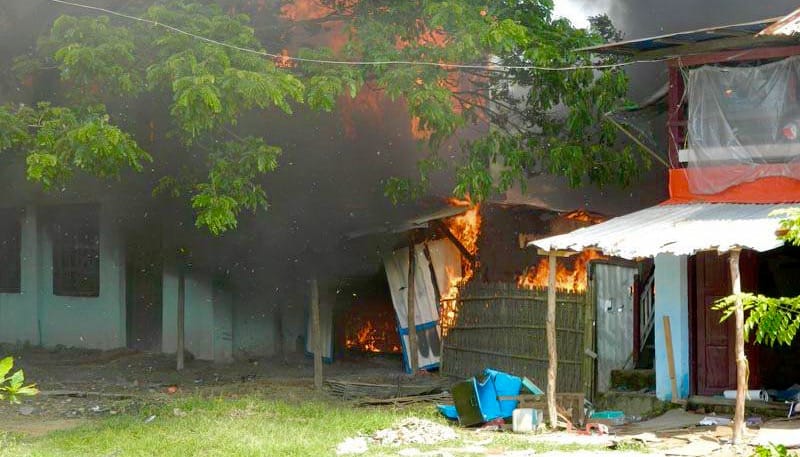 A house burning in Rakhine.

While the extremist Buddhist views are not representative of most of Myanmar’s Buddhist clergy, radical monks still garner support for oppressive military action among the majority Buddhist population. By contrast, the Catholic pontiff, Pope Francis, has historically been a strong advocate for tolerance and the rights of the oppressed, including the Rohingya (despite missed opportunities to go further). Until recently, the highest-ranking Catholic clergyman in Myanmar also spoke out in defense of the Rohingya.

Through my horror and shame at radical Buddhist currents in Myanmar, Burmese Buddhism is the bedrock of my religious and moral upbringing.

Previously, I didn’t fully appreciate how Burmese Buddhism – like other organized religions – is more than a spiritual institution; it is also a political one. Myanmar is almost 90% Theravada Buddhist, and the sangha is a powerful player in the Burmese state. Monks are human beings with the ability to either challenge the prevailing social order (as they did in the 2007 Saffron Revolution) or to reinforce it (as hardline monks in nationalist Buddhist organization Ma Ba Tha are doing now). Our faith, like other organized religions, can be twisted by political forces and bad actors to support exclusion and persecution instead of inclusion and tolerance. 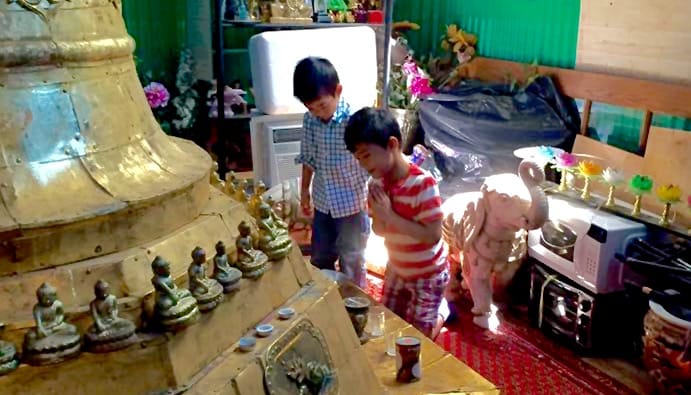 The author’s son (right) and a friend (left) in a Theravada temple in Brooklyn, NY. Photo by the author.

Despite this, I remain committed to Theravada Buddhism. Through my horror and shame at radical Buddhist currents in Myanmar, Burmese Buddhism is the bedrock of my religious and moral upbringing. The practice of mindfulness has brought me calm during this challenging time. I also believe in karmic retribution. As soldiers and monks attempt to dehumanize the Rohingya, some of their own humanity is lost. If nothing else, they will repay their karmic debt through the hate and anger that eats at their wellbeing, creating further suffering and pain, or dukkha.

Now, a decade into my marriage, I’m again pondering my children’s religious upbringing. My husband and I have three young kids. What do I teach them about these disturbing developments? So far, we’ve smoothly navigated interfaith child rearing. We attend both church and temple services on special occasions and we conduct a “Sunday homeschool,” where we share fables, stories, and lessons from Buddhism and Catholicism. Sometimes I practice meditation with them. As they get older, we plan to teach them the critical role of religion as a social and political force that can be used for both liberation and oppression. Our approach might not yield a household of either Buddhists or Catholics, per se, but I hope my kids’ pluralistic upbringing will familiarize them with mine and my husbands’ beliefs, cultures, and traditions — and also instill in them tolerance and a truly inclusive sense of religion.