What is love? That’s a tough question to answer. Perhaps, suggests Charles Spearin, we might do well to ask what it isn’t. 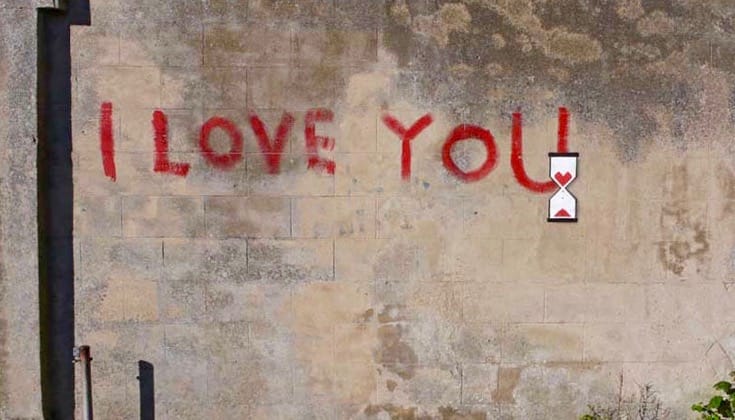 Now, that may be a strange thing to be hearing from a website, but it seems to be what an awful lot of people long to hear. So maybe just seeing it innocently appear on a screen is enough to cheer someone up for a few seconds before starting the day. That’s what I hope, anyway.

It’s a funny thing that people attach emotional heft to such a small collection of syllables. It doesn’t seem appropriate to empower the tongue with such responsibilities. If you were to take the meaning of the sounds “I” and “love” and” you” and apply them to a whole new collection of sounds — for example, “pass the cheese” or “has anybody seen the stapler?” — the world would suddenly become a very strange, though wonderful, place.

I spent one August at a Buddhist monastery in Nova Scotia where I attended the Nitartha Institute. Still in its infancy then, the institute offered an annual, month-long intensive study of Buddhist thinking, logic (called Lorig) and debate, covering various philosophical schools of the past 2,500 years.

Many of the course’s key texts were still in the process of being translated into English for the first time. So, with three Tibetan debate masters and an expert team of translators present, the classes had a definite air of excitement to them—as though we were opening an ancient treasure chest.

While there, I was challenged to set aside my conventional understanding of language and thoroughly examine what is called the Science of Sound — which includes language and grammar. We covered every conceptual linguistic division of reality you could shake a stick at. I was standing under a waterfall of information, with only a teacup to take home.

However, one of the ideas I did manage to bring home with me was the concept of an isolate. An isolate is a conceptual label. For example, “flower” is a label that isolates the concept of a flower from everything that is not a flower. When you think “flower,” you have no specific referent object; there is no such thing as a generic “flower,” only the exclusion of everything else.

That is to say, a flower is not a bicycle, not an alarm clock, not an angel, not a politician, not an ocean, nor is it anything else that is not a flower. A flower is a conceptual distinction. Period. (A rose is a rose is everything that is not not a rose)

According to the Lorig, the way people decide what is a flower is by determining the function of the object. The mind seems to put a lot of emphasis on function. If, for example, someone asks you if you have a watch, and you do, regardless of what make or color it is, you’ll answer “yes.”

So a flower is the thing which does, in every way, what a flower is supposed to do. Easy enough.

But what about love?

…What the hell does that mean?

Perhaps we should start with “I.” Such a harmless little sound. And, written down, it’s nothing but a simple scratch of ink. But what does it really refer to?

That wasn’t so hard. But what is I? What functions as I? Well, without going into thousands of years of philo-sophistry, and what Descartes said to whom about what, it can be narrowed down to five basic piles. The five heaps of me.

(This is a simplified version of a traditional Buddhist means of examining the self called the five skandhas.)

Of course there are many, many complicated facets within each of these piles, but superficially this is what functions as I.

Which brings us to love.

Ah, love. How many poems have been written about the meaning of love? What is it? I feel as if I should be holding a rose or gazing at a photo of a beautiful woman when I ask that question.

Well, I hate to say it, but the obvious answer is: love is whatever is not not love. (Poets everywhere are cringing.)

As to what functions as love, I can’t say. I won’t even try. Everyone has their own individual qualifications for the word love and those qualifications are as varied and as flexible as the tongues that say it.

The point is when you take the five heaps of I, combine them with the equally (if not more) convoluted five heaps of you, and say that they are related by something as abstract and as individual as love, the meaning of this popular little sentence becomes about as clear as chocolate.

So, once in a while, I think it could be worthwhile to disempower those three little syllables. If you long to hear them, say them to yourself a few dozen times until all you hear is unrelated vowels and consonants. Try saying things like “aye luv you” or “isle of Ewe” or things like that, until all traces of meaning has vanished from the sound coming out of your mouth.

Then, make the one you love a nice pasta dinner, with candles, soft music, and nothing in the world to distract you from each other. Evoke that feeling in your chest, feel the lump in your throat.

And when your lover looks you deep in the eyes, clears her throat and says, “pass the cheese,” you can smile.

Because the world is a strange and wonderful place.

Charles Spearin is a musician and a founder of Broken Social Scene and Do Make Say Think. He lives in Toronto.