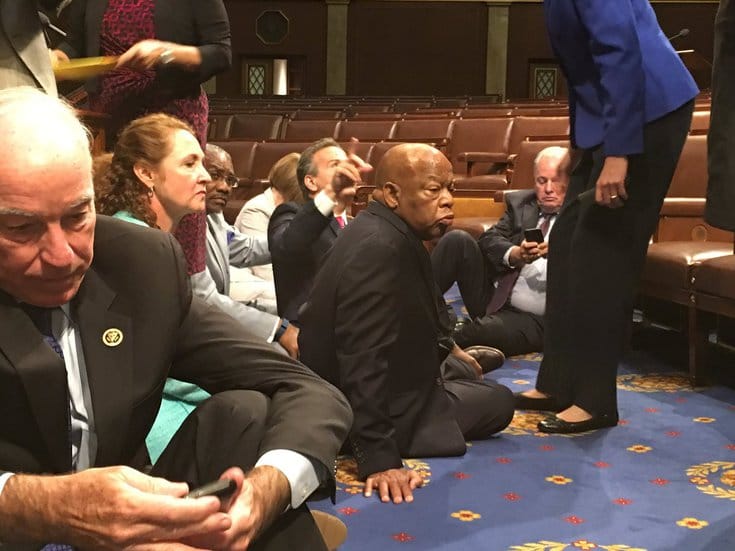 For more than 24 hours, Democratic members of the U.S. House of Representatives engaged in a historic sit-in to demand that the Republican majority hold a vote on gun control measures before the July 4 recess. While that didn’t happen, Democrats continued to  hold the floor through early this afternoon, making the case for gun control legislation via live social media feeds, a workaround made necessary when House leadership turned off the C-SPAN cameras that ordinarily document the chamber’s workings.

The House Democrats’ #NoBillNoBreak action came on the heels of an almost 15-hour U.S. Senate filibuster pushing gun control measures, and a surge of anguished public demands to move from words to action. In the words of The Late Show’s Stephen Colbert, “To love means to do something.”

I could not agree more. But as someone who works in the world of words, expanding the presence of women’s and other under-represented voices in the public arena—I also find myself grappling with the question of how. How can we make our words count—and do so in a way that is true to our deepest values?

This question has particular urgency for me as I prepare to lead “Beyond Walls,” an interfaith program aimed at helping members of diverse clergies reach wider audiences with their words and ideas. My own spirituality is eclectic—my childhood Sunday School Christianity having long since blossomed into a deep appreciation for all faiths with a commitment to tolerance and love. One of these is Buddhism, and like so many spiritual eclectics, I’ve spent my share of time in meditation halls, exploring a religion that has as one of its central teachings the notion of “right speech.”

If you propose to speak, always ask yourself, is it true, is it necessary, is it kind? These words are widely attributed to the Buddha and pretty much in line with Buddhist teachings as I’ve come to understand them. Interestingly, however, the precise phrasing appears to be not from The Buddha but rather the title of a Victorian poem by one Mary Ann Pietzker, published in 1872. (“Oh! Stay, dear child, one moment stay/ Before a word you speak . . .”)

I mention this bit of trivia to make the point that Buddhist teachings on right speech are not unique to Buddhism but also deeply ingrained in our larger culture. “Be kind.” “Tell the truth.” These are familiar exhortations—the terrain of manners as well as morals. But do they really translate to today’s realities? How to respond when anger and lies appear to be so key in propelling a candidate towards the U.S. presidency, when the fastest way to impact often appears to be through fanning emotions?

A core tenet of the “Write to Change the World” seminars I teach through the nonprofit OpEd Project is that we seek to change minds through true facts, through evidence-based arguments—and that the most powerful arguments are grounded in empathy and respect for opposing viewpoints. These are, to my mind, beautiful teachings, in line with Buddhist notions of right speech as well as traditional norms. But are they commensurate to the Age of Rage?

Ultimately, the answer for me is — must be, even — Yes. Implicit in this response is a conviction that speaking truth, grounding our arguments in facts, is fundamental to democracy — you might call it the rhetorical equivalent of the rule of law. It is at the heart of who I want to be and the kind of world that I want to inhabit and leave to future generations.

As for kindness—empathy and respect—they are strategies as well as values. How often have you been persuaded to change your mind by someone angrily shouting at you (or by the virtual equivalent)? If our goal is to change minds, we need to speak in ways that make it easy for people to listen. We know from research as well as personal experience that simply being “right” is rarely enough. Rather, we are well-served by recognizing that an argument is necessarily a partnership where, in the words of Julia Galef, “you together are trying to figure out the right answer.” Also helpful: powerful examples, real human stories, a lesson that House Democrats have clearly taken to heart.

Let’s be clear: Kindness does not mean passively sitting by in the presence of hatred, violence, or injustice. Quite to the contrary. Buddhist teacher Sharon Salzberg tells a story about a terrifying encounter in Calcutta, when she was grabbed out of a rickshaw in a dark alley. Her teacher’s response when, still shaken, she later described the incident: “Oh Sharon, with all the loving-kindness in your heart, you should have taken your umbrella and hit that man over the head with it!” It’s all about intention: Don’t strike out with the primary intention of doing harm. Do take wise action to protect (whether yourself or others).

As House Democrats so clearly demonstrated, words are not something apart from action – they are both action in themselves and a pathway to real-world change. It’s long been said that the pen is mightier than the sword. Will the (virtual) pen prove mightier than the Sig Sauer MCX or the AR-15? That remains to be seen.

A version of this piece appeared also at The Byline Blog.

Amy Gutman is a writer, editor, and senior facilitator for The OpEd Project. She lives in the Boston area.