NBC’s hit comedy series, “The Good Place,” which returns tonight, offers a refreshingly sharp and real approach to the great matter of life and death. 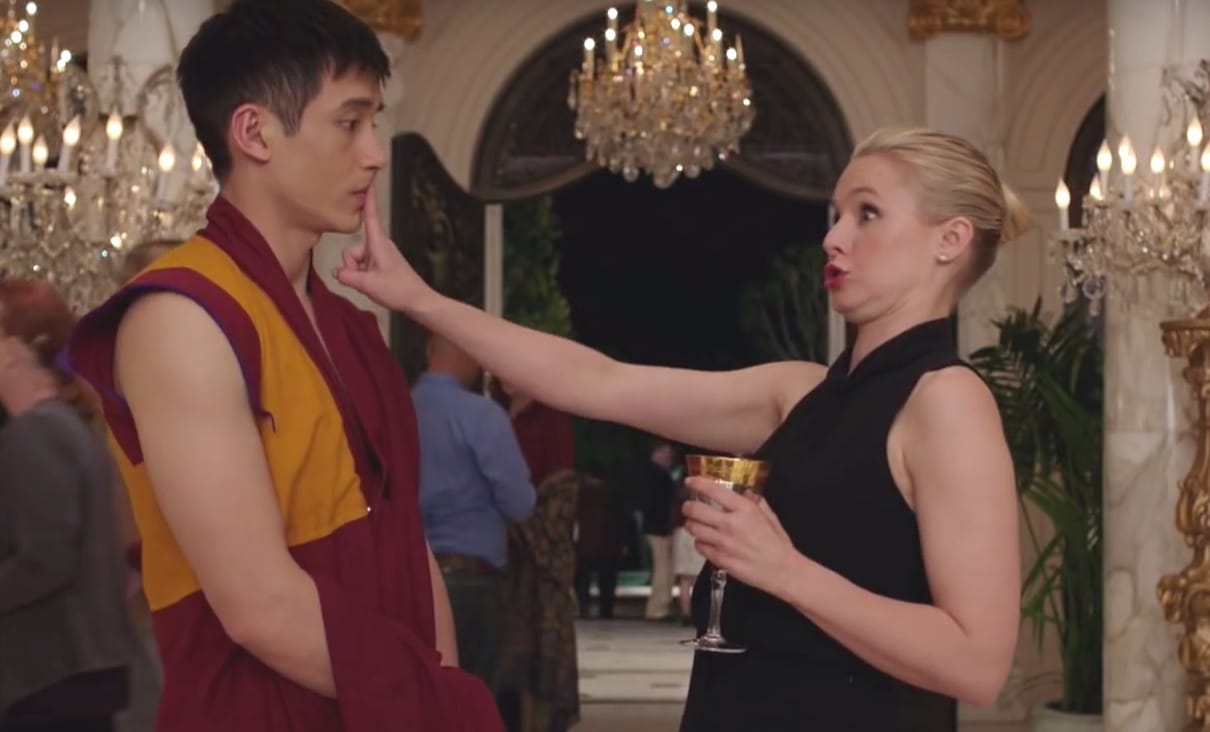 Manny Jacinto and Kristen Bell are fakin’ it ’til they make it in The Good Place.

NBC’s  hit comedy series, The Good Place, has quite the pedigree. It stars Kristen Bell and Ted Danson (and a whole host of perhaps lesser known but very likeable talents), was created by Michael Schur — who was instrumental in the success of Parks and Recreation, Brooklyn Nine-Nine, and the American version of The Office — and features formidable writers like Joe Mande, Aisha Muharrar, and Schur himself. So you pretty much know: it’s going to be funny.

What you might not expect from the show is its depth, and more so, its sense of dharma. The Good Place may count an ersatz Buddhist monk among its characters, but this fantastical show’s approach to the great matter of life and death — though played for laughs — is refreshingly sharp and real.

Not to spoil too much, but (spoilers ahead) here’s the basic story: Eleanor Shellstrop (Bell) is dead, and worse: she seems to have been a not-very-good person. Despite the latter fact, Eleanor finds herself in “The Good Place” — a utopian community where only humanity’s altruistic cream of the crop go after they’ve breathed their last mortal breaths. Seems she’s been mistaken for a very good person, but if she’s found out, Eleanor will lose her standing in the bright-n-shiny afterlife Good Place community, and be relocated to “The Bad Place.” With so much to lose, Eleanor is desperate to rise above her normal behaviors so she can stick around for a peaceful and happy eternity.

She’s not the only one. The aforementioned Buddhist monk has a similar predicament: though he’s introduced to us as “Jianyu Li,” he was really Jason — a DJ and drug dealer who’s also somehow ended up in The Good Place. (His silence, we’re told, is due to a vow he’s taken: in reality, he’s just using that ruse to keep from blowing his own cover.) Jason (Manny Jacinto) is actually so fake, and so base a thinker, that he makes Eleanor look pretty good by comparison.

What’s not so fake here, though, is the show’s approach to what makes for a better and more meaningful existence. Thanks to her house- and soul-mate Chidi — residents of The Good Place are assigned eternal soulmates, though like everything else for Eleanor in the afterlife, hers is a mismatch — we get to see Eleanor start to come around. Chidi, played by William Jackson Harper, was an intellectual ethics professor before he died, and in his wisdom and patience puts up with Eleanor, Jason, and their secrets, feeling an ethical obligation to help them. He explains “dharma” and various other philosophical ideas, trying to cajole his charges to follow through on doing the right thing. There’s a real joy in those moments when it dawns on Eleanor that she can do the right thing, and that it feels good.

(And when she doesn’t? Suffice to say: all hell breaks loose, and it’s a lot of fun.)

To be clear, The Good Place is in no way trying to push “Buddhism” on its viewers. As Schur has told The Hollywood Reporter, “It is very important to make clear in the first 30 seconds of the pilot, this is not one religion’s concept of the afterlife […] I realized it’s about versions of ethical behavior, not religious salvation. The show isn’t taking a side, the people who are there are from every country and religion.” So, this isn’t some kind of spiritual propaganda. But if you wish more of our mass-culture would celebrate values like compassion, altruism, and accountability — but without that saccharine taste — The Good Place is a solid step in the right direction, and a forkin’ good time. (See the trailer below for more on that one.)

The Good Place returns to TV on Thursday night, January 5. To catch up with the show, you can check your local listings, or try here to watch online on your on schedule. While you’re there, you might also want to check out The Good Place‘s collection of viewers’ “Do-Good” messages and videos.