Iliana: A Winter Solstice Tale is the story of a little girl who lives with her family in the kingdom of Shambhala. 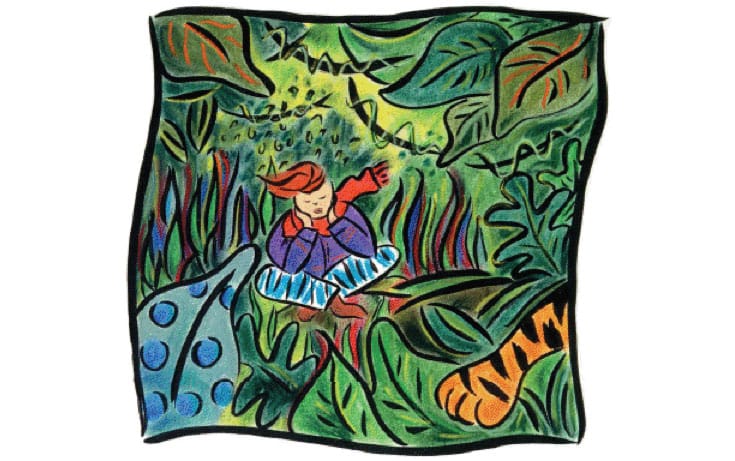 The days start growing shorter and shorter, and people become afraid that they’ll lose the sun forever. Iliana sets off alone to find it, and along her journey, she meets magical friends and ends up learning more than she ever imagined.

Written by Walter Fordham and illustrated by Tatjana Krizmanic to tell the story behind the Shambhala community’s Children’s Day celebrations, the book was first published in 1995 and has now been reissued — click here for more information. We’re pleased to share an excerpt from Iliana:

After she had walked for a long time, Iliana began to notice that the snow was getting thinner and the air seemed warm. She could see that the path was leading her into a deep valley. Soon the snow was gone altogether, and she was walking downhill along a muddy trail, until at last she came to the valley floor. There she stood at the edge of a dark jungle. The smells of summer were in the air, and she felt hot and awkward in her winter clothes. There was something about this place that she did not like. It had interrupted her journey. “I must get through this valley as quickly as possible,” she said aloud, and she began to run into the dark jungle ahead. But suddenly, a tree root caught her foot and sent her flying to the ground. As the pale light of dawn spread through the jungle, she found herself sitting in a small clearing. The dark shapes of the surrounding trees loomed above her. She felt very small.

Everything was so still. Where was she? Where was the path? Alone and scared, Iliana began to cry. But a flash of light interrupted her tears. She held her breath, stayed very still, and waited. It happened again—a sudden burst of lightning without thunder. But in the distance … what was that sound? Someone was singing a soft and steady song. She could not hear the words at first, but after a time she heard a voice singing:

The song was steady like the beating of a drum. “Could there really be a tiger?” Afraid to cry and afraid to run, Iliana watched as a huge orange tiger with black stripes stepped into the half-light of the clearing. It walked towards her, moving as gracefully as a leaf carried on a breeze, each paw touching the earth gently as it sang:

Would the tiger eat her? It was too late to run. As she listened to the tiger’s song and watched its gentle movements, she began to relax. She wished that she could walk like that.

I roam on the earth
And all through the night,
With smiles along my back
I fill the sky with light

Now, one of the tiger’s stripes began to glow. With a sudden burst of sparks, it leapt from its back, and flashed like lightning in the sky. The tiger sang:

I am the tiger

IIliana wasn’t afraid any more. It seemed that the tiger wanted to help her. She got up and started to walk along behind it. She tried to make her movements like the tiger’s movements. But the harder she tried, the more clumsy and awkward she felt. How did it walk so steadily and gracefully? Just then the tiger sang:

Iliana tried it. She raised one leg, and slowly took a step. Then she lifted the other leg and stepped forward. She moved one leg and then the next until she was walking slowly behind the tiger. “Step. Step. Step,” she said under her breath. She was moving along faster now. “Step. Step. Step.” Soon she was gliding along, just like the tiger. 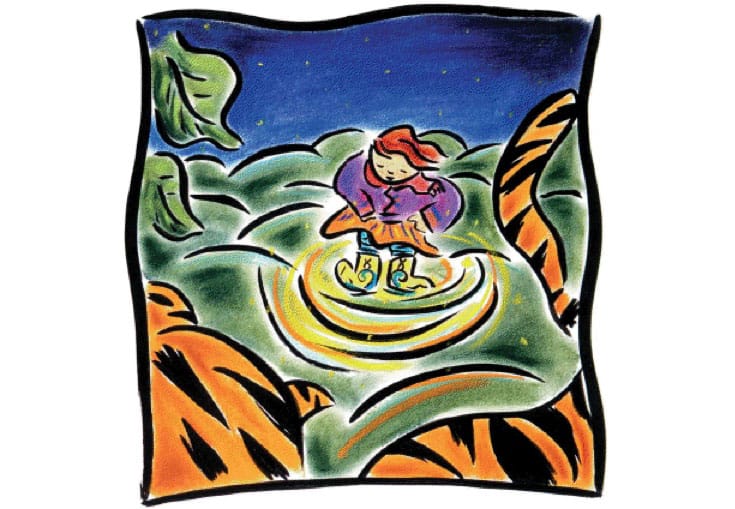 The more carefully she stepped, the faster she moved. But when she started to enjoy the going-fast part and forgot about the stepping part, she would stumble and fall. Then she would pick herself up and start all over again—stepping slowly, gently—until once again she was gliding along behind the tiger. In the growing light of day, Iliana saw that she was once again walking along the path. Now and then, one of the tiger’s stripes—first one near its tail, then one along its back—would leap into the air with a flash of light. When she had walked for a long time without stumbling or tripping, the tiger sang:

As the tiger sang, one of its stripes began to sparkle and glow. It leapt from its back and circled Iliana’s feet. Down she looked, and what did she see? New boots! Boots like the armored boots of the king’s soldiers! These boots were strong and soft all at once—so strong that nothing could harm them, so soft that she could easily feel the earth beneath her feet. When Iliana looked up, the tiger was gone. She turned and continued on her way, walking with a tiger’s walk through the jungle. A steep hill loomed ahead. As she climbed up and up, the jungle grew thinner, the air became cooler, and after a time she was walking in the snow again. At the top of the hill she found fields of snow as vast as the ocean under a brilliant blue and cloudless sky. Looking back, all she could see was a dense fog, and if she had not known that the valley was there, she would not have guessed it now. She turned and set out eastward over the snow.