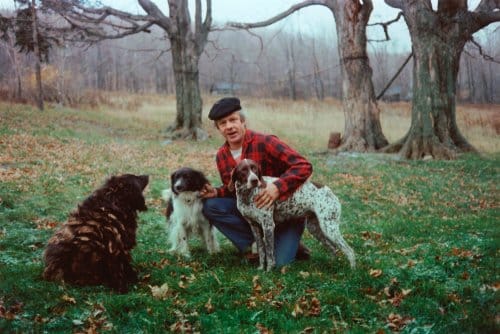 Saxifrage is my flower that splits the rocks
— William Carlos Williams

The night I met Allen Ginsberg in 1976, his lifelong companion Peter Orlovsky raised a handkerchief to Allen’s nose a fraction of a second before he sneezed. We were in a basement club in Greenwich Village commemorating the death of Neal Cassady, one of Allen’s great loves, and the muse of Jack Kerouac’s novel On the Road. The poet had a bad cold, and it was his second reading of the night.

Anticipating Allen’s need for a handkerchief was just one way Peter manifested what photographer Elsa Dorfman called his “unearthly sensitivity and caring” in an email to a friend after Peter died last Sunday. Kids, animals, and growing things adored Peter. Just before writing “Howl,” Allen pledged his love to him, recognizing in him a character out of a Russian novel: the saintly shepherd, a holy innocent. In Foster’s cafeteria in San Francisco in 1955, the two men grasped hands and vowed never to go to heaven unless the other could get in — a true marriage of souls. “At that instant we looked into each other’s eyes,” Allen wrote, “and there was a kind of celestial cold fire that crept over us and blazed up and illuminated the entire cafeteria and made it an eternal place.”

At Allen’s urging, Peter also became a poet. In 1978, City Lights published a collection of his work with the memorable title Clean Asshole Poems and Smiling Vegetable Songs. (The vegetables were those Peter grew with tireless enthusiasm on the couple’s organic farm in Cherry Valley, New York, bought as a respite from the grit and druggy temptations of their neighborhood on the Lower East Side.) While no one would have compared Peter’s creative output to Allen’s, his poems – sometimes only a single line – could be remarkably pure and surprising, even luminous.

Poet Thom Gunn once told me that the 19th century British poet and artist William Blake – whom Ginsberg took as his first guru — had written in the voice of an aggrieved adult child, a grown man who saw the suffering of the world free of the blinders of conventional wisdom and dull maturity. That was Peter, too, responding empathetically to every sentient being around him, from a starving leper on the streets of Benares to a pig with a broken jaw at the farm. Even Peter’s idiosyncratic spelling (his first poem was published with the title “Frist Poem”) insisted on its own untrammeled vitality; his poems were like goofy, glorious weeds flowering in the cracks of official “poetic” language.

My heart is always not in the right place

A few months after the reading in the Village, I became one of Allen’s apprentices in the Jack Kerouac School of Disembodied Poetics at Naropa Institute in Boulder, Colorado. Other writer-heroes of mine, like William Burroughs and Gregory Corso, taught there too, as did Buddhist teachers like Jack Kornfield and Taizan Maezumi-roshi, founder of the Los Angeles Zen Center, who showed me how to meditate. It was Allen’s belief that the best education came not from niggling over line breaks and metaphors in airless workshops, but from living with poets and seeing how their minds worked in ordinary situations. (In an old Hasidic folktale, a young man says he is making a pilgrimage to a renowned rabbi not to discuss Torah, but to watch him tie his bootlaces.)

One virtue of this approach was that seeing a world-famous poet in his underwear in the morning, turning the pages of The New York Times, tended to strip one of exalted illusions. These Beat Generation icons sweated, gossiped, got crabby about the littlest things, schlepped to the supermarket (except when they had me do it), made clumsy passes at sexy young poets, and had enormous and very fragile egos. In short, they were a mess, but as my Buddhist poet friend Marc Olmsted puts it in his best Burroughsian drawl, “It’s Samsara, my dear, we’re all a mess.”

Yet they got it done — the Real Work of making poems, building community, and encouraging each other to be honest, conscious, and awake to the fierce beauty of every passing moment, every breath. At Naropa, life, art, and Buddhist practice were indistinguishable. That was the point.

That said, when I started coming to Allen’s townhouse apartment in the mornings to transcribe his notebooks, I was a little shocked to find Peter snoring on the couch as some handsome aspiring Beat strolled down from the master bedroom in a towel. It was only years later that I fully understood the intricacies of Allen’s and Peter’s arrangement. Though they were the first gay male couple that many people had ever heard of, Peter wasn’t, in any strict sense, gay. He was more physically attracted to women, and responded to them in ways that Allen couldn’t. They both had other lovers on the side. So why had Peter virtually married Allen?

Because they adored one another. They were soul brothers, beyond categories. Their love and mutual devotion was another weed that flourished in the cracks – an impossible happiness.
. 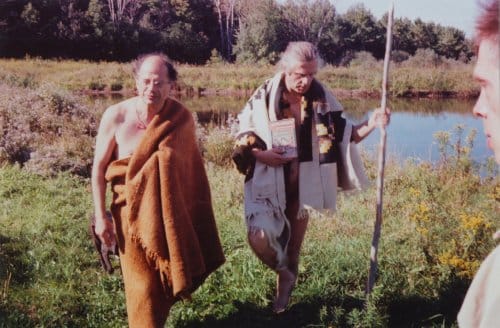 Not that the impossible is easy. My first summer at Naropa, Peter was in marvelous shape. He was tanned and muscular from working on the farm, meditating a lot, and eating healthily. (Like Allen, he touted the life-saving virtues of whatever latest food kick he was on, from bee pollen to macrobiotics. On a typical morning at the farm in 1979, he told the young poet Cliff Fyman, “Molasses makes you shit good and feel at one with the universe and natural earth cycle!”) Best of all, Peter wasn’t drinking or on hard drugs that summer. He glowed. Ever willing to help, he chauffeured famous poets, musicians, and gurus around Boulder, kept the townhouse spotless, and provided a buffer for Allen, who was shorter-tempered than usual, perhaps because his father Louis had died just a few months before. Peter kept a benevolent eye on the scruffy members of Allen’s inner circle even when Allen was too busy being legendary to do so. The day I told Peter that I was going to San Francisco for the first time, he patted 19-year-old me on the head and said, “Oooh, don’t get in trouble.”

Peter knew from trouble. Growing up on Long Island, the Orlovskys had been so poor they lived in a chicken coop. Peter’s mother, brothers, and sister spent most of their lives in institutions, struggling with schizophrenia, mental retardation, and other conditions. His mother Kate had been struck deaf and partially paralyzed in a botched operation by a drunk doctor. No wonder Peter grew into a young man attuned to the suffering of others. When Allen met him in 1954, Peter had been honorably discharged from the Army – where he worked as an ambulance driver — for telling a psychiatrist, “An army with guns is an army against love.” Photographs of Peter with his family are heart-wrenching: the holy innocent in a charnel ground.
. 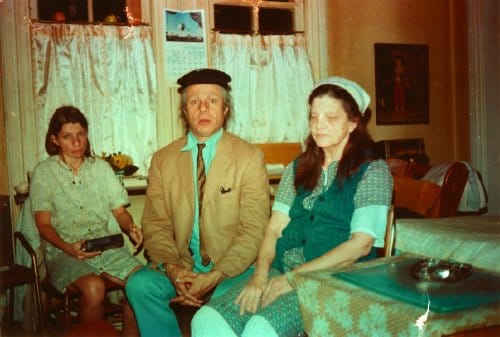 Together Peter and Allen traveled all over, sowing seeds of poetry, tenderness, public candor, and American Buddhism worldwide. They hung out with Burroughs in Tangier, smoked ganja and contemplated burning corpses in ghats along the Ganges, wrote Charlie Chaplin a fan letter from Benares, and visited the young Dalai Lama in Dharamsala. They also meditated side-by-side on railroad tracks in Denver to block a delivery of radioactive material to the leak-prone Rocky Flats nuclear power plant. Often, a reading by Allen at some illustrious academic institution would feature Peter unselfconsciously yodeling away with a banjo about the joys of shoveling shit on their farm.

Hay Rassberrys with your little red hat on
How we love to pick you in the early morning light
Never will I forget how sweet you are!
. 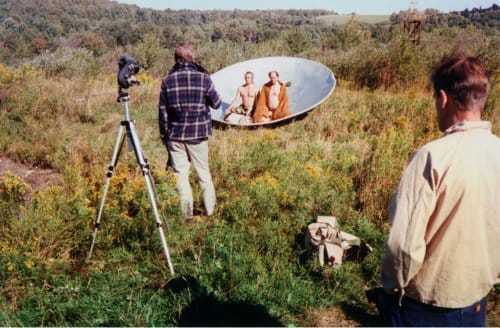 Alas, when I returned to Naropa in 1987 to be Allen’s teaching assistant, it was Peter who had gotten into trouble. He was using heavy drugs, getting angry a lot, and got into a drunken brawl with British psychologist R.D. Laing that resulted in 60-year-old Allen bruising his knee and tailbone, and fracturing his pinky, when the police accidentally shoved him to the ground. (“The sidewalk reared up and whacked me on the ass!” Allen told their friends.)

Peter’s genes were stacked against him. His last years with Allen were difficult, as his drug and drinking problems, aggravated by bouts of psychosis, got the upper hand. On the advice of singer Marianne Faithfull, Allen and Peter sought the help of a 12-step program. There, Allen came to understand the ways that he had unconsciously encouraged Peter’s dependence on him. They even officially separated for a time, while Peter continued to have girlfriends. But Allen made sure that his old buddy always had a roof over his head.

When Allen drew his last breaths after midnight on April 5, 1997, Peter was beside him. “Goodbye, darling,” he said, kissing the poet’s head just before the moment of death, making good on his vow.

The last time I saw Peter was shortly after that, at an auction of Allen’s shirts, photographs, and other personal effects at Sotheby’s in New York City. The blue-haired ladies taking names at the door looked wary of the bearded stranger claiming to be on the guest list. “Well, who are you?” one of them finally asked. “I’m Mrs. Allen Ginsberg!” Peter roared. They let him in.

And Allen made good on his vow to Peter as well. Money from the Ginsberg Trust helped Peter escape the city and buy a modest house in St. Johnsbury, Vermont. There, Chuck and Judy Lief, senior students of Allen’s Buddhist teacher, the Vidyadhara Chogyam Trungpa Rinpoche, cared for him in his last years, with the help of other member of the Shambhala sangha.

Peter died of lung cancer at the Vermont Respite House in Williston on Sunday morning, May 30, 2010, surrounded by old friends like poet Anne Waldman, co-founder of the Jack Kerouac School. Chuck wrote to me shortly after Peter died:

Despite becoming more and more reliant on oxygen, Peter was a dedicated member of the small St. Johnsbury meditation center, and a frequent participant at celebrations and major events at Karme Choling. He had a meditation instructor, and looked forward to getting copies of each new book of the Vidyadhara’s teachings as they were published. He enjoyed receiving letters and calls from old friends. Even though he did not write in the later years, Peter noticed everything going on around him, using the poet’s mind which Allen found so naturally present.

Goodbye little Peter, gentle Peter. Never will I forget how sweet you were.
. 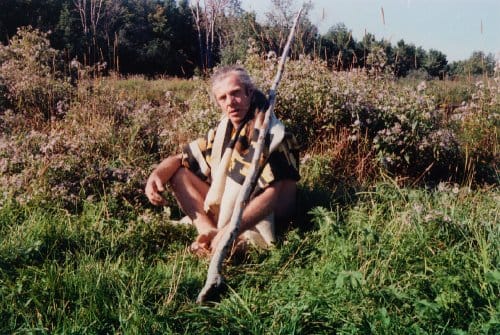