“If the U.S. is like a burning manor, with echoes screaming of majority entitlements, the disregard for Black people, and the state of inequality, can we say that this country follows the love of the Buddha?” asks Johnny Edward Dean Jr. 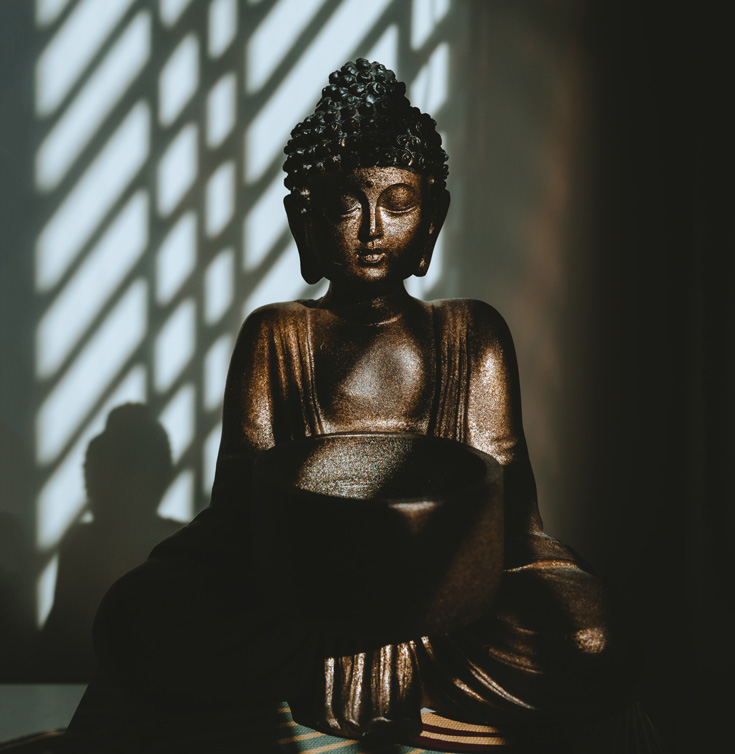 “I want to suggest this: that the majority for which everyone is seeking which must reassess and release us from our past and deal with the present and create standards worthy of what a man [or any gender] may be — this majority is you.”

-James Baldwin, “In Search of a Majority: An Address”

The powerful Black author and activist James Baldwin’s address in search of the “majority” concept illustrates how globalization and white supremacy problematize a common American identity that lacks inclusion and equality in lieu of a call and response. Built upon the African tradition, this issue has inspired me to write this address to my fellow Buddhist practitioners, asking a related question: Is there true equality in the Buddha Dharma? Baldwin’s majority includes all of us. Likewise, I seek to know if the concept “Buddhist” is capable to include those who seek the teachings and the love of the Buddha regardless of differences.

What must we do now? Continue to aspire towards equality as bodhisattvas.

Equality is a fundamental value. It is what many African Americans, like myself, look forward to in the future because it does not exist — but we think it is achievable. The beginning of 2020 started with significant events that shook us in more ways than one. An epoch of events from the financial crisis, global warming, and the spread of Covid-19 has led us to see that we are all vulnerable regardless of our differences.

We each have within us a quintessential commonality, that is, a desire to be loved, that when recognized and brought to bear, can unify us when faced with despair and turmoil. The seismic shift between the Obama and Trump Administrations felt as if majority aspiring consciousness excluded the majority of Americans, including African Americans. Even now, it feels as if being Black makes one particularly vulnerable to being ignored, even though there is a new federal holiday, Juneteenth National Independence Day. For all its promise in recognizing the horrors of slavery and emancipation from bondage, it does not create real change. Nevertheless, we continue to aspire to equality through love when we know with even greater conviction that none of us, even those of us who believe they are the majority or aspire to majority status, are immune to old age, sickness, birth, and death? We’ve seen the futility of political debates about how to heal the planet. What must we do now? Continue to aspire towards equality as bodhisattvas, that is, seeking the good of all instead of the few, and showing up with an ever-enduring love like that of the Buddha that overflows with equality, and not fear and dualism.

Regarding our quintessential commonality, one fear we share is being burned by fire. In Chapter 3 of the Lotus Sutra, there is a parable of a burning manor occupied by a wealthy father, his children, and various creatures. The father represents the Buddha. When the manor started burning, the creatures living there started killing and eating each other. The madness happening in this house is like an extreme version of George Orwell’s Animal Farm. Amid all this chaos in this burning manor, the rich man’s children continued playing in it.

The rich man tried to convince his children to stop playing a game in the fire. Enslaved by their greed and bewilderment, they kept on playing. The father, having failed to redirect his children’s desire through logic, told them that he had more in store for them than the silly game they were playing. However, it was by their faith in their father’s promise for gem-jewel dressed carts, that the children came to their senses, and returned to their father. Their father used skillful means to convince his children with wisdom in knowing there’s a better way. As the Buddha explains this parable to Sariputra saying, “I save all living beings from the burning of the house of the triple world, not by my powers or fearlessness but with skillful means.”

Can we say that this country follows the love of the Buddha?

When the rich man saw his children safe, he gave them, as promised, carts that were even greater than the ones they thought they would get. Nevertheless, what is most important in this story is what he said about his children. “They are all my children. Therefore, I love them without partiality…there should be no discrimination.” The rich man not only represents the Buddha, but also love, equality, and impartiality.

If the U.S. is like a burning manor, with echoes screaming of majority entitlements, the disregard for Black people, and the state of inequality, can we say that this country follows the love of the Buddha?

On August 11th, 2017, white nationalists group rallied at a statue of Thomas Jefferson at the University of Virginia. They were screaming the phrase, “They will not replace us!” On January 6th, 2021, we witnessed Trump supporters and white nationalists rioting at the country’s capital. Seeing this reminded me of when James Baldwin wrote, “In the faces of those screaming people in the South, who are quite incapable of telling you what it is they are afraid of…. but they know they are afraid of something, and they are so frightened that they are nearly out of their minds.” We all fear the fire of the burning manor, with many of us losing our minds unwilling to stop playing childish and dangerous games.

Who is listening to the “parents” of our country trying to coax their children, our fellow citizens, towards the safety of impartiality? Can there really be political integrity without love rooted in the Buddha’s love? On April 9th, 2019, Senator Cory Booker’s Senate Bill S. 1083-H.R. 40 titled Commission to Study and Develop Reparation Proposals for African-Americas Act was only read twice before congress with no discernible movement. H.R. 1280 George Floyd Justice in Policing Act of 2021, a bill addressing policing, practicing, and holding law enforcement accountable, has not passed the Senator floor. Congress represents the various creatures eating each other in the burning manor obsessed with greed despite the danger to us all, thus, it is our government that is on fire!

The love of the Buddha is not rooted in the act of bestowing symbolic gestures and offering platitudes, but setting out specific ways to support skillful means to benefit all. However, as Black communities enter the gates of Buddhism, there may be Black cultural elements added to Buddhism. To some, this may seem parallax compared to more traditional forms, but as long as it runs parallel to the Buddha’s teachings and includes practices according to His love, then we are all in one accord. Let us make sure we, as Buddhists, are waiting outside the burning house with open arms as people take leaps of faith in the teachings of the Buddha, therein seeking the love of the Buddha.

Johnny Edward Dean Jr. is a writer and podcast host of "This is Buddhism my Homie", and a practitioner of Nichiren Shu Buddhism who currently resides in Tucson, AZ.