Ira Sukrungruang’s prose voice is funny, poignant, wise, and poetic – as you know if you’ve read the three creative nonfiction pieces that he has written for the Lion’s Roar: Body and Me, Playing with Buddha, and Dead Like Me. So it’s no surprise that his poetry has the same flare. What follows are two excerpts from In Thailand It Is Night. 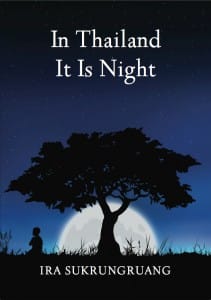 What I Want to Remember in the Next Life

That each morning begins with birds.

That spring evenings wake tree frogs into chirping frenzies; that their sound is the metronymic beat of your sleep; that you enter symphonic dreams of crescendo croaking.

That the beagle next door bays to be let in; that it loves its little girl to the point of squeals; that this love is limitless.

That once you were a boy and did boy things and your father and his callused hand touched the back of your hare neck and squeezed, and it felt like he was passing all he had into you, all his other lives, all his other sorrows, and when his hand left what remained was its phantom warmth.

That once you rolled out of a moving car with a doughnut in your mouth; that the accident was so quick you didn’t shop chewing.

That your dog brings her velvet head under your hand, even when you are despondent because the world has broken its promises.

That the green before the storm is the quietest time on earth.

That the swallowtail kites fly linguistic patterns in the open sky; that they arrive once a year with an invisible message; that this message is as mysterious as a geode.

That Buddha was a lost prince before he became Buddha; that his story has a beginning and an end and a beginning.

That time never moves backwards but memory does and what was lot could he found again; that if you whisper remember, remember, you will find what it is you are looking for, like the gecko that clings desperately to the tree in a storm, trusting it won’t blow away but climb from this life to the next and to the next.

Begin
with a joke
about the yellow
man who crossed the road
and the chicken that stood
in devouring grass.

My father cut grass
every weekend. Before he began
he stood
above the mower, contemplating. Teens played a joke
on our lawn, bleaching it. For some reason, our road
was always filled with cars on Sundays, yellow

ones that reflected the yellow
sun, and as my father mowed, the mower spit dead grass
and rock against car doors, leaving dents. Afterward, the road
was filled with yard detritus, upswept, carried off by wind. Begin
with a joke
about a yellow man who mowed a dead lawn till he could hardly stand.

What stood
in my way was Cowardice, yellow
and large like a star. My friends joked,
high on grass,
about my eyes, slits, the weight of weed beginning
to make the metaphorical road

fuzzy. I forgot where we were or what car I rode
in. What stood
in my way was the mountain I was beginning
to climb, because I was yellow
too, like the grass
my father cut, like my father, and the joke

about the chicken is the joke
about the yellow man, crossing the road
towards the devouring grass,
hoping to find safety. What stands
in front of you, father and son, are more roads, and yellow
road signs. Where do you begin?

The grass was not a joke
we wanted to remember. Forgetting is difficult. Begin with a road
and a man standing with the belief that the yellow line will lead
somewhere.

Ira Sukrungruang is the author of the memoir Talk Thai: The Adventures of Buddhist Boy and the co-editor of What Are You Looking At? The First Fat Fiction Anthology and Scoot Over, Skinny: The Fat Nonfiction Anthology.