In the wake of 9/11, Zen teacher Norman Fischer wrote this essay about bearing witness to tragedy, calling on Americans to peacefully open their hearts to suffering — a message that remains relevant in all times of trouble. 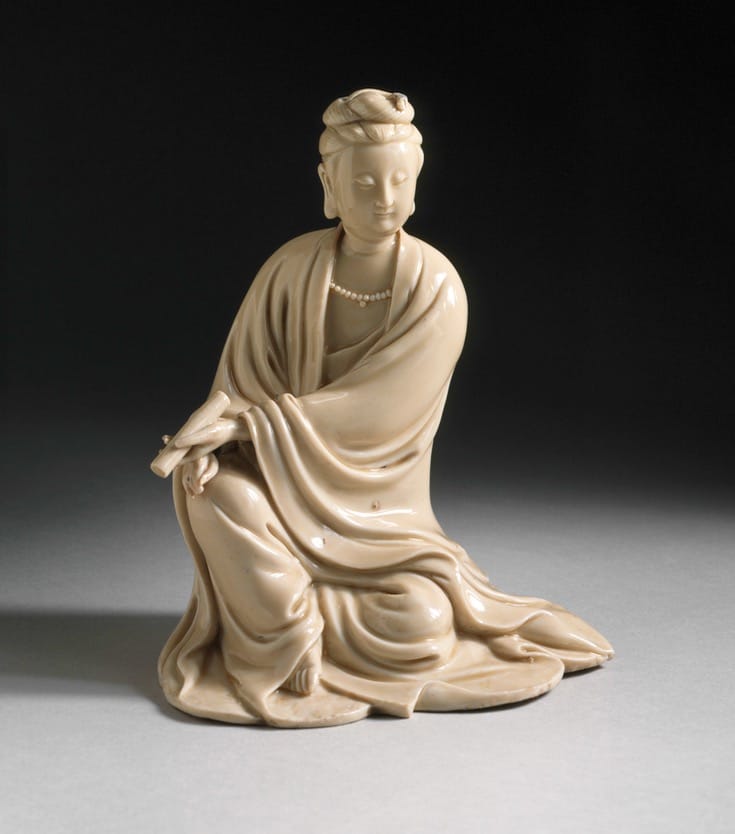 In the Surangama Sutra we hear of Kuan Yin, the bodhisattva who through the power of her practice of listening is able to hear deeply the cries of the world. She hears these cries with a still and perfect serenity, and she understands that they are all manifestations of the perfect light of enlightenment. Because of this she remains peaceful and is able to offer exactly the right kind of help to beings, according to the situation.

I suppose we all are and aspire to be Kuan Yin. But also we aren’t Kuan Yin. We are human beings and so when we confront the stark realities of the delusion of human violence, we cringe. We aren’t serene. We get jittery and angry. We feel grief and anguish, terror and disorientation.

I don’t think we want not to feel these things. If we are human we do feel them and we want to feel them. Maybe we have to be both—both Kuan Yin, who accepts what is with perfect and effective equanimity, and also poor human beings, who find what happens sometimes unbearable and unacceptable. And yet we have to bear it and accept it, because there isn’t any alternative.

Terrible things happen because humans beings act with violence and aggression and delusion. And they do that because they have been hurt.

The day before the terrible attack I was helping to facilitate a meeting about racism and diversity in the Buddhist community. In the meeting we heard many expressions by people of color about their frustration and their suffering. This suffering often is hidden to people of the dominant culture, who have no idea what their brothers and sisters go through in the course of any ordinary day in America. One African-American woman said to the group, “Racism isn’t just eye-holes cut into white sheets. In its most insidious form it is simply privilege itself. When you live in a world structured so that some races dominate over others, some races enjoy peace and prosperity while others suffer terribly, then simply enjoying your privilege unthinkingly is itself a form of racism.”

I do not doubt that something needs to be done in response to these terrorist events. Exactly what needs to be done I do not know—as a religious person it is not my job to figure this out. I do not know what I would do if I had the responsibility. But if the actions taken come out of a wrong understanding of the situation, out of a blindness to the social and spiritual forces that have given rise to it, then those actions will be twisted and ineffective. I have seen this so many times in my lifetime: violence inspiring violence that gives rise to more violence. Wars that end temporarily, only to produce new wars.

The people who hijacked those airplanes and murdered so many people were themselves people. They did what they did because of their damaged hearts and twisted minds. But their hearts became damaged and their minds twisted for a reason. There isn’t any separate evil out there that I can find, blame for all this, and root out of the human family. There’s just one world, one human race. The evil that happens happens for a reason.

I heard a Catholic priest speaking about all this on television. Someone asked him to explain how God could allow such things to happen. He said, it’s a mystery, we don’t know. But I think we do know. Terrible things happen because humans beings act with violence and aggression and delusion. And they do that because they have been hurt, because others have acted with violence and aggression and delusion against them and their families. People do what they do because they are terrified of confronting the pain and anguish in their own hearts. The violence outside of us is an outer projection of the violence and pain we feel inside.

If we externalize such events and their perpetrators, scapegoating them on to some outside force or person, some evil in which we have no part, and then, to alleviate the grief and the impotence we feel, try to stamp out that evil once and for all, this will never work. It is so perfectly clear. The result of this kind of understanding will be more and more violence. Soon after the crisis began His Holiness the Dalai Lama wrote a letter of condolence to President Bush. “It may be presumptuous of me to say this,” he said, “but I hope that the American government will not try to correct the situation with further violence.”

Whenever we have the courage and the calmness to be with life as it is, and therefore, inevitably, to do good… we transform evil into good. This is the human capacity.

But this is what we have been seeing for so long it seems like forever. This disaster in New York and Washington was terrible. But there have been so many terrible things. Almost every nation in the world has felt terrible things like this. The dropping of atomic bombs on Hiroshima and Nagasaki. The bombings of London, of Dresden, of countless other cities. Vietnam, a country decimated. The Holocaust. The genocide of the native peoples of the Americas, of Africans, of Armenians. All the lives lost in those places—we cannot forget about any of them. And now, so close to home, we are feeling the pain of such useless deaths.

There are some people who wonder how there could be such evil in this world. How human beings could generation after generation perpetrate such acts. But I do not wonder about that. To me it seems so very much ingrained in who and what we are. To speak in theological terms, it’s not that evil is out of God’s control and that we, on God’s side, have to overcome it. Good and evil exist on the same plane and operate by the same calculus. Evil is good covered over. Wherever we ourselves, in our confusion and in our unwillingness to look at life as it actually is, with all its pain and difficulty, commit acts of evil, we add to the covering. And whenever we have the courage and the calmness to be with life as it is, and therefore, inevitably, to do good, then we remove the cover. We transform evil into good. This is the human capacity. Evil is not a part of reality that can be excised, cast out and overcome. Evil is a constant part of our world because there is only one world, there is only one life, and all of us share in it.

There are times when life becomes so stark, so absolutely real in and of itself, that there is no thought of meditation practice—just bearing witness to what is is enough, and more than enough. But here I do not mean meditation practice itself. I mean the preciousness of it, all the interesting refinements and developments of the practice that can get so artistic sometimes. It’s all of that which reality often blows out of the water.

But meditation practice itself—the simple practice of being quiet, the practice of listening to ourselves, to the cries of the world, listening deeply with an accurate ear, allowing, opening to what we hear—that practice is more relevant in times like these than ever. There are, in a crisis, a million ways to help and we all should help in whatever way we can. But beyond help, and in addition to it, we need to bear witness to what is happening. To take it in, imagine it, feel it, grieve over it, accept it, not accept it, understand it, fail to understand it, and comfort each other in that. To do that we need to sit, we need the expansiveness of our sitting, as well as of our chanting and our prayers. It seems absolutely essential.