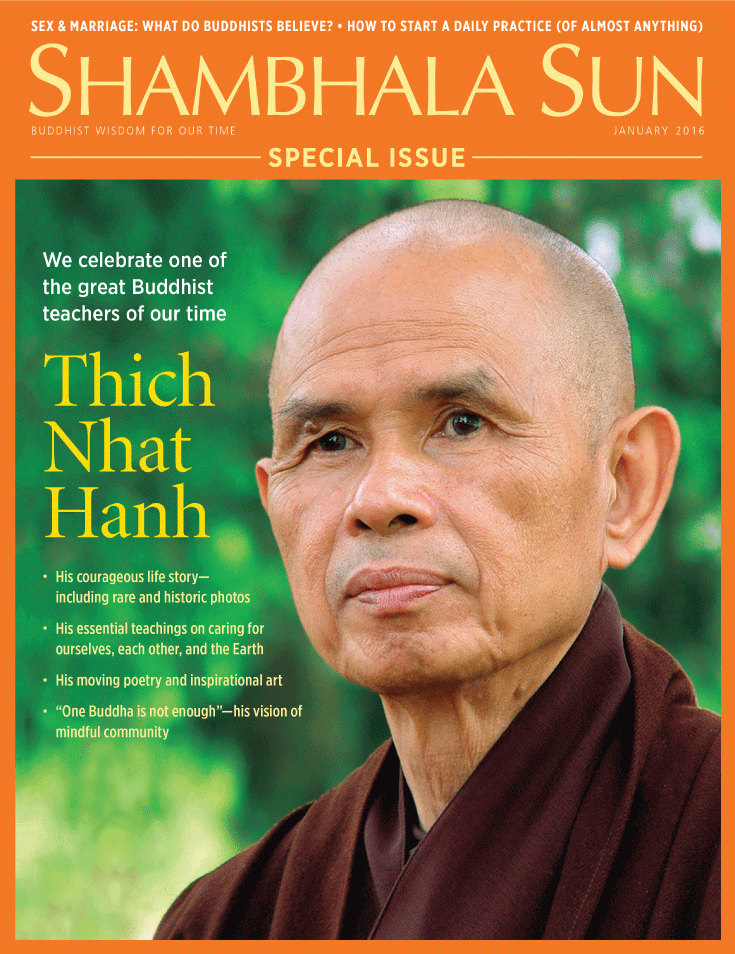 It’s our honor to dedicate the January 2016 issue of the Shambhala Sun to one of the great Buddhist teachers of our time, Thich Nhat Hanh. This special issue celebrates his courageous life, his helpful teachings, his beautiful art and his profound legacy.

His Courageous Life: The Photobiography

From his birth in Vietnam, to monkhood, to his creation and lifelong embodiment of Engaged Buddhism, Lindsay Kyte presents Thich Nhat Hanh’s inspiring story, illustrated with rare and historic photographs from each of its eras:

His Profound Legacy: One Buddha is Not Enough

Rachel Neumann takes you to Thich Nhat Hanh’s community in southwest France, where you’ll meet his closest collaborator, Sister Chan Khong, and members of the new generation of teachers and practitioners who are putting his teachings on mindfulness and compassion at the fore of their lives every day.

His Beautiful Art & Poetry: This Is It

Songs and poems by Thich Nhat Hanh, matched with his famed inspirational calligraphies.

Ready for Another Reality? by Vincent Horn

Idealism for the Real World, with Manny Medeiros

Why You Should Watch Inside Out with Your Kids, by Melissa Myozen Blacker

Hey, That Was My Idea! Norman Fischer responds

Plus: Fischer on taking your mind to the gym

Sit Down and Make Yourself Uncomfortable, by Karen Maezen Miller

Do you think of Buddhism as religion, philosophy, or psychology?

Six Steps to Establish a Daily Practice—Of Almost Anything, by Anne Cushman

Hot off the Press

Seeds from a Boundless Life, by Zenkei Blanche Hartman