The July 2019 issue of Lion’s Roar celebrates His Holiness the Dalai Lama and his important message to the world. Inside, you’ll find Pico Iyer’s look at how the Dalai Lama become one of the most admired moral leaders in the world; a teaching on kindness from the Dalai Lama himself; a profile of The Vagina Monologues‘s creator Eve Ensler; a look at the life, art, and Buddhism of jazz great Wayne Shorter; Buddhist book reviews; and much more. 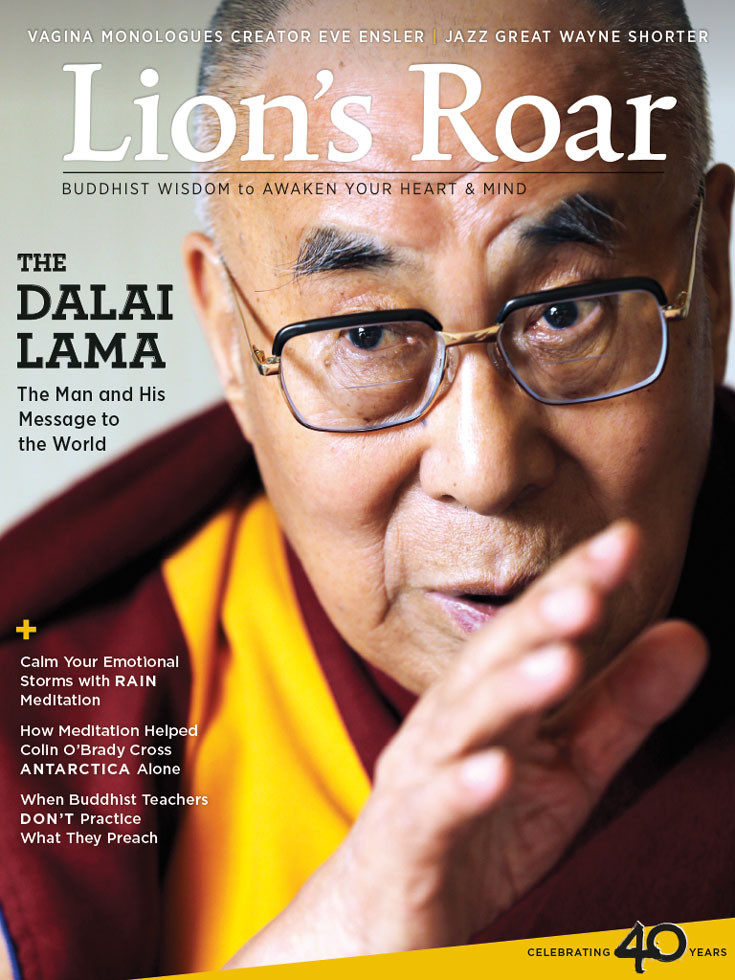 The Man and His Message to the World

Editorial / Welcome to the Issue

On the Side of Our Better Angels by Melvin McLeod

The Best of Who We Are

How did an obscure Buddhist monk become perhaps the most admired moral leader in the world? Pico Iyer says it’s because the man and his message show us the best of who we are as people.

Happiness is Helping Others

Being kind to others, teaches the Dalai Lama, is also the best way to be kind to yourself.

We Are All Brothers and Sisters: Platform for a Human Future

It’s easy to focus on the Dalai Lama’s engaging personality, but we have to listen to what he’s actually telling us. Jan Willis teases out the key points of His Holiness’ message to the world. Our future depends on it.

Meaningful Moments with the Dalai Lama

The Fierce Love of Eve Ensler

As creator of The Vagina Monologues, Eve Ensler changed the way the world regards women’s bodies. Then she started a global movement to stop violence against women. Now, she tells Lindsay Kyte about the long journey coming home to her own body.

Colin O’Brady talks about how meditation helped him bEcome the first person to cross Antarctica alone and unaided.

Rod Meade Sperry looks at the life, art, and Buddhism of the jazz great.

Buddhism: The Next 40 Years

We continue our anniversary series looking at the important issues facing Buddhism. In this issue: Five Buddhist leaders on deepening our practice and study.

What does your home altar look like and why is it meaningful to you?

The Handprint Left Behind by Vanessa Sasson

Bring a New Perspective to Arguments

When Teachers Don’t Practice What They Preach by Tenku Ruff

Can I Love This Too? by Tynette Deveaux

Buddhism by the Numbers: The 3 Doors of Liberation
FAQs: Facts of Buddha’s Life, Teacher Qualifications, Buddhist Grace
Who, What, Where: Zen
You’ll find more Dharma FAQs and other articles for your beginner’s mind here.

Hot off the press

Wholehearted: Slow Down, Help Out, Wake Up by Koshin Paley Ellison