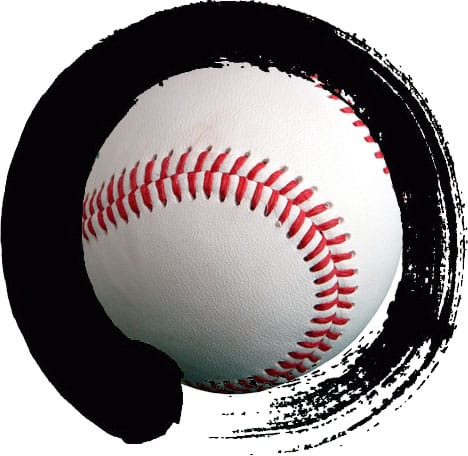 Andrew Schelling calls for baseball’s return to the Zen economy of simple, rough pleasures, to the wabi-sabi spirit of its early years.

In Zen there’s a saying that the bodhisattva’s “play” is saving the world. The questions this brings forth are good: Is Buddhism serious? Is it playful? Is it a game, like baseball? There’s something both distinctive and alluring that Buddhist ceremony and baseball share—adults play with all the engrossed seriousness of children at something most of the grownup world considers meaningless.

Buddhist practice will not become an integral part of American life until it has transformed and been transformed by a number of specifically American pastimes. Only when it has seamlessly encountered American culture and taken on a popular inflection will it no longer seem an exotic transplant. Casting an eye back to Japan—which had a parallel encounter with Buddhist forms in the 12th century—it’s clear that the deep influence of Zen came through its interaction with the martial arts, flower arrangement, archery, architecture, poetry, and chado, or tea ceremony. Not to mention pottery, basketry, and cooking. I want to single out tea for a moment though.

Tea as a formal ceremony arrived from China probably with Buddhist monks, but it initially took hold in Japan as a cultivated activity for the samurai and their warlords. As times changed and the power of a merchant class grew, tea transformed into a prestige event convened by wealthy merchants to display the costly, highly decorative, exotic tea equipment they had acquired. Leonard Koren says in his book Wabi-Sabi for Artists, Designers, Poets & Philosophers, “The sixteenth century tea room was much like the golf course of today for Japanese businessmen. It was where wealthy merchants cultivated new business contracts. It was also where warriors sought and consummated political alliances and celebrated battle victories. (All warriors during this period learned the art of tea.)”

Tea only came into its own under the influence of Sen Rikyu (1522-1591), who broke with the tradition of the wealthy, and even scandalized things a bit. He brought to tea the keystone values that pervade it today and make it the prime example of Zen culture: simplicity, spiritual refinement, and the wabi-sabi aesthetic in which objects are valued for being unpretentious, ungainly, imperfect, irregular, and made of rustic materials drawn from the peasant village.

Baseball in this country has followed a curiously similar track, perhaps with a more unwashed cast of characters. It started with the brash, Walt Whitman-like sons of Abner Doubleday, the legendary inventor of the game—a hard-fought contest for urban immigrants and unrestrained roughs. By engaging in an exactingly formal ceremony, ferociously war-like “clans” could test themselves against one another. Irish and Italians and Poles fought it out on the diamond. Doing so they became Americans. In Whitman’s words: “It’s our game—the American game. It will take our people out of doors, fill them with oxygen, give them a larger physical stoicism.”

Yet the Zen-like approach of simplicity, along with an austere or folksy formalism, has never deserted baseball.

Baseball has through its circuitous windings come to be a game played today by flashy, successful, multi-millionaire capitalists, and Major League baseball appears at moments more about costly paraphernalia and lucrative contracts than the game itself. Its audience along the way has gotten skittish, and every threat of a new strike by the wealthy ballplayers against the wealthier corporate owners comes accompanied with a warning that the sport itself, at its professional level, may collapse. It seems possible that baseball fans may simply turn away in search of more modest pastimes. Perhaps the moment is ripe for a new Sen Rikyu, and a turn to the Zen economy of simple, rough pleasures.

Yet the Zen-like approach of simplicity, along with an austere or folksy formalism, has never deserted baseball. In the 1920’s there was the cornfield hero of Joe Jackson’s day, and big-jawed kids like Bob Feller stepped out of little towns. The blue-collar ballplayer who brings his lunchbox to the park may also be a figure of the past, but he still stands at the yearning heart of the seasoned fan and the radio announcer.

Leo Durocher, Branch Rickey and many others—especially the well-known Yogi Berra—have provided a colorful folk wisdom based on paradox, humor, and tiny sayings that punch through the anguish of everyday life. “When you come to a fork in the road, take it.” Is this baseball or is it Zen?

Baseball also has mysterious “cases” (as they are termed in Zen literature). Did Babe Ruth really point to the seat where his home run would land before swatting it? In the first game of the 1989 World Series, did a hobbled Kirk Gibson, pulling on his uniform in the ninth inning, really tell his coach, I have one good swing in me? Did Nansen really cut that cat in half? Was “Cool Papa” Bell so fast (as his roommate, the peerless Satchell Paige, tells it) that he could switch off the light and be in bed before the room got dark? Is it the wind or the flag that ripples over Yankee Stadium? Is it your mind?

Here’s an important case from the annals of baseball that all practitioners should deeply investigate. They say it happened in 1947 when Branch Rickey, general manager of the Brooklyn Dodgers, brought Jackie Robinson into Major League baseball, breaking the color line. At the Dodgers’ first game in St. Louis, a crowd of curious, bleakly hostile, even violent spectators, rose up when the Dodgers took the field, jeering and cursing the first black player as he stood by first base. Pee Wee Reese, the Dodgers’ all-star shortstop, walked over to Robinson and dropped his arm over his teammate’s shoulder. Just a simple gesture, way ahead of the curve of most of North America. It sobered and quieted the surging crowd.

Hold on to that quiet moment and consider this traditional story. One of the renowned koans of Zen—a case Zen students regularly investigate—comes from the Platform Sutra of the Sixth Patriarch, whose name is Hui Neng. Hui Neng, an unlettered janitor, has just secretly received the robe, bowl and scepter of transmission from his teacher, the Fifth Patriarch, Hung-jen. Fleeing the jealous monks of East Mountain monastery, Hui Neng is pursued by one particularly volatile figure, Hui-ming, who believes Hui Neng carries something of inestimable value. As Hui Neng reaches the summit of Mount Ta-yu, Hui-ming, overtaking him, raises an arm to strike a murderous blow. Hui Neng cries, “Quick! Not thinking good or evil, what was your original face before your parents were born?” Hui-ming stops dead in his tracks with a satori experience.

Perhaps after “What is the sound of one hand clapping?” this question, “What is your original face?” is the most renowned bit of Zen folklore.

Now return to St. Louis, May 1947. There stands Pee Wee Reese, having spontaneously stepped over to his teammate Jackie Robinson, a man whose heroism was still untested. Pee Wee slings his arm around the man he shares infield duty with. What does the gesture say to that jeering, deluded crowd? “Quick! Not thinking good or evil”—black or white—“what was your original face before your parents were born?”

Just as in Zen you sit to be a sitting buddha, children when they play baseball aren’t on their way somewhere. They play ball to be ballplayers.

Where does an American go now to find the Zen economy in baseball I spoke of earlier? Is it still with us? I suspect much of its spirit has drifted south of the border—another “shadow” league—to Mexico, El Salvador, Cuba and the Dominican Republic. Yet it stays here with us too, on the sandlots where children play. Children approach baseball as a practitioner approaches meditation—I mean, it is not preparation for anything, it is not practice. They pursue the endless perfectibility of form. Just as in Zen you sit to be a sitting buddha, children when they play baseball aren’t on their way somewhere. They play ball to be ballplayers.

Remember March and early April 2001, when the Taliban rulers of Afghan-istan first threatened to destroy all Buddhist images in their country, including the enormous cliff-carved buddhas at Bamiyan—and then, in the face of protest from the world, did destroy them? I kept trying to explain to my daughter and her friends what it would mean to have treasures or edifices comparable to those destroyed in North America (this was before September 11). The closest thing I could think of was what if some administration tore down Yankee Stadium (the house that Ruth built), Fenway Park or Wrigley Field? In a country as raw, youthful and full of immigrant peoples as the United States, what else has so focused the aspirations of an entire population? I think we’ve moved past the period when Ellis Island held our gaze. Immigrants no longer come through Ellis Island, and I do not believe the Statue of Liberty reflects what the New York City tourist board wants you to think. More and more I wonder if baseball parks don’t provide the most solid emblem of human aspiration.

When the Boston Red Sox picked up Pedro Martinez in the late 1990’s, that brought the enormous Dominican Republic populations in the United States—Americans, but still Dominican—to the ballparks. It’s a little bit like when, in the 1970’s, Roberto Clemente galvanized the Latin/African-American population and suddenly there existed a team that seemed everything this nation had promised. Baseball, regularly played by immigrants, brings to a focus the hopes, the dreams, the pain, the aspirations and the disappointments of an entire culture. How far is it now to those old buddhas in Bamiyan? What must they have done for the caravan riders who traveled down across the Gangetic plains, or back along the Silk Road and into China. Already Fenway Park is a destination for pilgrims.

Baseball—ceremonial and formal in its own way as a tea ceremony, yet year after year unpredictable. With baseball season heading into October as I write this, weighty questions begin to crop up. Is this the year for the Boston Red Sox? Will the curse of the Bambino never end? Can Pete Rose be given a reprieve and return to baseball? Might a Chicago Cubs player ever savor a World Series ring? Underneath lie more pressing questions. Can baseball rediscover its folkloric precepts and take the fork in its own road? Will it relocate its native simplicity and turn out sages again—living buddhas—the likes of Satchel Paige, Pee Wee Reese or Buck O’Neil?

To the Buddhist I’d turn and inquire, is there any American piece of turf that shares a closer kinship with the meditation hall than the baseball park? Is there a mind in which the two diamonds—that of Buddhist enlightenment and that of the ballfield—are identical? One or two hundred years down the road shall we look for an answer?