Keen observers might have noticed this Sanskrit reference many years ago, but recently J.K. Rowling made public that a key character is related to a Buddhist deity.

There are not many explicit Buddhist connections between Buddhism and Harry Potter. Though Pema Chödrön once called the series’ protagonist a “budding bodhisattva,” recently, a much more substantial connection appeared.

In the trailer for Fantastic Beasts: The Crimes of Grindelwald (the second in a five-part prequel to the Harry Potter series) we learned that Nagini — the evil wizarding lord Voldemort’s pet snake — was originally a shapeshifting human. Now author J.K. Rowling has revealed that Nagini’s story is rooted in Buddhist lore — a secret she says she’s been sitting on for 20 years.

Nagini is what Rowling calls a “Maledictus” — one who carries a blood curse that will eventually turn them into a beast. As a shapeshifter in the 1920s (when the prequels are set), Nagini worked as a circus performer. Eventually, she became a permanent snake, met up with Voldemort, and played a critical role in the Harry Potter series.

The revelation about Nagini’s backstory upset some on Twitter, who noted that there are very few roles for people of color in the Harry Potter series, and the human Nagini — played by South Korean actress Claudia Kim — only reinforces exotic Asian stereotypes. 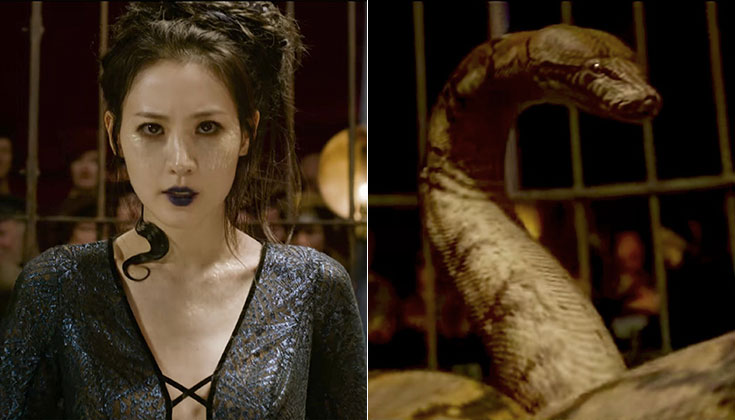 Claudia Kim plays Nagini, a woman who can transform into a snake.

J.K. Rowling responded to that criticism on Twitter, explaining her rationale behind Nagini: “The Naga are snake-like mythical creatures of Indonesian mythology, hence the name ‘Nagini.’”

Anyone familiar with Asian mythology might have made this connection a long time ago. Nagini is the sanskrit word for a female naga, but it’s only with Rowling’s tweet that we now know the naming is actually a deliberate reference.

Prior to their place in Indonesian mythology, Nagas are found in ancient Indian Hindu and Buddhist myth. According to myth, the Buddha gave a great collection of Buddhist literature, the Prajnaparamite Sutra, to the king of the nagas. The Buddhist saint Nagarjuna recovered the texts hundreds of years later — hence the first part of his name. Nagarjuna is an essential forebear to Tibetan and Zen Buddhism and an important figure in the history of Buddhism generally. In Tibetan myth, the mother of the great Buddhist warrior Gesar was a serpent deity named “Nagini.”

Nagas and naginis are highly respected figures in Asian myth, representing wisdom and generosity. In Buddhist cultures today, it’s common to see sculptures of nagas, and snakes are associated with good fortune. There’s even a famous “snake temple” in Myanmar, where visitors make donations to pythons in hope of receiving blessings.

It makes one wonder if the Nagini of Harry Potter is distantly related to the naginis of yore.