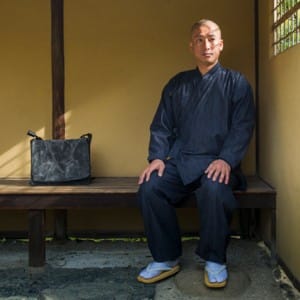 Zen priests who want to be stylish (and stylish people who want to look like Zen priests) need look no further than Bon, a Hiroshima-based fashion house.

According to their website, Bon’s goal is to “create a casual style based on the priest aesthetic.” Using input from priests about the clothes they’d like to wear, Bon added slightly modern, fashionable touches to traditional priests’ clothing. As the company’s popularity grew among priests, Rocketnews reports, they started receiving orders from laypeople as well.

Despite the simple aesthetic, Bon’s clothing doesn’t come cheap. A work tunic and pants, made from bamboo and available in five colors, sells for 27,300 yen (or around $273), while a denim version is slightly cheaper. Other items available include bags, scarves, and a rain poncho. You can check out the full collection on Bon’s website (though you may find it hard going unless you know Japanese).

Bon is hardly the only company taking inspiration (and a little cultural cachet) from the Buddhist regions of Asia. At Paris Fashion Week this winter, for example, Louis Vuitton unveiled a collection of menswear inspired by the Himalayas. Vuitton’s creative director, Kim Jones, visited Bhutan and Nepal after his last show, explaining that he was fascinated by European explorers’ search for Shangri-La. Combining French suits with furs, yak wool, traditional Bhutanese embroidery, and snow leopard designs, the collection was well-received by fashion critics.