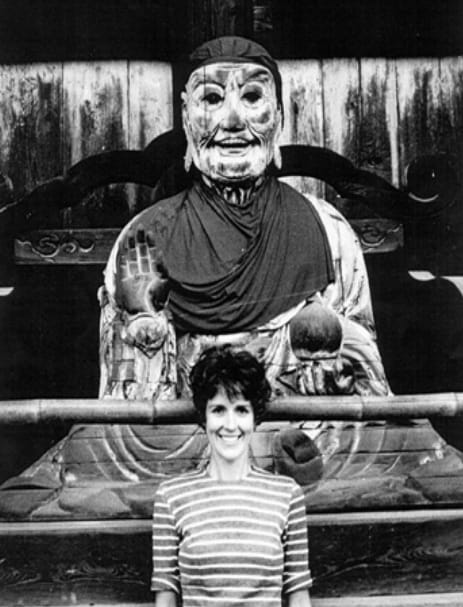 Joanne Kyger in Nara, Japan, as photographed by Allen Ginsberg in June 1963. Photo via the Electronic Poetry Center.

The poet Joanne Kyger, an important figure in the Beat and San Francisco scenes, has died at age 82; no cause of death has been released.

Associated with the poets of the San Francisco Renaissance, poet Joanne Kyger studied philosophy and literature at the University of California, Santa Barbara, moving to San Francisco in 1957 just before she finished her degree. In San Francisco she attended the Sunday meetings of poets Jack Spicer and Robert Duncan, and moved into the East West House, a communal house for students of Zen Buddhism and Asian studies. She lived in Japan with Gary Snyder, her husband at the time, and traveled in India with Snyder, Allen Ginsberg, and Peter Orlovsky. She eventually returned to California.

The Allen Ginsberg Project shares the news of Kyger’s passing, as well as some photos and a poem, here.

Kyger, who sometimes taught at the Jack Kerouac School of Disembodied Poetics at the Naropa Institute in Colorado, remained highly respected and prolific throughout her long career; Zen priest and poet Norman Fischer writes on Facebook of her passing: “Goodbye dear Joanne Kyger, one of the greats. So many losses. So much wonderful work to read again and again.”Author Steve Silberman, who attended Naropa and has tracked stories of several of the figures in its orbit, characterizes Kyger as “Brilliant, subtle, witty, graceful, original, sublime.”

Among her books are 1965’s The Tapestry and the Web, Strange Big Moon: Japan and India Journals 1960-1964, Your Heart is Fine, On Time: Poems 2005-2014, and  There You Are: Interviews, Journals, and Ephemera, which will be posthumously released. Samples of Kyger’s writing from across eras, as well as interviews, can be read at http://epc.buffalo.edu/authors/kyger/