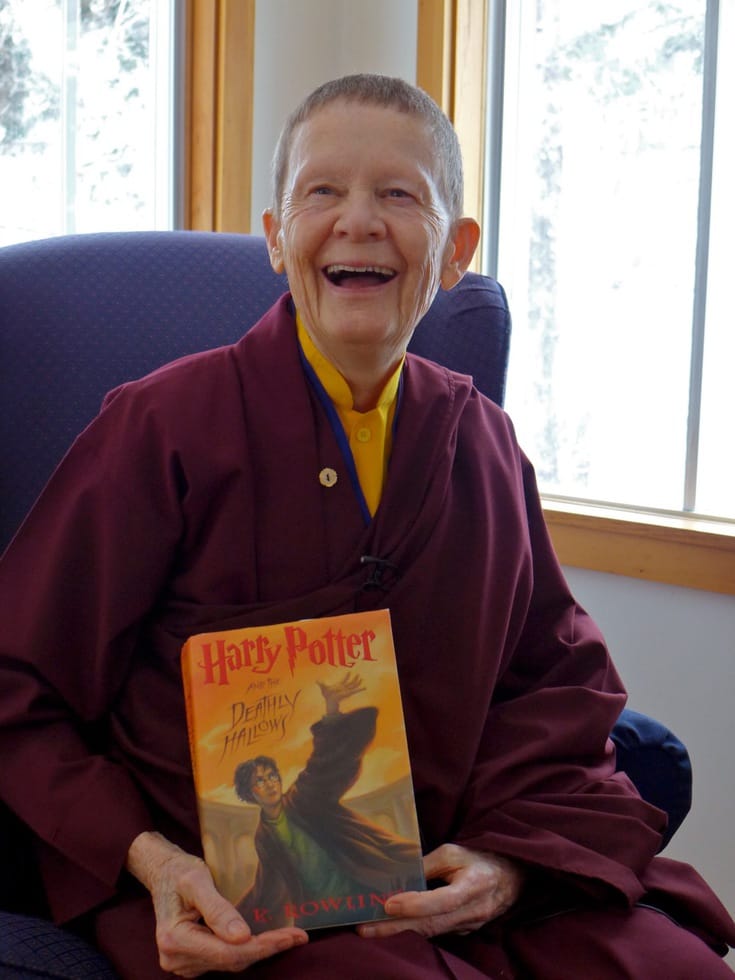 What does America’s most beloved Buddhist nun — who just turned 80! — do when her nerves get fried? Same as the rest of us: curl up with a good book. In her new interview with Lion’s Roar, Pema tells us that her go-to is Harry Potter.

“I just re-read them!” laughed Pema when we asked about the books on her shelf. Pema originally read the series when she was coping with chronic fatigue. “I would feel like I’d drunk a lot of coffee and at the same time exhausted. I found that if I read Harry Potter, I could equalize. It was very helpful in terms of distracting me, in an innocent way.”

The stories share some common themes with Pema’s teachings, focusing on values of compassion, fearlessness, honesty, and equality. About Harry himself, Pema says, “He’s questioning himself all the time, and he’s quite human — he has a temper and anger. But, at the same time, he has this enormous courage and a nobility of spirit. The Dark Lord realizes he can trust that Harry is always going to do the good thing, and he tries to trick him that way. If somebody is left at the bottom of a lake and it looks like they might drown, Harry will give up all that he might win to save them, you know? He’s just like that. It’s a classic hero myth.”

Pema has even used Harry’s courage in her teaching. When writing about kleshas, strong emotions that lead to suffering, Pema invoked Harry to demonstrate the power of compassion.

In essence, kleshas are dynamic, ineffable energy, yet it’s energy that easily enslaves us and causes us to act and speak in unintelligent ways.

In one of the Harry Potter books, the budding bodhisattva, Harry, is put under a curse that creates an extremely strong urge to give in to the kleshas and do harm. The power of Harry’s intelligence and kindness, however, is even stronger. He doesn’t believe the voices of the kleshas or get seduced by their promises of comfort, and so the curse doesn’t work.

In 2015, actor and activist Emma Watson — who plays Hermione in the movies — told Belgian newspaper Metro that she was interested in Buddhism and loves meditating. Meanwhile, the wizarding saga is continuing with the film series Fantastic Beasts and Where to Find Them, a five-part prequel to the books — the second installment of which is due out in 2018.