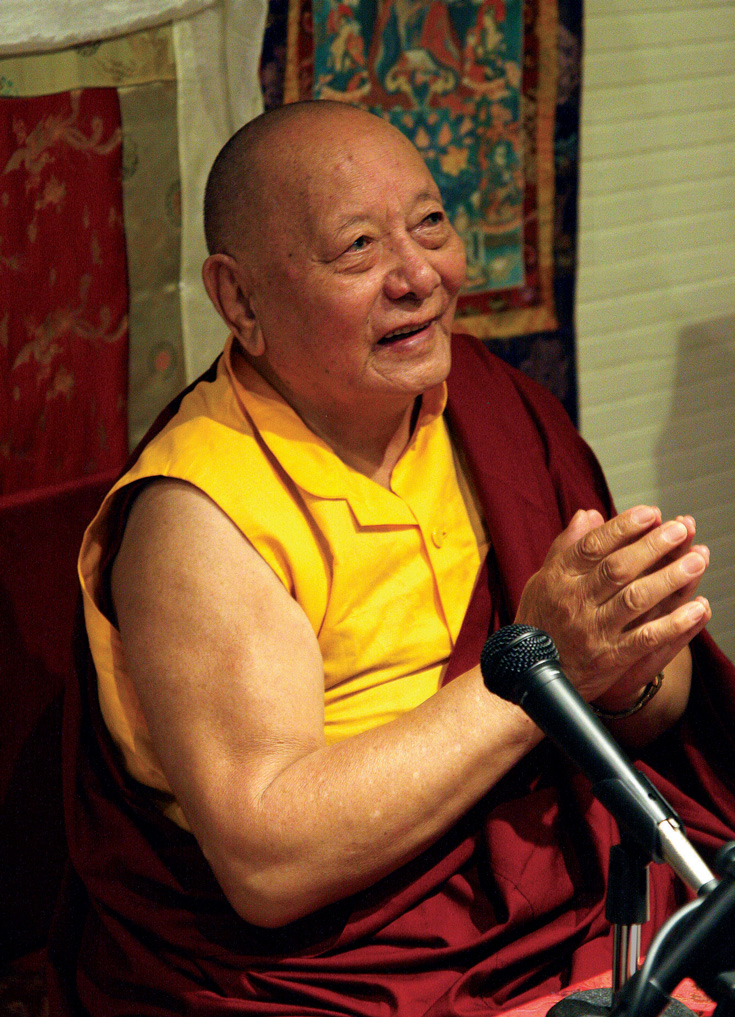 Khenpo Karthar Rinpoche, a master of the Karma Kagyu tradition of Tibetan Buddhism, has died after a brief hospitalization. He had served as abbot of Karma Triyana Dharmacakra Monastery (KTD) in Woodstock, New York — the seat of Ogyen Trinley Dorje, His Holiness the 17th Gyalwang Karmapa; spiritual guide of Karma Thegsum Choling affiliate centers; and retreat master at the Karme Ling Retreat Center in Delhi, India.

From his online biography at Kagyu.org (not yet updated to include information about his passing):

Born in eastern Tibet in 1924, Khenpo Karthar Rinpoche is one of the great living masters of the Karma Kagyu tradition. Rinpoche, who received most of his training and education in Tibet before the Chinese invasion, is highly accomplished in meditation, philosophy, and monastic arts. … After almost fifty years of spreading the Dharma outside Tibet, Rinpoche has a prolific body of work published in English, Spanish, and Chinese.

After fleeing the Chinese invasion of Tibet in a grueling 1958 trek, Rinpoche and companions settled in Buxador, on the border of India and Bhutan, where he remained for eight years as a burgeoning Tibetan community swelled to 1500. In 1967, he was assigned to Rumtek Monastery in Sikkim, the seat-in-exile of His Holiness the Karmapa. While he would depart from Rumtek after two years, staying at monastic centers in central Bhutan and Himachal Pradesh, he did return, mostly remaining there until the Karmapa asked him to become abbot of his new center in New York. He resettled in the US, establishing Karma Triyana Dharmacakra in Woodstock, in 1978. In addition to his many other accomplishments, he would help realize the Karme Ling Retreat Center in Delaware County, New York and the Tashi Gomang Stupa, in Crestone, Colorado.

According to an online post attributed to “Sandy Hu, On behalf of Lama Karma Drodhul (KTD President)”

Khenpo Karthar Rinpoche was admitted to Kingston Hospital on Thursday, October 3rd. He was then transported by medical helicopter to Westchester Medical Center on Friday, October 4th in hopes of receiving better treatment for a blood vessel blockage.

On Saturday, he was returned to Karme Ling in Delhi, where he passed away on Sunday.

Hu’s posting notes that “it has been recommended that students at all the centers do guru yoga and meditate on mixing their minds with Rinpoche’s mind with the aspiration to always be with him life after life. Further information will be forthcoming as to how the public can pay their respects to Khenpo Karthar Rinpoche after the next three days have passed.”