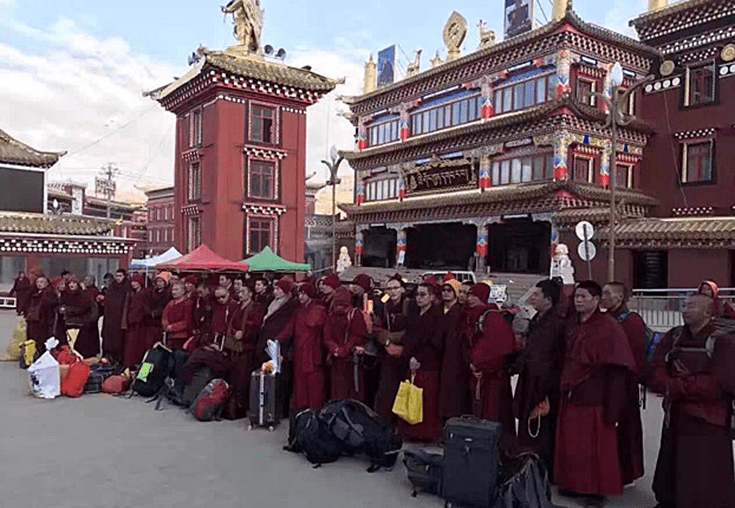 Monks and nuns wait to be taken away from Larung Gar in an undated photo. Via Radio Free Asia.

Evictions of Buddhist monastics at Larung Gar, the largest Tibetan Buddhist institute in the world, are underway, and according to Radio Free Asia, those evicted must sign a pledge to never return to the center.

As Lion’s Roar previously reported, government-sanctioned population cuts and demolitions of over half of the inhabitants and monastic dwellings at the center, situated in southwestern China’s Sichuan province, began in July. The demolitions aim to reduce the monastery’s population, estimated at over 10,000 people, to a maximum of 5,000. Demolition and eviction demands must be met by by October 2017, displacing over half of the center’s monks and nuns, who must now vow to never return.

Radio Free Asia received news from sources in the region that upon eviction, monastics must sign documents pledging to “uphold the unity of the nation and not to engage in behavior opposing government policy in the area.”

A petition on change.org collecting signatures from those who stand in solidarity with Larung Gar has been updated with a photograph of the pledge evictees must sign. 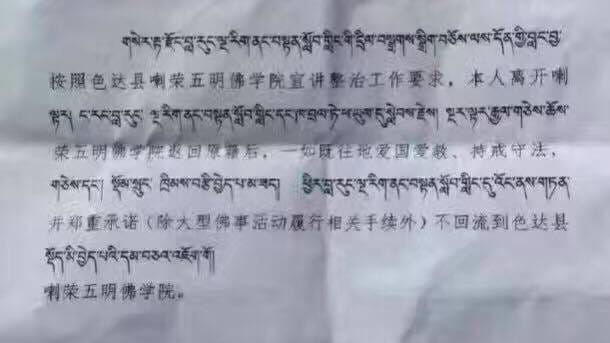 “I solemnly pledge that I will not ever come back to Larung Gar Buddhist Institute again,” reads the document evicted monastics are being forced to sign at Larung Gar. Via change.org.

When China first enforced population cuts at Larung Gar, speculations arose that the demands stemmed from concerns for the monastery’s growing population and subsequent fire risks. The only direct reason given for the demands has been that the community is in need of “ideological guidance.”