Lead to Life repurposes weapons as tools, planting healing seeds for a cleaner earth. From the September 2018 issue of Lion’s Roar.

Rev. Martin Luther King dreamed that people would “beat their swords into plowshares and their spears into pruning hooks.” He dreamed of weapons transformed into tools.

On the fiftieth anniversary of King’s death, Kyle Lemle and Brontë Velez realized his dream. Their organization, Lead to Life, collected fifty guns, repurposed them into fifty shovels, and then used those shovels to plant fifty trees in honor of lives and land lost to violence in Atlanta, Georgia.

Lemle is a Zen Buddhist from Green Gulch Farm and Velez is a Southern Baptist with a penchant for meditation. As 2016 recipients of the Spiritual Ecology Fellowship, they decided to create Lead to Life to combine ceremony and spirituality with ecology and action. “I think the earth is really asking us to pray while working,” said Lemle. “We have to put our values into action outside of the meditation hall.”

I hope my whole life is a practice of decomposition, of reimagining materials of violence into other things.

More than five hundred people attended Lead to Life’s guns-to-shovels event in Atlanta. Lemle and Velez invited families impacted by violence to place gun metal into the forge, which was reshaped by a metalsmith into triangular handles and attached to shovels. Each handle is inscribed with the prayer: “As we decompose violence, may the earth again be free.” Participants planted trees at locations across the city—such as historic churches, sites impacted by violence, and The King Center—using soil collected from lynching sites. 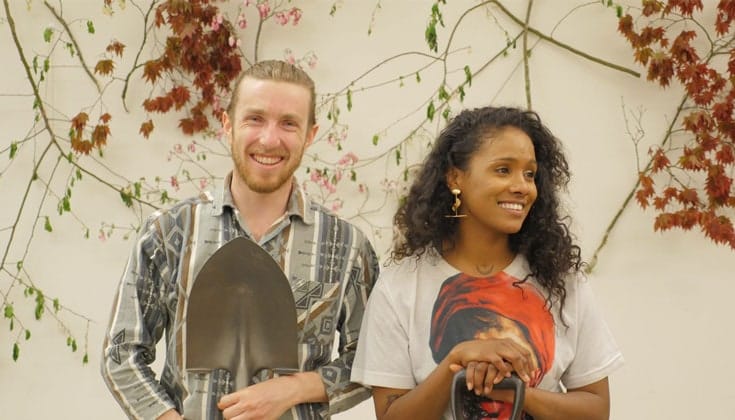 “It was powerful,” said Velez. “I hope my whole life is a practice of decomposition, of reimagining materials of violence into other things.”

Similar to transforming guns into shovels, the three poisons can be transformed into generosity, loving-kindness, and wisdom—qualities that can end suffering.

Lemle and Velez believe Lead to Life is a project of collective liberation. Tools that cause death can be repurposed into tools that cause cultural healing. In 1967, Rev. King preached that everyone is tied into a single garment of destiny. “Our liberation is bound up in the suffering of other people, other species, and the suffering of all beings,” echoes Lemle. “We can’t be liberated until everyone is liberated.”