Buddhist communities and teachers from around the US are gathering together on May 4th for a livestreamed ceremony to remember Asian American ancestors. In an exclusive interview, Lion’s Roar spoke with Duncan Ryūken Williams, one of the gathering’s co-organizers about this important event. 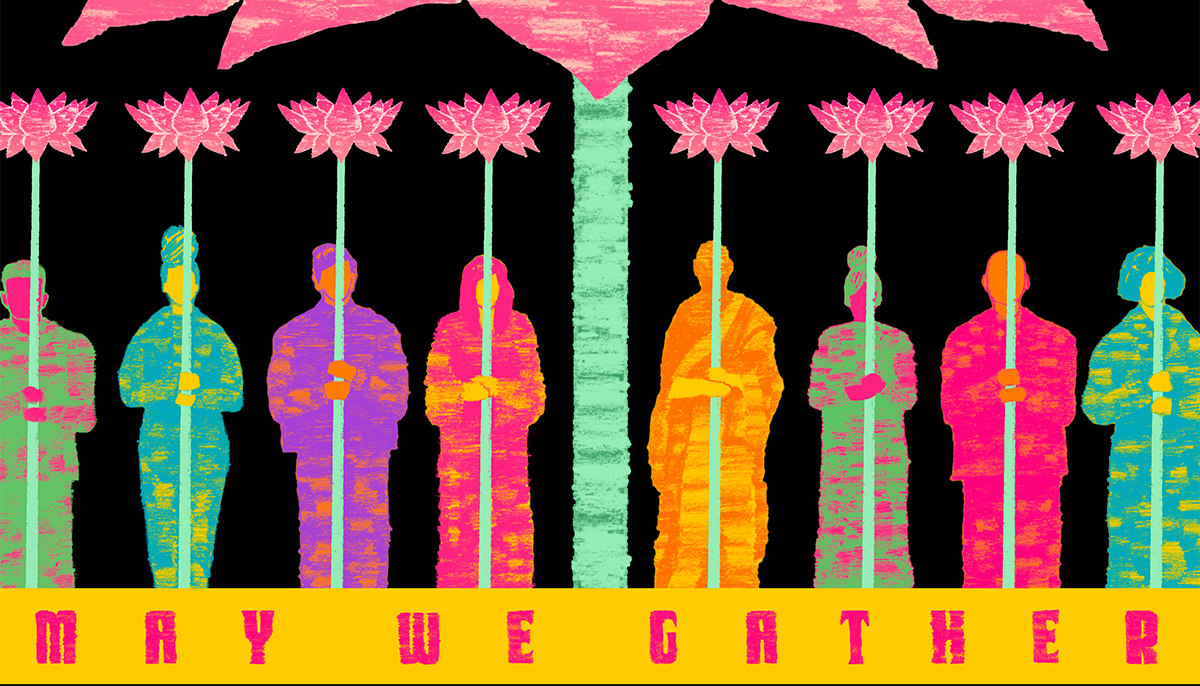 “May We Gather,” a national Buddhist memorial ceremony for Asian American ancestors will be livestreamed on Tuesday, May 4th at 4pm PDT / 7pm EDT. The event is set to occur forty-nine days (seven weeks) from the day of the Atlanta shootings which claimed the lives of eight people, six of whom were women of Asian descent, including 63-year-old Buddhist Yong Ae Yue. As the event’s website reads: “In many Buddhist traditions, forty-nine days after death marks an important transition for the bereaved. As we pray for the liberation of those who have come before us, these ancestors will likewise alleviate our community’s pain, for we are interlinked with each other, across generations, in our collective liberation.”

We have the opportunity to counter violence with equanimity, ignorance with wisdom, hatred with anti-violence, and suffering with healing. — Duncan Ryūken Williams

The ceremony’s co-organizers are Duncan Ryūken Williams, Funie Hsu, and Chenxing Han – names likely familiar to Lion’s Roar readers and to those following discussions of Asian American Buddhism today. During the ceremony, sutras will be chanted, the names of ancestors will be recited, and leading Asian American Buddhists will share their dharma perspectives regarding racial karma in the US. The organizers hope the gathering will help those who are grieving remember, repair, and liberate together.

Higashi Honganji Buddhist Temple in Los Angeles will host the livestreamed ceremony. In February of this year, the temple was vandalized — an act corresponding with the rise in anti-Asian violence occurring across the nation — when windows were broken, lanterns smashed, and the property set ablaze. The temple was temporarily closed and is being restored after a groundswell of community support.

Duncan Ryūken Williams, author of American Sutra: A Story of Faith and Freedom in the Second World War, spoke with Lion’s Roar about this important gathering.

Asian American and Pacific Islander (AAPI) communities have witnessed spikes in violent attacks over the past year. Why is a Buddhist response so uniquely important at this moment?

The recent uptick in anti-Asian animus is part of a much longer history of exclusion and violence perpetrated by those who believe that America is essentially a White Christian nation. The animus has often involved the conflation of race and religion, such that Asian Americans of the Buddhist, Sikh, Hindu, and Muslim faith tradition often were doubly targeted. The recent vandalism of Buddhist temples in Los Angeles like Higashi Honganji Buddhist Temple and in Orange County, where six Vietnamese American Buddhist temples were vandalized in under a month, including one which had a statue defaced with the word “Jesus” spray-painted on it worry the Asian American Buddhist community along with the individual attacks such as the deadly assault on Thai Buddhist Vicha Ratanapakdee in San Francisco. When we see the video footage of the attack on him, we wonder if it’s safe for our community’s seniors to simply go out on their daily walks. Of course, it’s not just because members of our community are directly affected, but we Buddhists, of whatever heritage or lineage, can help our Sangha face these attacks of hatred and violence by drawing on our teachings and practices. We have the opportunity to counter violence with equanimity, ignorance with wisdom, hatred with anti-violence, and suffering with healing.

In gathering to remember Asian American and Pacific Islander ancestors, what effect do you hope to have on younger generations of AAPI who attend?

The National Buddhist Memorial Ceremony for Asian American Ancestors on May 4th aims to recall not only those who have recently passed away, but remind younger generations of our Dharma ancestors who built American Buddhism from as early as the 1850s. While they too faced exclusion and violence and had their temples desecrated and set ablaze, their example of rebuilding and repairing can teach us how our Buddhist faith provides us with resilience when we are told we don’t belong. Each generation inherits the racial karma of our nation. The suffering gets transmitted in our bodies and minds. The Buddha’s teaching is all about how to work with what we karmically inherit to alleviate suffering not only for ourselves, but for all beings.

The gathering will offer those attending the chance to “heal in ceremony” – can you speak in further detail about this ceremony? How will the ceremony’s component parts help the attendees heal?

Healing is to face our suffering. This includes our collective suffering as a community and a nation, directly and courageously, even if it’s difficult or uncomfortable. The deeper dimensions of healing require us to bypass the surface level of the cognitive mind and effect a transformation in an embodied manner. A Buddhist ceremony such as the one planned for May 4th provides a way to do just that.

How, personally, have you processed the tragedy of the Atlanta shootings and the increased violence against AAPI? How has your Buddhism helped during these difficult times?

When I learned that among the victims of the Atlanta shooting was a Korean Buddhist woman Yong Ae Yue, who worked at the Aromatherapy Spa, I somehow felt a karmic connection to her and her children, who are mixed-race individuals like me. Her Korean-Black sons remember her as a selfless person who stood up against discrimination and always advocated for treating people right. They also reflected on the fact that their family was not fully accepted in either the Korean or African American communities. How does one deal with histories of exclusion and moments of extreme loss?

I recall the phrase attributed to Bodhidharma, the founder of my lineage of Buddhism, rendered in Japanese as “Nana korobi ya oki” (Seven Times Falling Down, Get Up Eight Times). We can view this teaching as one about how to re-focus one’s mind during meditation when one’s mind inevitably wanders, but it’s also a powerful teaching that whenever life knocks us down, our Buddhist practice is just to get back up. It’s a simple and direct teaching, but not so easy to do. My way of getting back up is organizing a memorial ceremony to fall on May 4th, the 49th day from the Atlanta shooting. In many of our Buddhist traditions, we believe that on the 49th day after someone dies, they depart to a different realm. In that moment of transition, I hope sangha members from many different Buddhist lineages will join us to help us with the transformation for not only one family, but for our entire community.

You recently gave a lecture for Harvard University’s 2021 Buddhism and Race Speaker Series in which you proposed a Buddhist approach to the work of repair and building a nation that “values multiplicity over singularity, hybridity over purity, and inclusivity over exclusivity.” How does this gathering gesture toward repairing and building?

The work of repairing America’s racial karma is to face the trauma directly and use our Buddhist teachings and practice to transform and heal. We can’t merely be anti-racist and know what we are against, but we must re-imagine a nation by declaring what we are for. If there are those who tell us that we don’t belong, that America is essentially a White Christian nation, we must have an equally clear and compelling case that America – in the words of the great abolitionist Frederick Douglass – is a “composite nation” or in Buddhist terms, a nation that is changing and composed of multiplicity. We are a multiethnic nation and a religiously plural and free one too.