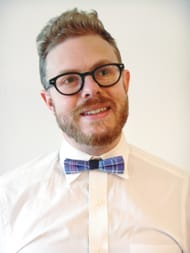 There are many interesting and important voices that aren’t always heard in the mainstream dharma discourse. So in this issue we’re launching a new department—Let’s Talk—welcoming a broad spectrum of writers and readers to share their diverse experiences of American Buddhism. Lodro Rinzler kicks things off with his thoughts on why it’s essential to cultivate and support young dharma leaders.

The other day I received a call from a friend who had run a query on the Shambhala Buddhist database looking for authorized teachers under the age of thirty-five. There were six of us. When I heard this, I was discouraged. Then I contemplated the fact that this likely wasn’t much different from other Buddhist communities in North America, felt consoled for a moment, and then further defeated.

Over the last ten years that I’ve been teaching meditation I’ve learned one simple rule about young people feeling welcome at a meditation center: like attracts like. If you have no teachers of color, for example, then when a person of color walks in the door and sees no role models they feel this isn’t a place for them. Similarly, when there are no female leaders. Or, as is often the case today, no young leaders. When newcomers do not see someone in leadership that reflects them, they do not see a place for themselves within the community. This is not a Buddhist thing. This is a community thing.

I should preface this by saying that I have been blessed with amazing opportunities. Straight out of college I was hired to serve as the executive director of the Boston Shambhala Center. Looking back I think to myself, I wouldn’t have hired me. I had no skills, no management experience, and was naive about nonprofit work. Still, the board of directors took a gamble on me.

Right before I moved to Boston, a senior teacher whom I respected a great deal told me that I was only hired as the director of the center because the board wanted a puppet to do their bidding. He had no faith in me as a young leader. I would learn that he was not alone.

I remember addressing the community for the first time. “The one promise I can make to you is that I will be genuine and fearless. I may drive this place into the ground,” I said, “but I will do it genuinely and fearlessly.” Thankfully that was not the case. Within the year I, alongside the best mentors in the business, transformed a center that was running a deficit of $5,000 to $10,000 a year into a flourishing, welcoming, financially stable center. It hasn’t gone into the red since.

This is not to say there weren’t major hiccups along the way. I remember sitting at a board meeting, looking over the next year’s budget projections. One board member pointed out that typically, when program income went up, so did expenses, but I had income going up and expenses down. “Can you tell us a bit about why you are projecting these figures?” he asked. “Yes,” I replied, “It’s because you hired a Religious Studies major straight out of college with no budgetary experience at all.” We all had a good laugh (thankfully) and I received mentorship on how to handle the finances of the center.

Within this welcoming and supportive environment I was able to flourish. No one held it against me that I was twenty-two, or that mistakes would happen. As one of my heart teachers, Khenpo Tsültrim Gyamtso Rinpoche said, “By making mistakes and more mistakes, one enters onto the right path.” I was fortunate enough to be embraced by a community that knew this all too well, allowed me my mess-ups, and nudged me onto the right path over and over again. At the end of my tenure at the Boston Shambhala Center I felt I had served my community effectively, and in doing so had been a role model for other young people.

In the years since then, I have served Shambhala in a variety of capacities. I have continued to make real mistakes, had wonderful successes, and received mentorship. I doubt this particular pattern will change as I continue on my path of leadership. The key difference I would say between my story and the story of some other young people in Buddhist communities is that I didn’t listen to anyone who said I was too young to lead, or too green to be genuine and fearless.

We need to have more faith in young people who practice the dharma. If you want to have a sangha comprised of forty- or fifty-somethings, keep empowering only your forty and fifty-somethings as leaders in your community. But if you want to reach all ages, then take the gamble and appreciate that even us young things may have something to offer, and that we can be just as genuine and fearless as you. Young sangha, it’s our responsibility to step up. Older sangha, it’s your responsibility to mentor us so the dharma can continue to flourish for generations to come.

Lodro Rinzler is the author of four books, including The Buddha Walks into a Bar: A Guide to Life for a New Generation. He writes from his apartment in New York City, which he shares with his dog, Tillie, and his cat, Justin Bieber.