Yes, it is. And it runs the gamut. Some of it’s artier, some’s goofier, some’s pure expression, some of it is capable of conveying real dharma — if we’re willing to listen. Of course, it can be heavy, hectic, screamy music, so it’s understandable why many may not be so willing.

But there are rewards. Like a Buddhist thangka, the music can be fiery, contemplative, challenging, inspiring. If you like learning about music subcultures, this can be a fun one, whether you’re a metal maven or not.

And, while I do claim above that Buddhist Metal is “a thing,” that’s not quite true. It certainly isn’t a “movement” or an actual genre. It’s not a stitch as “established” as, say, Klezmer, much less Christian Rock. And I wouldn’t want my band to be pigeonholed as “Buddhist Metal” (it isn’t), so I’m not saying we should be slapping labels around all willy-nilly.

But there are a handful of bands that seem to be gravitating to dharma and its imagery — trading on its exotic appeal sometimes, sure (see my post, “Heavy Metal Dharma Thunder” for ten of the best and oddest uses of Buddhist imagery in metal-album art) — and they can be pretty interesting.

Sadhaka: In addition to “Cascadian [as in, Oregon] Black metal,” this band’s website tags its music with descriptors like “dharma,” “metal,” and “Vajrayana.” And song titles from Sadhaka’s four-track LP, Terma, include “Padmasambhava,” and “Impermanence.” Accordingly, the music and the words are dharma-focused, intense, and quite heavy. Terma‘s lyrics aren’t included on the Sadhaka Bandcamp page, site but I reached out to the band, who kindly provided them. Some samples follow, and you’ll see: this isn’t lightweight stuff. First, the opening stanza from “Impermanence“:

Every mountain towering
Each drop of water in the sea
The stars that fill the endless sky
Each and all will cease to be
Every moment of this life
Count among your numbered days
For all that is, has been, and may still be
Arises, dwells, and fades

And, from “Padmasambhava,” named for the figure, also known as Guru Rinpoche, credited with bringing Buddhism to Tibet:

Padmasambhava could speak with the voice of a demon
Had passed though fire and death, and been reborn, rendered indestructible

The temple, protectorless, had nearly been devoured by the darkness
And only one who knew his own darkness would suffice

And when he came to the land of snow, with its ancient ones full of wrath
He approached them not as a master, but a friend
And now the temple walls built by day through the toil of the hands of men
By night, the gods extended to the sky

Want more? You can hear and buy all of Sadhaka’s music here. 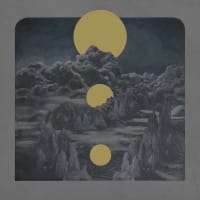 It’s not the first time they’ve sampled him, but the forthcoming YOB album, Clearing the Path to Ascend, begins with the sound of philosopher and Zen advocate Alan Watts saying, “Time to wake up.” Fitting, for such a spiritually minded band. And then there’s the fact that YOB possesses the sheer aural power to blast you right out of bed. As for the lyrics? I guess we might not know what they say until the album comes out. For now, you can stream the LP at Pitchfork, here.

And again: to suggest that YOB is “Buddhist” isn’t really fair, for, as I explained in an earlier writeup about the band, YOB’s leader and songwriter Mike Scheidt seems to lean more toward Hinduism in practice, though he most definitely takes inspiration from Eastern religion and mysticism across the board. 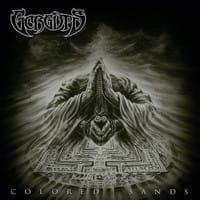 If you were going to present Buddhist-influenced ideas by way of music, you probably wouldn’t think of a genre called “tech-death” as being the ideal vehicle for doing so. But it sure seems to have worked for Gorguts. (Yes, “Gorguts.”) The stalwart band released their LP Colored Sands (referring to the main ingredient of a sand mandala) last year, and now it’s been nominated for the Polaris Music Prize — i.e., the Canadian Album of the Year.

Colored Sands even features a track called “Ocean of Wisdom” — a translation of the Dalai Lama’s title. So what’s the deal here? As metal fansite MetalSucks sums it up: “the first half of the album is about something both beautiful and spiritual: the selection of the new Dali Lama. It’s actually the album’s second half that deals with more typical death metal fare (specifically, the Chinese oppression of Tibet). That’s why the album cover features hands that are both praying and bound.” The music is very impressive, and it’s clearly demanding of its players; the inclusion of “tech” in the genre’s name isn’t for nothing. But between the music’s freneticism and the Cookie-Monster vocals, well… just don’t expect easy listening. Check it out here. 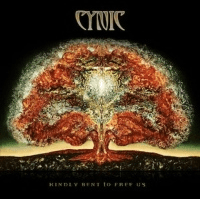 And while we’re talking “technical” we have to mention Cynic. The brainchild of master musician and Buddhist practitioner Paul Masvidal, this is the work of highly skilled players. Masvidal is revered by metalheads, but: is this metal? Some might say no, due to the clean vocals and fusion-y leanings. But this stuff, too, is quite impressive — only “prettier” than most other metallic music. Check out my writeup of the first single from Cynic’s latest LP, Kindly Bent to Free Us, here.

…and that’s just a start. We’re always covering the Buddhism-and-music connection here, so expect more. And not just more metal — we cover it all, from punk to bluegrass to jazz to classical to rap and on and on and on. You can check out all our music coverage here.

* Please note: I’m using the word “metal” quite broadly here, which means that sometimes songs and artists that may be less “metallic” will qualify, because of some relation to the genre or one of its related “scenes.” But then, that’s a whole universe in itself…