In this personal story of waking up on the spot, Joan Halifax recalls a lesson that won’t be forgotten. 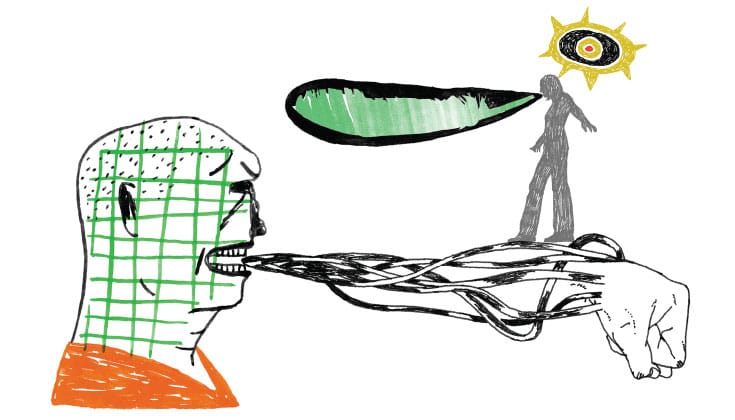 Years ago, I worked as a volunteer on Death Row and maximum security in the prison system of New Mexico.

During this time, I developed a curriculum for mental training for “guests of the correction system.” It was a twenty-week program, which included meditation, ethics, and communication. One of the lessons was on loving-kindness meditation.

On the morning we were to do metta practice, a new person was brought in, in cuffs, to the chapel where “class” was held. He was a huge, rough looking fellow, with a pock-marked face and shaved head. On the back of his head was tattooed “Aryan Brotherhood.” I took one look at him, and thought it might be better to change the lesson for the day. The guard uncuffed him, left the chapel, and soon appeared in the glass guard-box that could only be entered from outside the room.

We began with a check-in. Our new prisoner said nothing, glowering from the sidelines. As we did some stretching, he remained cold and stiff. I then began the mental training portion of the instruction, suggesting to the “guests” that they could have eyes open or closed, depending on what they felt comfortable with. My eyes were wide open.

I began the meditation, asking everyone to settle into the body and recall someone who had really suffered. I then slowly recited metta phrases such as “May you be safe, may you be peaceful…” Not a minute into this part of the program, the new prisoner jumped up to his full height, his face red with anger, and began to shout: “You  f***** b****! You don’t know what you’re f*** talking about!” The rant, and the expletives, continued.

I saw the guard exit the guard-box, and knew he was heading into the chapel to de-escalate the situation. I caught my prisoner’s bloodshot eye, and said with a kind of humorous humility: “You are right. I just don’t like how you are saying it.” The room melted into raucous laughter, and as the guard burst in, he discovered that all was better than all right.

He probably expected to find me cowering in the corner. After all, I did not have time to think about what would shift the situation. Time-bound monitoring, evaluation, and planning were not possible. I think, though, that my years of practice had helped me be alert and responsive to the near-catastrophe I had created! My absence of fear and my words seemed, at least this once, to hit the mark.

I was grateful to finish the session in one piece and with smiles all around.