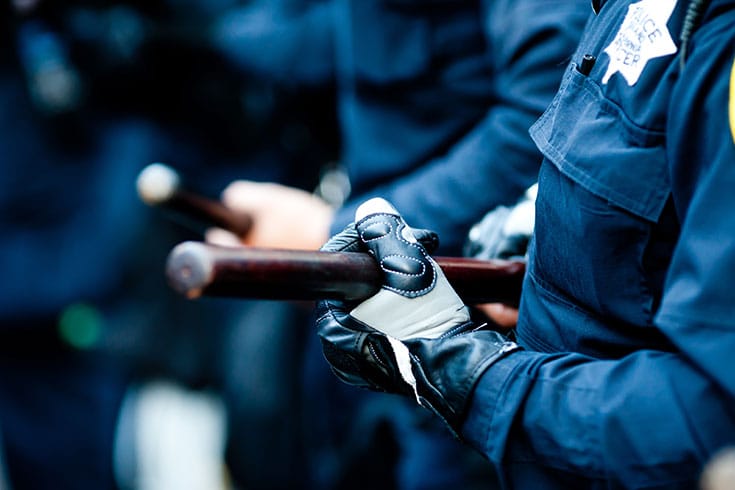 As a Buddhist activist, I am constantly looking for ways to combine my contemplative practice with social engagement. I recently had the privilege of attending a direct action training conducted by Katie Loncke and Dawn Haney of the Buddhist Peace Fellowship. The training was geared toward Buddhists who are interested taking their practice off the meditation cushion to confront injustice. It was a weekend of exploring the ways that dharma and social movements overlap, and the places where tensions sometimes emerge. One area of incredible synergy was a training called Cop Watch, in which we were instructed in how to use our physical presence and our phones to de-escalate police violence.

While that training was not developed by Buddhists, it reminded me of the Zen Peacemakers’ practice of “bearing witness” as part of their three vows. I’d first heard about the Order of the Zen Peacemakers through the Prison Project at my meditation center, where we’d organized some of our own forms of the practice. The Order was founded by Roshi Bernie Glassman after his years of working with the homeless and conducting retreats at Auschwitz. At times of intense suffering, I look to the Zen Peacemakers’ three vows to help me open up to the world as it is, heartbreak and all.

The first of the Order’s vows is not knowing. This means emptying the mind of all preconceived notions about a problem, including how to fix it. The second is bearing witness, which involves staying present with suffering without giving in to the urge to jump in with a solution or turn away in despair because the pain is too much to face. Our minds tend to vacillate between these extremes but there is a vast generative space in between, and if we can challenge ourselves to rest in that gap for a while, the third vow, doing action, is said to flow naturally. If you’ve practiced the first two, it’s said you’ll be able to transform suffering through compassionate action.

This last part is important. The practice of these vows doesn’t heal the world through magic. If the practitioner is present to the suffering of another without wavering, the skillful means for alleviating that suffering is said to become clear. Compassion isn’t merely empathy, but includes a fierce ability to engage with the pain in a way that changes our relationship to it. A lot of the time, our urge to fix someone else’s pain by trying to solve their problem is rooted in a need to fix our own discomfort. By realizing this and prioritizing the act of opening up to our own discomfort and the pain of others, we increase our chance of being in the world in a way that is both compassionate and socially engaged.

As part of the larger weekend of training and practice, two instructors from the group Peoples Justice for Community Control and Police Accountability came to teach us about a practice called Cop Watch. The idea behind the practice is that the police are less likely to use excessive force or arrest someone without cause if someone from the community is gently but firmly monitoring them, either by physical presence alone or with a phone camera. In areas where police violence against unarmed people of color is disproportionately high, Cop Watch can actually be the difference between life and death.

Though doing this is entirely legal as long as the watcher is not interfering with an arrest, police may not always appreciate being monitored. So we role-played staying grounded, calmly asserting our rights when the police attempted to escalate, and continuing to use our presence for the benefit of victims of police violence. Though the Cop Watch training was not created by meditators, there was some clear synergy. Bringing gentle but consistent attention to something changes your relationship to it. This was a very real way that bearing witness could transform a situation.

I was left wondering what else we could bear witness to. Certainly there is no shortage of pain to be aware of. Sometimes as a practitioner of the dharma and an activist, I struggle to know how best to use my practice for the benefit of others. I’m not sure what the answer is, but I know that offering my presence and openness is something the world needs, and it is the least I can offer.

Since completing the Dharma Immersion Program at the Interdependence Project in 2011, Caroline Contillo has been interested in using the lenses of mindfulness, improv comedy, direct action, and science fiction to see how we might co-create a just and joyous world. She teaches meditation at MNDFL, a new studio in Lower Manhattan. She lives in Queens, and invites you to check out her personal site spacecrone.com or follow her on twitter, @spacecrone.